GRMA Day 17: A Surprising Finish to the Day

For a while today I thought all I would have to write about was rain, the World’s Biggest Fly Rod, and some nice but smallish mountains.  I could have probably mined those three topics for enough to fill the blog, but it wouldn’t have been terribly interesting.  And then, once again, the trip turned into an Adventure not of my own making.

Two years ago, when Marilyn and I rode to Alaska, we stumbled on a Native American (Tlingit) festival in White Horse, Yukon Territory, where our First Nations hosts fed and entertained us for the better part of a day.  It was like striking cultural gold.  Well, the same, on a slightly smaller scale, happened to me again today.

I was riding along the Yellowhead Highway, not far from my destination for the day,  looking for a place on the river where I had heard I might see natives using dip nets to catch salmon in a very narrow canyon.  I saw a bunch of cars parked along the road and, at first, thought there might have been an accident.  Then I saw a tent and people milling around and I thought it might be a flea market.  Then I saw the canyon I had been looking for.  So I stopped and asked someone what was going on. 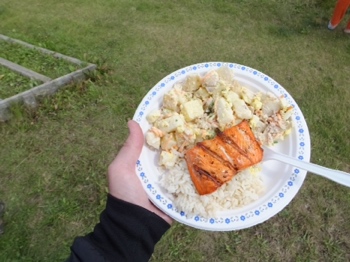 A member of the Moricetown Band of the Wet’suwet’en First Nation told me it was a community celebration of the salmon run and a chance to show non-tribal members (like myself) a little bit about how they live.  “Join us.  Have lunch with us,” she said as she herded me to a line where huge plates of fresh grilled salmon, rice and potato salad were being dished up. While I chowed down on the salmon and sides, I walked to the high bank of the river and looked down on a group of men and women precariously moving on rocks above the roaring canyon.  As I watched, one man pulled up his dip net with a monster salmon that easily went twenty pounds or more.  Others were making similar catches.

Hearing an announcement about the “smokehouse,” I walked down the riverside cliff to a structure with smoke coming out of it.  (I can always spot the obvious.)  When I got there, another member of the Moricetown Band named Stan took me on a personal tour of the smokehouse, explaining how the salmon were impaled on poles and hung on racks to be slowly smoked for several days.  He pointed out that all of this was community effort:  Some caught the fish, some brought wood for the fire, some tended the fire, some hung the fish, some filleted it and let it smoke a while longer until it was nearly dried out.  And for what?  For everyone.  Stan said this was a community event not unlike activities for a thousand years or more and all families who participated shared in the fishy bounty.

This was not just a one-time event for tourists.  This is what they do all during the salmon run so that everyone will have enough food during the winter.  One of the women at the smokehouse shared with me a piece of dried, smoked salmon (salmon jerky, I guess) that was from her last supply from the previous winter.  I was touched, and savored the moment and the salmon.

The pictures below should give some idea of how the fishing/smoking process worked: 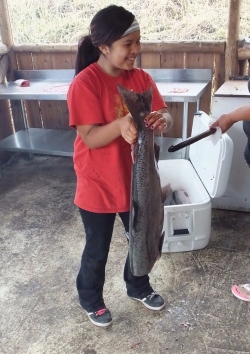 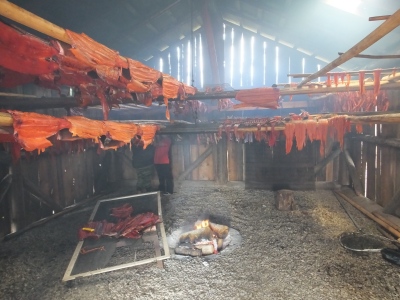 Geologically speaking, I’m no longer in the Rocky Mountains.  I’m in the Intermountain West/British Columbia Interior Range, specifically the Skeena Mountains.  Tomorrow I’ll move even further west to spend a couple days in the Pacific Coast Range before moving east through the BC Interior Range and back to the Rockies. Sometimes its like driving through six suburbs of a major city:  They all look sort of alike but are different enough and have a separate history that warrants their own designation.  Suffice it to say that all the mountains are uniquely wonderful.  And they’re all rocky even if they aren’t all Rockies.

Other pictures I liked from today: 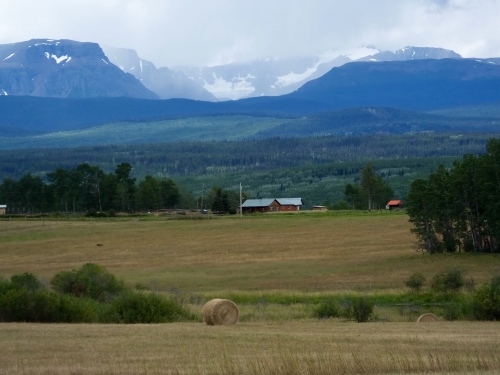 8 responses to “GRMA Day 17: A Surprising Finish to the Day”