The Great Rocky Mountain Adventure has temporarily left the Rockies and is now situated in the Pacific Coast Range Mountains where glaciers and glacier-fed rushing streams abound.  The mountains here in Stewart, BC/Hyder, Alaska have no foothills or preliminaries:  They just rise dramatically and ruggedly skyward.

But the area is also very isolated.  Paved roads only came here in the past 50 years and hi-speed broadband Internet services have yet to arrive.  Consequently, I’m going to post today’s blog as text only and then see if I can add a few pictures.  Each guest at the Ripley Creek Inn, where I’m staying tonight and tomorrow night, is alloted only 75 MB per day, and between communicating home and checking e-mail, weather and news, I’m not sure how much remains.

As I was leaving New Hazelton this morning, Howard, the owner of the Bulkley Valley Motel where I spent the night, suggested I take a short detour to Old Hazelton over a one-lane steel bridge spanning a 262-foot deep canyon.  So I did.  As promised, the views of the canyon and the mountains beyond were outstanding and the bridge itself was an engineering feat when constructed in the 1950s.  I believe it’s one of the highest suspension bridges in Canada.

Following that short detour, I headed west on the Yellowhead Highway for about 20 miles until I reached the Cassiar Highway, which will eventually take me to the Yukon Territory.  About 60 miles north on the Cassiar I veered west to take a side trip to Stewart, BC/Hyder, AK.  Stewart is the northernmost ice-free port in Canada and Hyder is the southernmost town in Alaska and both are surrounded by the soaring mountains of the Pacific Coast Range.  They are also both home to bears–lots of bears.  Grizzlies and blacks.  And throw in a few wolves and a bunch of eagles.  What brings them here?  Salmon, swimming from the Pacific Ocean upstream to spawn and die.

One site in particular a few miles north of Hyder draws hundreds of tourists like me hoping to watch the bears in action on Fish Creek, scooping up salmon at an all-you-can-eat fish buffet.  After I arrived in Stewart and checked in at my hotel, I made a quick run from Canada to the United States to check out bear-watching opportunities.  I caught one quick glimpse of a grizzly but no picture.  I also saw the reason for the bears’ interest in fish creek:  Hundreds of chub salmon spawning in the beds they carved out of the river gravel.  Reports were that another grizzly and several blacks had been there earlier in the day.   I’ll go back tomorrow and hope to have better luck shooting ursus arctos horribilis close up.

Also nearby flows one of the largest glaciers in North America–Salmon Glacier–but travel to it involves about 12 miles of riding on a dirt/gravel road up a steep mountain so I’ll have to scope it out tomorrow and see if its something I think the Ultra Classic can handle. 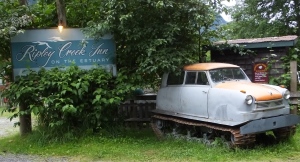 A word about the Ripley Creek Inn.  I decided on this place because TripAdvisor reviews had referred to it as “interesting,” “eclectic,” and “a little odd,” but it was generally well-reviewed and the only other place in town was an older hotel with standard rooms that had seen better days.  As I understand it, the owners of the Ripley Creek Inn purchased several old buildings in the area and had them moved to a location on the edge of town.  A couple houses and an old brothel appeared to have been added to a property which already had an existing but older inn with about 10 rooms in it.  The grounds are scattered with remants of mining machinery and other antiques.    The interior of the building I’m in is also full of antiques, though the room itself is cozy and modern with two big windows overlooking the estuary, which is, in a sense, the interior edge of the Pacific Ocean which lies about 90 miles away down a long fjord. The on-site menagerie includes an psychotic Canadian goose that attacks guests from time-to-time and a rooster that crows about every 30 minutes.  Yeah, I think “interesting” is a good description.

I’m now washing down a $15 hamburger with a $38 quart of Jack Daniel’s.  Isolation clearly has a negative impact on the cost of necessities.