I love traveling in Alaska, the Yukon and British Columbia.  Beautiful scenery, plenty of critters, and lots of friendly people.  But after only three trips, some of this territory looks more than vaguely familiar.  Marilyn and I were on the Yellowhead in 2013.  Last year I was on parts of  it twice when I looped around the Rockies.  And now I’m on it again.  In this part of the world, there aren’t many surface travel alternatives.

One place we visited today was where I had a great experience last year, eating fresh-caught salmon and learning about First Nations culture at the Morricetown Canyon on the Skeena River.  We arrived there about 7:15 and I was afraid no one would be on the rocks that early dip netting salmon.  But a half dozen First Nations Wet’suwet’en fishermen were hard at work when we rode up, pulling salmon out of the river–sometimes two at a time–in their huge, long-handled dip nets.

After a short while, I realized they weren’t keeping the salmon, and Mark noticed a big tube into which they slid the salmon they had just caught and measured, returning them to the river upstream from the falls.  No one was there for us to ask why they were doing what they were doing, but here’s what Mark and I concluded:  Their community subsistence fishing was finished for the year, and now members of the local Wet’suwet’en band were protecting the salmon population by helping a greater number of salmon survive the fast-flowing canyon falls and move into the wider, slower flowing river upstream from the narrow gorge. By ensuring that more fish survived upstream to spawn, they would help replace the thousands of fish they caught and smoked for winter eating, ensuring bountiful harvests year after year for them and for people who lived upstream from them. 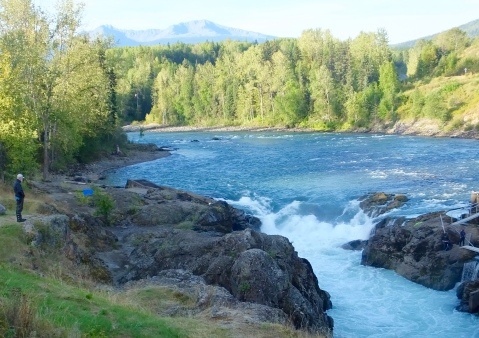 I noted yesterday that things seemed more civilized now that we were on the Yellowhead Highway.  Today we had another example of that.  We groaned and swore into our CBs as we approached our first “Road Construction” “Be Prepared to Stop” “One Lane Traffic” signs.  Those signs for the past three weeks have meant dust, rocks, mud and lengthy delays.  Today, as road crews resurfaced the asphalt without tearing up the road they were resurfacing, our three-minute delay was followed by a short ride behind a pilot truck on freshly laid asphalt.  A very civilized road repair project, indeed.

We passed through a dozen small towns with a variety of services valuable to travellers like ourselves.  We also passed through a countryside flush with expansive hayfields, grazing cattle and other signs of agricultural industry against a backdrop of rolling foothills and small mountains.  Additionally, we passed several lumber processing plants, including one outside Vanderhoof that stretched for a half mile with acres of processed trees and endless stacks of milled 2x4s. 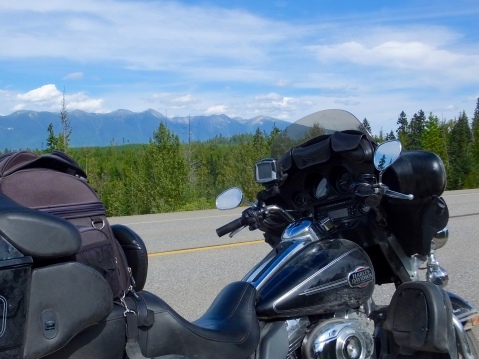 For several hours today as we covered the distance between the British Columbia Interior Mountains and the Northern Rocky Mountains, the scenery varied dramatically from what we had become accustomed to seeing, but, by the end of the day, we were back in the Rockies and within sight once again of towering snow-covered peaks.

I saw two black bears today on separate occasions, but both bruins quickly retreated back into the brush from whence they had emerged when I slowed the big Harley in hopes of a photo shoot.  Sometimes critters pose and sometimes they don’t.

On the pie front: I stopped for lunch at a cafe/museum Marilyn and I visited three years ago that had an extensive pie selection, but as luck would have it, they were closed. Pie makers, like bears, don’t always cooperate.   Tonight, however, I scored a piece of lemon icebox pie for desert.  Commercial grade, but acceptable in a pie pinch.

Tomorrow, on our penultimate day in Canada, we retrace our tracks on the unbelievably beautiful Ice Fields Parkway. Weather conditions are expected to be perfect with sunny skies and temperatures in the 70s.  It should be a great ride with several scenic photo ops.

One response to “Day 35: Familiar Territory”