I knew last winter, long before I began this ride, that a series of dams built beginning in the 1930s and continuing into the 1970s stretched across the Columbia River and the rivers that flow into it.  Some of the dams are above the confluence of the Snake and Columbia Rivers where I was yesterday, but four of them are between Pasco and Astoria, including one of the largest at The Dalles where I am tonight.  I passed two others on the way here:  The McNary Dam (1954) and the John Day Dam (1971).  I understand the need for flood control and the production of renewable hydroelectric power, but the presence of all those dams, as well as those on the Snake River and the Missouri River, have buried hundreds of historic sites related to the presence of the 1804-1806 Corps of Discovery, as well as thousands of Native American sites.  The rivers Lewis and Clark paddled, rowed, sailed and towed their various craft on are gone.

Today I realized something else is also gone.  The air through which Lewis and Clark saw distant mountains, especially in Oregon and Washington, was clear and the horizon could be seen 100 miles away.  Mountains such as Mt. Hood and Mt. Saint Helens which they recorded in their journals could be seen from the right promontories at a distance of 70 miles or more.   I still haven’t seen them and I’m getting close to the Cascades.  I.m not saying I want to endure the rigors they endured, but I sure would like to see the world they saw.

During today’s ride, I stopped at several sites mentioned in their journals, but unlike the sites I saw east of the Rockies and even in Idaho, there doesn’t seem to have been much effort on the part of Washington or Oregon to preserve or interpret Corps of Discovery sites, at least in the western parts of both states.  A couple of roadside historical markers with a paragraph or two was the extent of the historical explanation I saw today.  It reminded me of  the “Kilroy was here” graffiti popular in WWII.

Travel for the Corps was fairly rapid going downstream on the Columbia, as long as they didn’t encounter serious rapids or, especially, waterfalls.  On October 19, 1805, for example they covered 36 miles on a day in which Clark recored a large rock formation shaped like a hat, caught the first glimpse of  the volcanic, snow-covered Mt. Adams and spent two-hours dragging the party’s canoes over a long shoal; before they even began the day on the water they had a two-hour meeting with a chief of the Walla-Walla band and 30 or so of his people to announce their intentions and offer gifts.

Hat Rock was mentioned by Clark in his journal.  In fact, it does strongly resemble beaver-skin hats popular in 1800. The formation is the result of a series of volcanic eruptions that lasted for 10-15 million years and covered parts of Washington, Oregon, and Idaho with nearly 40,000 cubic miles of basalt.  Formations like this are common in the area as erosion during the last two million years washed away the top soil and softer rock leaving basalt formations behind.

I also stopped at Celilo Park, thinking there would be some mention of Celilo Falls also known as the Great Falls of the Columbia, which Clark recorded on October 22, writing I beheld an emence body of water Compressd in a narrow Chanel of about 200 yds in width, fomeing over rocks maney of which presented their tops above the water.  The falls, which had been a prime salmon fishing location and meeting place for tribes in the area for thousands of years, required a strenuous portage the next day by the Corps.  Clark’s description suggests some of the problems they encountered:

I then decended through a narrow chanel of about 150 yards wide forming a kind of half circle in it course of a mile to a pitch of 8 feet in which the chanel is divided by 2 large rocks    at this place we were obliged to let the Canoes down by Strong ropes of Elk Skin which we had for the purpose, one Canoe in passing this place got loose by the Cords breaking, and was cought by the Indians below. I accomplished this necessary business and landed Safe with all the Canoes at our Camp below the falls by 3 oClock P. M.

Today this prime fishing spot, this meeting place for hundreds of generations of native people is completely submerged by the waters behind The Dalles Dam.  A ramshackle group of buildings and a small rock ledge where Natives of four different tribes are allowed to fish with dip nets according to agreements with the Federal government is the sole remnant of the Celilo Falls fishing culture. 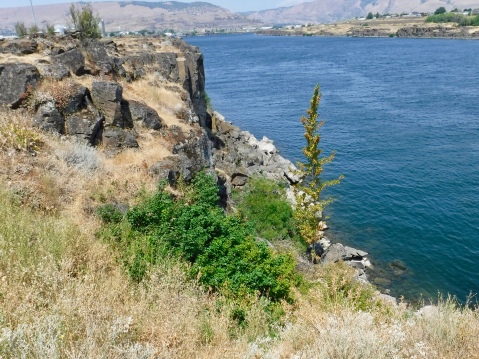 Somewhere under the water is the Great Falls of the Columbia, about which Lewis and Clark wrote extensively.

I had one more stop to make related to Lewis and Clark, and once again, I found that their alleged campsite at Fort Rocks in what is today The Dalles contained several interpretive panels, but nothing else.  One of the problems with determining exactly where they camped is the lack of physical evidence to prove they were in a specific location.  Even the journals and Clark’s mapping coordinates are sometimes at odds with each other, and historians can often only approximate where they might have camped.

I stopped early today and wrote this in the afternoon while the blazing sun raised temperatures to 100° again today.  This evening I’m going to get out and try something different.   If everything works out, I’ll amend this post later today.

[It’s about five hours later and I’m back with a small addendum.]

One of the things I had hoped to do on this trip was get ON the water that the Corps of Discovery travelled on.  The boat trip up the Gates of the Mountains covered the Missouri River, though I still wish I could have made the three-day canoe trip.  Time and money constraints meant I missed the Clearwater and the Snake Rivers.  But tonight, at least, I could check off the mighty Columbia River.  I booked a “Sunset Kayaking Tour” with the Gorge Paddling Center out of Hood River, Oregon.  The plan was to kayak on the Columbia down river from Hood River, but when the kayaks were put in the water at the launch site, the 30 mile per hour wind–which draws hundreds of kite surfers every day to the Columbia River Gorge–made going on the Columbia a little dicey.  So, we paddled up the Wind River, a Columbia tributary,  in the hopes that the wind would abate later on.  Toward the end of the tour, the wind died down enough for Todd, the owner and chief guide, to take me out on the mighty Columbia River, the same one (sort of) that Lewis and Clark and the gang floated down in late October 1805.  The Wind River diversion actually worked well, because unlike the lake-like Columbia, it had a current.  I’m now even more convinced than before that the Corps of Discovery MUCH preferred going downstream to upstream.  I’ll know tomorrow just how sore I’m going to be, but whatever discomfort these old bones feel, it will be worth it to have joined Lewis and Clark, briefly, on their trip down the great western river.

The sun had sunk below the horizon by the time we paddled onto the great river.

The Wind River offered a shelter from the wind.

Paddling upstream was not nearly as much fun as floating back downstream with  a well-deserved glass of Chardonnay.

Lindsey, Todd and one worn out old man.

3 responses to “MHT Day 21: Their Columbia River is Gone”