Today was a day of ups and downs.  Of course, when you’re riding a motorcycle in the mountains there are always ups and downs (and twisties).  But in a more general sense, today had ups and downs as in good and bad.

Good:  Floorboard-scraping ride going down and then back up on U.S. 93 in Idaho from Lost Trail Pass

Good:  Less than 90° degrees this afternoon and a cold beer in Missoula

Sometimes (most of the time?) these posts can be a little confusing.  Today’s may be of that nature, but I’ll try to make the chronologically-challenged nature of my travels today as clear as I can.  I’ve been writing most of the time as if I’m following the trail of Lewis and Clark on their 1804-1805 outward bound journey.  Except, for example, when I followed the Yellowstone River upstream, backtracking on William Clark’s 1806 return trip or when I made an 1877 side trip to Bear Paw Battlefield.

The first part of today’s ride covered part of Clark’s 1806 return trip with another side trip to 1877.

In 1805, just before crossing over the Continental Divide at Lemhi Pass, the Corps had cached some supplies and canoes at Camp Fortunate on the Jefferson River, not far from where I stayed last night in Dillon.  They expected to return to there the following year.  When Lewis and Clark decided to split up after re-crossing the Bitterroot Mountains in 1806 on their way home, Clark took a route that would bring him back to Camp Fortunate but on an easier path than the one they took in 1805.  Today I followed Clark’s 1806 route, only backwards.  Clear?

At any rate, as Clark and his party crossed the Big Hole Valley in 1806 they came to a bubbling hot springs in the middle of the valley.  Clark wrote on July 7,

we arrived at a Boiling Spring . . .    this Spring contains a very considerable quantity of water, and actually blubbers with heat for 20 paces below where it rises.    it has every appearance of boiling, too hot for a man to endure his hand in it 3 seconds. I directt Sergt. Pryor and John Shields to put each a peice of meat in the water of different Sises.    the one about the Size of my 3 fingers Cooked dun in 25 minits the other much thicker was 32 minits before it became Sufficiently dun.

So, I wanted to stop and see the hot springs where they cooked their dinner.  But, I discovered to my chagrin, it’s on private land and no long accessible to the public, even though I could see it from a highway pullout.  The best I could do was a long distance picture of steam rising up from the ground. 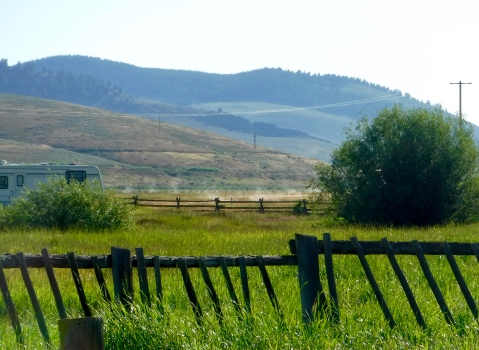 My second stop of the day was also chronologically misplaced, but since I don’t even know what today is, I guess it doesn’t matter if I mix up some events from hundreds of years ago.  This stop had me back on the Nez Perce trail that I first mentioned when I stopped at the Bear Paw Battlefield a week ago.  This was another battlefield during the same desperate cross-country flight of the Nez Perce in 1877.  I knew it was there and expected to stop for 15 minutes, take a couple pictures, and move on.  But the National Park Service has a great interpretive center and, once again, I struck up a conversation with an informed and knowledgable NPS staff member, and then spent time walking on the battlefield itself.  My 15 minute stop took an hour and a half. 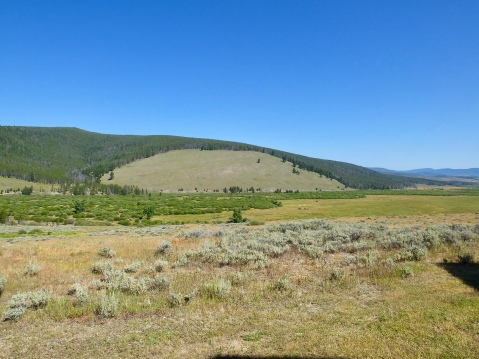 The Nez Perce were camped on the prairie to the right when they were attacked on July 9, 1877. 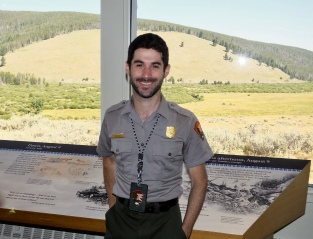 In August 1877, as 750 Nez Perce were attempting to escape pursuing Army troops, they stopped to rest for a few days on a prairie in the Big Hole Valley just over the Continental Divide in Montana.  In the pre-dawn hours of August 9, U.S. 7th Infantry troops and a few civilians attacked the quiet village, shooting men, women and children as they slept in their tipis.  The Nez Perce warriors, led by several warrior-chiefs, recovered from the initial attack, drove the troops back and began a siege which gave the surviving Indians under the leadership of Chief Joseph a chance to escape once more.

The National Park Service has done an excellent job preserving the site and explaining why the Nez Perce consider it sacred ground today and why they hold ceremonies each August commemorating the battle and honoring their people who died there.  Seasonal interpreter Joey Wohl walked me through the details of the battle, pointing out in the landscape spread before us where the action took place.  We talked at length about the different concepts of land and land ownership that separated, fatally it seems, whites from Indians.  After we talked, I rode to the site and spent time trying to image the chaotic scene from 1877. 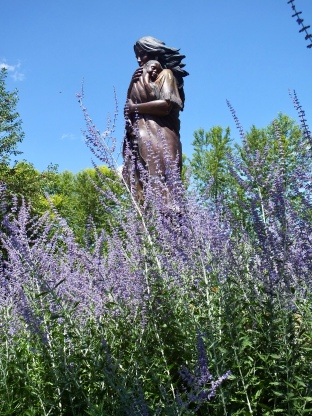 For months, as part of my Lewis and Clark trip planning, I had strongly considered literallyfollowing their 1805 route over the continental divide at Lemhi Pass where an historical marker signifies their achievement.  But after talking with several people who had been there (and paying heed to Marilyn’s importuning), I opted not to challenge the 35-mile dirt and rock, one-lane road over the mountains.  Instead, after leaving the Big Hole Battlefield, I crossed over the divide at Chief Joseph Pass (fitting, no?), continued on to Lost Trail Pass on U.S. Highway 93, then headed down the mountains to Salmon, Idaho, near where Lewis and Clark traded for horses with the Shoshone and where today there is a Sacajawea Interpretive Center.  I had thought this would be an important stop on my educational journey, but I was sorely disappointed.

The small interpretive center and museum, operated by the town of Salmon, didn’t offer any new information about Sacagawea, repeated several myths that have grown up around her, and sugar-coated parts of the story that could have been dealt with more honestly.  I’m hardly an expert on her or the Lewis and Clark expedition, but I’ve learned enough in the past year to know when its history is being presented through distorted lenses.    Tourists who know little about the expedition can learn some important truths at this center, but scholars seeking to expand their knowledge about this important but largely unknown woman would be better off at the Interpretive Centers in Great Falls or Washburn at Fort Mandan.  I thinks it’s important to note that no Shoshone any longer live in Salmon, having been forced onto reservations hundreds of miles away about 150 years ago.

The party camped near Tower Rock.

The Lewis and Clark Expedition spent two weeks with the Shoshone from August 13 to August 31, 1805, bargaining for horses, locating a guide, and exploring  the Salmon River looking for a shortcut to the Columbia, even though the Shoshone had told them that navigating the river was impossible.  They were right, and so the Expedition spent a tortuous 10 days hacking their way north over a series of mountains until they finally reached what they referred to as Travelers Rest, and camped for several days to rest and provision themselves before turning west for what would be one of the toughest challenges of the expedition:  crossing the snow-covered Bitterroot Mountains as winter set in.

While their experience traveling from the Salmon River in Idaho to Travelers Rest in Montana was much worse than mine, my ride down from the top at Lost Trail Pass was awful.  “Road Construction Ahead” was my first sign (literally) that there could be a problem.  For nine grueling miles, highway crews were resurfacing the road with chip seal, something I hadn’t encountered since my Alaska trips in 2013 and 2016.  They had just put a fresh layer of fine gravel down, and the pilot car led us at 10 miles an hour for nearly an hour of dust, flying chips (rocks), and a very hot air-cooled Harley-Davidson.  When road conditions are good, that road is a great ride.  That was my final “bad” and I washed some down some of the dust with a 23 ounce Scottish Ale at the end of the ride.

Tomorrow I should have a beautiful ride over the Bitterroots, which almost ended the Expedition in 1805.