So what are the odds that two people from Haywood County, North Carolina, could bump into each other there?  Pretty huge, right?  But it happened.

As I walked out of the interpretive center at Pompey’s Pillar (more about that in a minute) I saw a familiar person heading to take a closer look at the rock.  It was Jim Pierce and his wife Linda.  Jim is one of my co-workers at Habitat for Humanity.   I knew he and Linda were headed for Alaska pulling a camper, and he knew I was headed for Oregon following the Lewis and Clark Trail, though no plans had been made to cross paths.  But we did.

Once we got over the shock of seeing each other in the middle of Montana , Jim and I climbed the 200 foot high rock (there were stairs) while Linda waited below out of the hot sun in the air conditioned visitor center.

Jim Pierce and I laugh as Linda documented our chance meeting with my camera so we could prove it really happened. 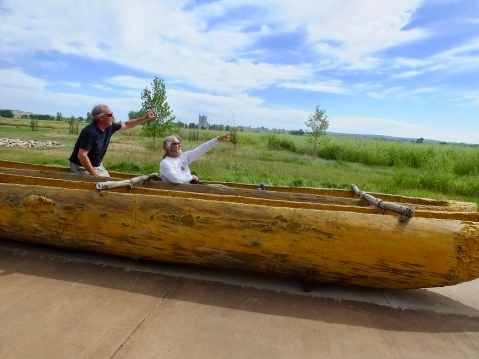 Jim and I strike our best Lewis and Clark poses in the replica canoes similar to what Clark would have used paddling down the Yellowstone river in 1806.

So, how did it happen that we met today?  I decided several months ago that I would take a detour today from following the 1804 route up the Missouri River and instead see part of the route taken by Clark on the 1806 return trip from the Pacific Coast after he and Lewis temporarily parted ways once they re-crossed the Rocky Mountains.  Lewis went north to try to locate the northernmost reaches of the Louisiana Territory, while Clark took several of the men and Sacagawea and her infant to look for and map the Yellowstone River.  Their plan was to meet again at the confluence of the Yellowstone and Missouri rivers in early August.

I wanted to cover as much of their travels as possible, and the Missouri River is largely a series of Lakes in northern Montana, so today I backtracked Clark’s route down the Yellowstone River, looking particularly for Pompey’s Pillar.  But I also decided yesterday that since I was so close to the site of the historic 1876 Battle at the Little Bighorn (which has nothing to do with Lewis and Clark) that I would add 100 miles and three hours to today’s ride for a brief visit to that well-known battlefield.

It was hot when I got to the National Park Service’s popular site on the Little Bighorn, so I watched a brief film in the crowded and stuffy visitor center, walked to the famous location where Custer and 41 of his men died on a small hill, then motored along a road that traces the course of that battle.  Every American over the age of 10 has probably heard of Custer’s Last Stand, but to visit the site and imagine the chaos that unfolded that day is to understand why we preserve such relics of the past.  An hour wasn’t enough time to truly appreciated those days in late June 1876, and I’d like to return when I have more time to study and understand all that happened.

The hill at the Battle of the Little Bighorn where Custer and his men fell.  The stones mark the location where the men fell, not where they are buried.  Throughout the site, there are similar stones where several hundred other soldiers died fighting the Sioux, Cheyenne and Arapaho who simply wanted to be left alone and free to roam and hunt on their ancestral lands.

After I left the battlefield, I headed back to the Yellowstone River, narrowly avoiding a GPS-chosen road that was gravel for 14 miles, and found the location of the Department of the Interior administered Pompey’s Pillar National Monument.  Which, of course, is where I had that Strange Encounter of the Habitat Kind that still boggles my easily boggled mind. 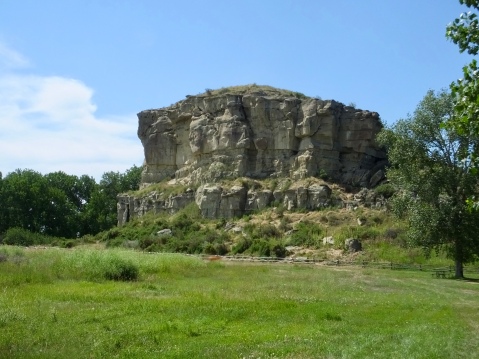 Pompey’s Pillar or Tower pretty much as Clark saw it in 1806.

Where was I?  Oh, yes.  Pompey’s Pillar.  On a rainy, windy July 25, 1806, Clark recorded in his journal that “at 4 P M arived at a remarkable rock Situated in an extensive bottom on the Stard. Side of the river & 250 paces from it.    this rock I ascended and from it’s top had a most extensive view in every direction. This rock which I shall Call Pompy’s Tower is 200 feet high and 400 paces in secumphrance and only axcessable on one Side which is from the N. E the other parts of it being a perpendicular Clift of lightish Coloured gritty rock on the top there is a tolerable Soil of about 5 or 6 feet thick Covered with Short grass. The Indians have made 2 piles of Stone on the top of this Tower. The nativs have ingraved on the face of this rock the figures of animals &c. near which I marked my name and the day of the month & year.”

And his carving on the rock is still visible, protected now by bullet-proof glass to prevent imbecilic vandals from defacing it.  Over the years hundreds of people have also carved their names in the rock, but it’s now protected by a camera and a staff person.

This signature on an odd rock named for the infant son of Sacagawea in the middle of Montana is the ONLY physical evidence to be seen along the trail to prove that Lewis and Clark were there.  Her son, by the way, was named Jean Baptiste Charbonneau, but Clark called him “Pomp” or “Pompey.”

Other than the field of soybeans in the foreground, this is pretty much the view of the land that Clark had looking west from the top of Pompey’s Pillar.  The earlier rains of July 25, 1806, must have cleared because Clark saw snow-covered Rocky Mountains to the southwest. “after Satisfying my Self Sufficiently in this delightfull prospect of the extensive Country around, and the emence herds of Buffalow, Elk and wolves in which it abounded, I decended and proceeded on a fiew miles

Tomorrow I’ll return north to continue to retrace the 1804 route, recrossing the Missouri and detouring once again, this time for a brief visit with a granddaughter.

Oh yes we did.