I should start this post by noting that the day turned out much better than I expected when I fired up the V-Twin this morning.  For months I had looked forward to a stop at the Lewis and Clark Interpretive Center and a re-creation of Fort Mandan in Washburn, N.D. When I looked at the state parks’ website for this facility this morning, it didn’t list operating hours.  So I called the phone number listed for the park and, as expected at 7:30 a.m., got a recorded message, which gave the operating hours as 9-5 Monday through Saturday.  Closed Sunday.  To say I wasn’t happy would be a gross understatement, but there wasn’t anything I could do either, so I scratched that visit and headed for the Knife River Villages National Park site 25 miles west Washburn that was  open today.  The route from Bismark took me past the Washburn Interpretive Center/Fort Mandan, so I pulled in the parking lot thinking I might get a picture of something on the outside.  To my great surprise and delight the center was open and is always open on Sundays.  The staff inside promised to work on fixing the website and phone recording.

The staff at the Interpretive Center also told me that a tour of the fort two miles down the road was about to start and I should go there first.  So back on the bike I climbed and roared off to the fort.

The Corps of Discovery landed near a large Mandan village in late October 1804 and there they would stay until spring.  The original plan had been to send the keelboat back to St. Louis before winter set in, but delays along the way convinced the captains to wait until the spring to split the party, with seven men returning to St. Louis and 30 continuing westward.  That meant building a fort with accommodations for all of them for the winter.  When completed, the fort was a triangular shape with two rows of huts with upper lofts forming two legs of a triangle and a log picket front with a gate forming the third.

Sergeant John Ordway also kept a journal and from his writings we can watch the progress of the fort building.  (Spelling is as in the original.)  November 2, 1804: laid the foundation of one line of our huts, which consisted of 4 Rooms 14 feet Square.    the other line will be the Same.  November 13, 1804: we unlaoded the boat for fear the Ice would take it off    we put the loading in the Store house, all though it was not finished, but we continued the work  November 17, 1804: the party all moved in to the huts  November 27, 1804: we finished dobbing & covering & compleating the remainder of our huts  December 1, 1804: we commenced bringing the pickets & preparing to picket in our Garrison  December 24, 1804: we finished Setting pickets & arected a blacksmiths Shop.

Nearly six weeks passed between the time the building started and the day the final pickets went up.  But in fairness to the members building this fort it should be pointed out that during this time two cold snaps lasting several days each dropped temperatures to minus 30 to minus 44 degrees. Work on the fort in those conditions would have resulted in several cases of frostbite or frozen fingers.

Melissa was the tour guide today and nine years on the job have given her tremendous knowledge about the fort and an appreciation for what it took to build and live in it.  She is standing in the middle of the triangular parade grounds.  Four “huts” would have been on each side and two additional storage rooms completed the rear of the structure.

The re-created fort represents the best efforts at historical accuracy, but since no one knows exactly what the fort looked like, historians have had to rely on a sketch and a couple of recorded measurements.  One of the things I enjoyed about this re-creation is that the rooms are furnished with tools, weapons, personal goods, clothing, furs and other items that are meant to be handled by visitors.  They’re all replica items, but it’s much more effective to hold a blunderbuss than to simply see it behind plexiglass.

The tour normally lasts for 30 minutes but Melissa was extremely forbearing and allowed me nearly an hour and a half during time which I peppered her with questions for which she always had a good answer.   Today, I was fortunate once again in finding an historic site staff member willing to go the extra mile. 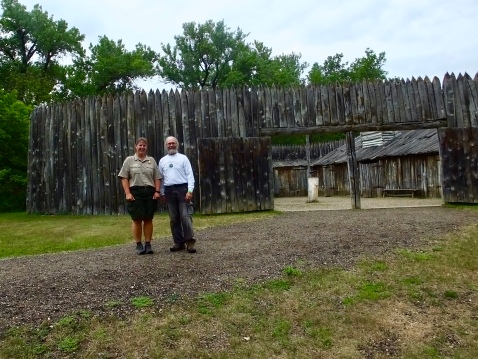 Melissa and I stand in front of the fort, showing the pickets, the gate and one row of huts. For years the site was funded and operated by a 501-C-3 organization.  Four years ago the state of North Dakota stepped up and added the site to their state park system.

Following the extended tour, I returned to the interpretive center for a much different tour.  The center has exhibits on several topics, including the 1804-1806 expedition and a room dedicated to Sakakawea/Sacagawea/Sacajawea.  The spelling, pronunciation and meaning of her name are still hotly debated; even her tribe of origin is not agreed upon.  Most, but not all, scholars believe she was a Shoshone captured by the Hidatsa, with whom she was living with her French-Canadian husband, Toussaint Charbonneau, when she and he were added to the expedition in the winter of 1805 at Fort Mandan.  The Interpretive Center was well done and often repeated and confirmed what I had read about the expedition preparing for this adventure.

What was new to me was the display on the impact of smallpox on the upper Missouri tribes from the 1770s through the 1830s.  Several different epidemics swept through the area periodically, often killing 40% to 50% of a tribe.  But the final and worst epidemic occurred 30 years after Lewis and Clark completed their voyage.  In 1837, a catastrophic epidemic killed off 90% of the remaining Mandan, who had never been vaccinated, and 50% of the remaining Hidatsa.  Those two tribes combined with a decimated Arikara tribe to form what is known today as the “Three Affiliated Tribes,” whose people largely live on a reservation in Central North Dakota.

I tried on a buffalo robe in the Interpretive Center.  It would have been warm, but quite heavy to walk around in during sub-zero weather on the Missouri River.

After finishing up at the Interpretive Center, I headed down the road to the Knife River Villages site run by the National Park Service.  This site preserve traces of three Hidatsa villages that would have been known to and visited by Lewis and Clark.  It was here that Sacagawea and Charbonneau left the group on the return trip in 1806.  All that remains above ground are circular depressions where earth lodges would have been erected.  Artifacts below ground, however, are still being discovered by archaeological digs such as the one I observed today.  The site also has a re=creation of a 50 foot diameter lodge that would have typically held 10-20 people, food stores, dogs and sometimes horses.

Circular depressions are evident on a walk across the prairie near the Missouri River.  The three villages would have held between 30 and 70 earth lodges with a total population of about 2,000 Hidatsa. 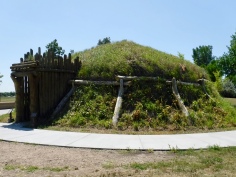 Undergraduate and graduate students do the dirty work of recovering artifacts that will likely be translated into a professor’s academic article.

Once the visit at the Hidatsa site concluded, I headed west across North Dakota to the eastern edge of Montana and another new time zone.  Most of my time riding through North Dakota saw relatively flat lands covered with corn, soy beans, and more corn.  But not all of North Dakota is flat as I discovered on a very windy ride through the northern edge of the North Dakota Bad Lands.  Strikingly beautiful and absolutely unsuited for farming, even the edge of the Bad Lands was worth stopping to take a picture.

A west wind was blowing at 25-30 mph with gusts near 40 mph when I went through here, and keeping the bike on the road kept me fully occupied.  It was the third windiest day I’ve ever ridden through.

One final note on this long blog.  After a shaky start to this trip, my bike seems to be holding up fine, though it’s nearly as dirty as it was on trips up and down the Alaska Highway.  Lewis collected hundreds of plant and animal specimens.  I have too but I don’t think mine are identifiable. Today the odometer rolled over 90,000 miles.  Not bad for an old bike with an old man piloting it. 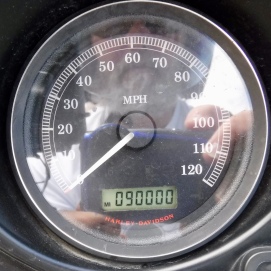 Tomorrow, something different, I think.