I was up this morning at 4:30 trying to post pictures to yesterday’s blog to no avail.  But tonight I posted them from my motel in New Hazleton, BC, on the Yellowhead Highway.

Many things changed today, including the temperature, which was a chilly 43 degrees when we started out and a balmy 81 degrees when we arrived with me sweating in long johns. Gas is now about 30% cheaper, even though it’s still expensive by U.S. standards.  Our menu choices for dinner last night included fried frozen chicken patties or hot dogs or hamburgers.  Tonight’s menu at Rob’s Restaurant (where I always eat when I’m in New Hazleton) included braised lamb shanks, Thai curry chicken and clams steamed in a light white-wine-butter sauce served over squid ink infused spaghetti.  At the grocery store here, bananas were $.79 a pound versus $1.89 a  pound last night.  And the quality of our motel rooms was comparable, but tonight’s bill is $40 less than last night.  Traveling through the wilderness is expensive. 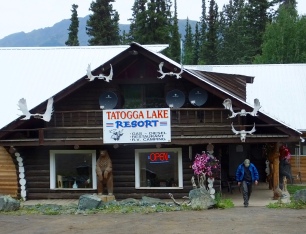 Breakfast options this morning in Dease Lake were almost non-existent since the town’s only restaurant closed last year.  The hotel clerk recommended we drive 50 miles south to the Tatogga Lake Resort where we could get a decent breakfast, so we did since that’s the way we were headed anyway.

There we met Tina, owner, gas pump attendant and chef.  She was fun to talk with and is one of those down-to-earth folks you enjoy meeting on the road.  She runs the place with the help of a friend who waits tables and her kids who can be counted on for various odd jobs.  And she cooks a monstrous three-egg ham-bacon-mushroom-pepper-tomato omelet with fresh fried potatoes on the side washed down with help-yourself hot coffee.

They claim to have the oldest operating restaurant on the Cassiar Highway and I don’t doubt it.  It’s in an old log building but with a modern kitchen and the dining area was filled with a variety of taxidermy specimens.  They also have cabins and campsites we didn’t see but another couple having breakfast expressed their satisfaction with their overnight accommodations. The Tatogga Lake Resort was a great stop and a good way to start the morning. 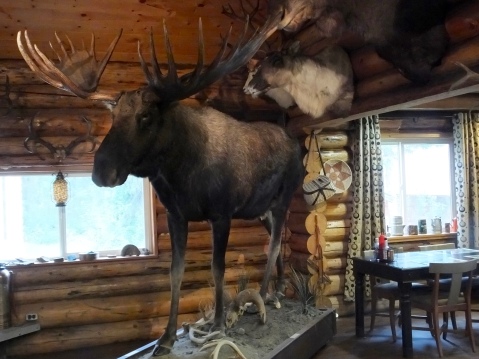 Immediately after leaving the resort, we bumped along through 35 miles of road construction. I think half the people in British Columbia and the Yukon are training for the Road Construction Olympics.  Fortunately, today’s construction trek wasn’t very dusty.  Unfortunately, that’s because it started to rain, turning choking dust into slippery mud.  Waiting for a pilot car at one of the active parts of the construction site, however, gave us a chance to listen to another character, this time Sandy the Flagger, decked out in her lime green coat and pants accented with a lovely orange vest and twirling a red and yellow STOP and SLOW sign.  Sandy expounded at length about what a great job she had because she was outdoors in the mountains and the boss of the road and only worked five months a year and then had seven months to go lay on a beach somewhere because beaches are sandy and she’s Sandy and see how well that works 0ut and Pensacola Beach was her plan for this winter but did we know anywhere else and maybe she would go to one of the Caribbean islands and here’s the pilot car gentlemen start your engines bye bye.

My tour of duty through the construction zone earned me another battle star in my windshield when an 18-wheeler roared by launching rocks at anything or anyone in range. I was in range. Now I have two fresh cracks in my previously pristine windshield.  I’m sure I’ll discover other surprises beneath the dirt and grime when I get home and wash the bike.

Other than interesting people along the way and the daily construction gauntlet, today’s ride was uneventful, except for a black bear on the roadside.  There was no shoulder on which to safely park the bikes, so we let him or her graze without the paparazzi interfering with breakfast.

Most of the time, today’s scenery would have been pretty special, but after two weeks of awesome in Alaska and the Yukon, today’s mountains, frequently hidden by untrimmed roadside growth weren’t all that special, so we mostly just rode  in silence, alone with our thoughts on the past four weeks and what awaits us at home. 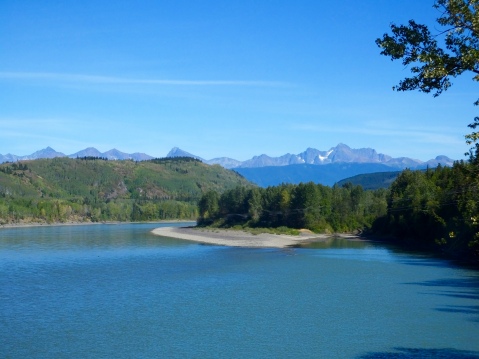 Today we went almost due south until we came to the Skeena River and the Yellowhead Highway.  Tomorrow our heading will take us east on the Yellowhead to McBride at the foot of the Northern Rockies.  Both directions take us closer to home, though we still have nine days left on the road with more things to see, people to meet and adventures to unfold.

Some readers have expressed grave concern over the lack of pie reports.  In truth, I’m not eating as much pie as I have in the past, though I still eat more in six weeks on the road than I do in 46 weeks when I’m not traveling.  Indeed, I was intent on ordering pie tonight at Robs but after Tina’s gigantic omelet and Rob’s generous portion of wonderful warm potato salad with chicken skewer and chicken vegetable soup and a very dark beer brewed in Okanagan, British Columbia, there was no room for pie.

The 4:30 effort to post pictures this morning failed to work but it did cost me an hour of sleep, which I’m going to make up for as soon as I post this.