Note: Aug 18  I’m able to post pictures from my motel in New Hazleton but I’m going to leave the snarky comments about Dease Lake up just because I can.  It’s my blog.

Note:  Internet service in Dease Lake is insufficient to post pictures.  I will try to add pictures in a day or two.  Please check back.

Up until today it seems like we’ve been dawdling, unconsciously trying to avoid returning to southern and warmer climes.  But no longer.  Yesterday, we crossed an Alaska border for the last time this trip, and today we left the Alaska Highway behind us as well as we dove southward on the Cassiar Highway (Highway 37) in British Columbia about 11 this morning.  All things Alaska are now in our rearview mirrors.

I thought we might have a travel delay issue on Highway 37 when I read a flashing highway sign warning of an active forest fire down the road and declaring that all motorists should not stop on the road.  I took their “no stopping” declaration as a challenge and looked forward to blatantly stopping  on the road to take some pictures. But, although the smoke from the fire was visible and irritating to nose and eyes, we saw no photogenic flames and were through all the smoke in about 10 minutes.  “Going to have to shoot something else for the blog,” I thought. 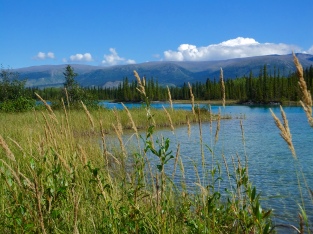 As we rolled south on the Cassiar, I spied a sign notifying us of an upcoming turnoff to Boya Provincial Park and remembered a conversation on yesterday’s ferry ride where Boya Provincial Park received high praise.  So I made the turn and we motored about a mile off the highway down to a small lake with about four dozen campsites.  Boya Provincial Park, operated by BC Parks, has a lake, rentable canoes and kayaks, hiking trails, a playground for kids, fishing, beautiful mountain views, and probably several other parky things we didn’t see.  The ferry passenger was right; it is a nice place to spend a day or two. (A beautiful picture of a lake and mountains would go here if I could post it.)

After talking with some campers at Boya and comparing Alaska fishing notes that revealed similar weather-related problems, we continued our two-wheel journey southward.  I’ve visited Jade City twice before on trips through the six-building burg and have two small pieces of Jade sitting on my Maggie Valley mantel to prove it, but I thought Mark might like to spend some of his money there as well, so we stopped.  (A mediocre picture of a saw cutting a chunk of Jade would have been inserted here if the *&$^%# Internet service was better).  We looked at the jade cutting setup next to the retail store and then went in and perused their rocky green wares.  Mark gamely resisted the lure of various carved jade bears, bisons, fish, jewelry and even polished hunks of jade with no discernible purpose and he emerged from the enterprise with all the money he entered with.  Still it was worth a few minutes stop because I scored a free cup of coffee.

(By the way, I haven’t stopped eating pie when it’s available; I’ve just stopped reporting on it.)

The Cassiar Highway resembles a quiet country lane because it’s narrow and has no lines delineating directional lanes or passing zones.  Except this forest-lined country road is 350 miles long and has large mountains looming over it and long blue lakes sloshing beside it which you can see when the trees and brush have been trimmed which is almost never.  There are few cars and fewer trucks on this road , making it far preferable to me than the over-travelled Alaska Highway.  If one travels south through the valley, the northern Rocky Mountains rise on one’s left while the Cassiar Mountains of the British Columbia Interior Mountain Range appear on one’s right.  These are two separate ranges, according to professional geographers and geologists, but are highly pleasing to look at even if you’re just old motorcycle riders.

At one point as we passed a large lake on our left between the road and rising Rockies, we simultaneously spied a big brown object moving in the water.  “Moose” I yelled into the CB radio and made a quick stop at a convenient gravelly pull out.  Closer examination of the ungulate revealed no rack, but the cow, 500 yards or more away from us, was splashing her way across a grass bed in the water, nibbling selectively as she went through the water.  Two beautiful white swans kept her company while a bald eagle circled lazily overhead, no doubt keeping an eagle eye on all activity below.  We stayed for awhile, and with my lens extended to its full 1000 mm range and sitting solidly on a small tripod, I took pictures for about 15 minutes.  The meandering moose waded and swam to the far side of the lake, the swan pair noisily beat the water with their wings and took flight and the eagle soared soundlessly down the valley and out of sight.  (Several pretty good shots of the moose and the swans from nearly a half mile away should be here but aren’t because the motel’s lousy internet service can’t handle a couple of crummy pictures.)  I removed the camera from the tripod, stored my photo equipment back on the bike and we returned to the road.

Click on any picture below to see larger views of all of them. 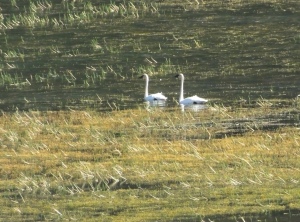 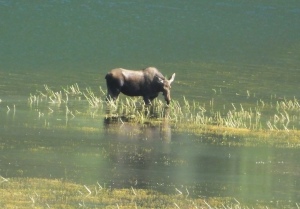 One final note:  We had been warned yesterday by a fellow traveller that the final 20 miles or so of today’s ride would be through a dusty construction zone.  It was.  And it was probably the dustiest we’ve been through on this trip.  Nary a water truck in sight to sprinkle anti-dust liquid on the road.  Following a pilot truck or being passed by dust-belching vehicles going north meant a lung-full of powdery road dust and, at times, visibility limited to a couple dozen feet.  When we got to our expensive hotel with crappy internet (it’s the only game in town and it’s sold out), I probably permanently soiled  a fresh white washcloth just washing off my eyeballs.  All part of the Adventure, I guess.

Tomorrow we continue down the Cassiar Highway to the Yellowhead Highway where I don’t expect the Internet signal to increase much at our next stop.  But I’ll keep trying to post pictures.