Note:  This will likely be the last post until Sunday night.  For the next two nights I’ll be at a Wyoming ranch that has no Internet service.  I’ll write both days I’m there and post Friday, Saturday and Sunday blogs at the same time.

Getting an early start this morning from Cody paid off as I raced up the Chief Joseph Scenic Byway largely unimpeded by traffic.  The Beartooth Highway also had much less traffic than yesterday, at least until I turned around near Red Bank to retrace yesterday’s route.  Going east on the Beartooth without stopping to sight see and take pictures and at a pace considerably quicker than yesterday, I ran the 43 miles in a little under an hour.  That sounds slow until  you count the number of curves marked 20 mph; they usually slowed me down to 30 mph.  There was some traffic going my direction, but they either realized I was faster than they were and pulled over or I went around them.  Reversing direction and retracing the eastward run, there was more traffic because all the bikers who stayed in Red Lodge were getting on the road.  Many of them were sightseers and pulled off to take a look at the scenery or they got passed.  I wasn’t too aggressive but did make about a half dozen double yellow line passes. I made the two-way run today faster than I made the one-direction run yesterday.  Yeah, it was fun and the adreniline rush made up for the missed second cup of coffee this morning.

Once I returned to the part of the road I hadn’t traveled, I slowed down to sightseeing speed.  One of the results of that was that I spotted a doe on a hillside and was able to stop, walk back, and get a shot.  As you can see, I got her right between the trees.  The rest of the ride through Cooke City and to Yellowstone National Park was uneventful.  Then I encountered my first traffic jam. 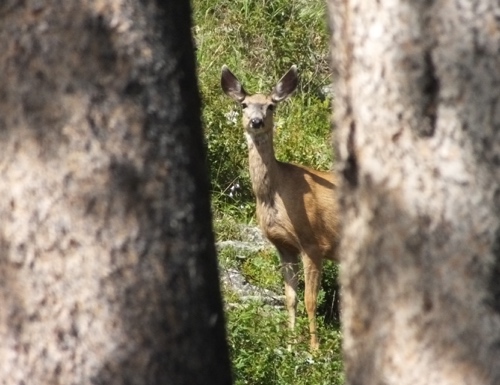 Approaching the Park east entrance, traffic had come to a dead stop.  Wreck?  Bear?  Bison?  Nope.  Toll booth.  Traffic was backed up for more than half a mile and I waited in line for about 45 minutes before I finally got into the Park.  There was only one toll booth open  and there were a lot of unhappy people in that line.  And, of course, once inside the park, there were additional traffic backups every time a bison was near the road, or there was a waterfall to see.  Yellowstone has some of the most fascinating and beautiful sights and scenery and animals of any park anywhere, but the number of people and cars is killing the place.  I seriously think they should consider the same approach they’ve taken at Denali in Alaska.  The only way to get into and see Denali is on buses.  Cars are left in a parking lot.  It seems to me buses at Yellowstone could be like shuttles.  You wouldn’t have to stay on the same bus all the time.  Just a thought.  But I think they’re going to have to do something.  Raising the fees to $30 per car/$25 per motorcycle didn’t seem to have any effect.  (I got in free because I have a $10 lifetime senior pass.) 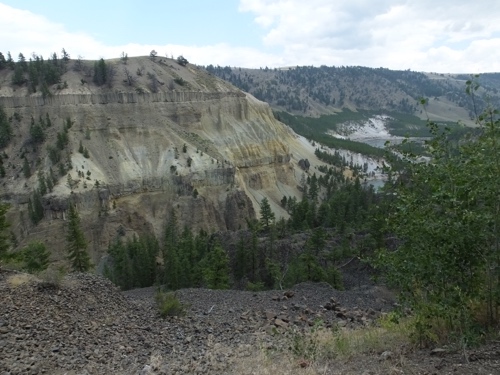 I had hoped to see the tremendous Tetons in all their glory today, but once again a haze obscured the view.  I could see shapes that I knew were mountains but the snowy, rocky details were left to the imagination.  I’m pretty sure the problem continues to be smoke from wildfires.  The haze isn’t bad enough to cause any breathing problems, even for people with compromised lungs.  But it sure does spoil the view.  The Tetons ares so spectacular because they’re young and haven’t had time to get rounded off by weathering and erosion.  In fact, they’re still growing.  While the rest of the Rockies are 50-70 million years old, the Tetons are only about 9 million years old and still considered part of the Rockies.

I’ll keep writing even though I may not post until Sunday.  Looking forward to time on the Croonberg Ranch with friend Linda.

More pictures from today I liked: