One of the high points of any trip I take out west is a stop at Linda’s ranch outside Laramie.  For those who don’t know, Linda is a friend from our Wyoming days in the 1980s and a unique person Marilyn and I admire and enjoy very much.  Linda runs an 8,000 acre ranch by herself and I’m convinced can do any job a ranch requires.

The trip to Laramie from Dubois was a trip back through time as I rode on highways that I got to know pretty well in the four years I spent in Wyoming from 1986-1990.  Crowheart, Ethete, Lander, Jeffrey City, Rawlins, Elk Mountain–these were all recognizable names and scenery and not much has changed.  The land seems empty except for the occasional isolated ranch and the ubiquitous historical markers reminding today’s travelers that this was the land of pioneers and covered wagons and Indian wars.  The area I went though today was traveled by hundreds of thousands of pioneers in covered wagons headed west because these high plains (6,600) feet were the best pass through the Rockies.

I took time to take a few photographs of the multi-colored landscape, the Wind River, Split Rock (an easily seen landmark for native Americans and westward travelers), some antelope and a hawk.  The hawk shot was made a little more difficult by a ranch dog who came to meet me in a rather unfriendly manner but who finally decided I wasn’t a threat to whatever it was he was protecting.  I’m also learning that hawks are hard to photograph.  The first two times I tried to shoot a hawk today, they flew off before I could even get my camera out of the tour pack.

I arrived at the ranch a little after 4 p.m. and Linda and her friend Brad had stopped work for the day and were going to look at a welder but postponed that chore until tomorrow morning.  She showed me some of the changes that have been made since the last time I was here (two years ago):  New equipment shed, new hay shed, and a new bunkhouse (an RV).  She never stops working at the ranch.  A couple beers, a little wine, some Jack, great grilled ribs and plenty of new Linda stories occupied the remainder of the evening.

I thought my 10,000 mile Great Rocky Mountain Adventure was an adventure until Linda begins relating stories about her daily life on the ranch.  A mountain lion scarred her heavy duty RAM truck with scratches on the hood, the window and the top of the cab.  A moose camped out in her yard for a day and then charged her in her own front yard as she was heading for the barn.  Not one, not two but three mountain lions set up shop in her hay barn and strolled through her yard like they owned it.  150 elk trampled her pasture and she had to run them off.  But the best part of all these adventures is hearing her tell it in her own Linda way.  I really think she could make a living touring and telling  hilarious stories of life on the ranch.

As I sit writing, the Little Laramie River gurgles peacefully outside my window, the last light is fading in the west, and everyone is going to bed early because the sun comes up early at the ranch and that’s when work begins.

Who knows what tomorrow will bring, but on the ranch it’s going to be interesting.  Of that I’m sure.

Other pictures I liked from today: 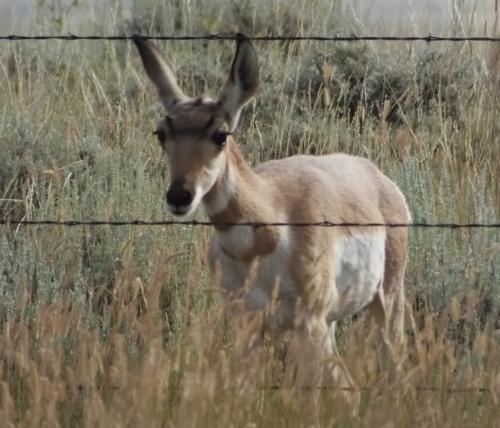 One response to “GRMA Day 32: At Linda’s Ranch”