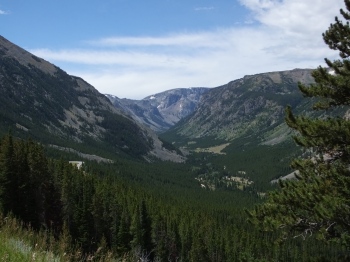 The Beartooth Highway between Red Lodge, Montana, and Yellowstone National Park has a reputation as a great motorcycle road.  The reputation is well-deserved.  After riding on I-90 for two boring hours following my departure from Bozeman, then cruising along an average high plains highway with cows and sagebush, I came to Red Lodge and discovered that half the bikers who had gone to the Sturgis Motorcycle Rally had come to Red Lodge for lunch.  OK, so I exaggerate.  But there were still a thousand bikers or more in Red Lodge who had either come from or were going to Sturgis.  And, like me, they had come to Red Lodge to ride the Beartooth Highway.

Lunch at the Red Lodge Cafe took a while because the eatery was short-staffed, as the “Help Wanted” sign in the window suggested.  But I had time, so I waited patiently.   A guy with a group of 15 Australian riders found seats for all 15, but not one for himself, so I offered him a seat at my table.  Turns out Brian was their “guide,” a retired California fire fighter who picks up a couple guiding gigs a year to make a little extra cash and ride a motorcycle at the same time.  Sounds like a good idea to me.  He gave me one of the comapny’s business cards and I may contact the owner to see what’s up with guiding.

Lunch over, I proceeded to the main business of the day:  The Beartooth Highway.  Imagine a very tall modern rollercoaster that keeps going up and up and up.  And up.  And then it turns you loose into screaming downhill corkscrews and loops and g-force curves that leave you with butt-cheek clench cramps.  Yeah, that pretty much sums up the Beartooth Highway.  Oh, and throw in some absolutely breathtaking scenery so beautiful that it’s hard to take yours eyes off even though you know you should be focused on the yellow and white lines that define your very narrow margin of safety.  And just for kicks, add some 25 mph winds at the top of the coaster with gusts that move a fully loaded 900 pound motorcycle back and forth across the road.  Today’s ride was so much fun I’m going to ride the coaster again tomorrow, even though it will add about 80 miles to my riding day.  Maybe if I get to the Beartooth early enough the blurry-eyed Sturgis gang will still be nursing hangovers and won’t be on the road.

In addition to the Beartooth Highway, I also rode the Chief Joseph Scenic Byway from the Beartooth into Cody, Wyoming, where I’m spending the night.  The Chief Joseph Highway (named after the Nez Perce chief who led the failed attempt to escape from the U.S. Cavalry in 1877) lacked the 11,000 foot drama and scenery I had just experienced, but it too was a great ride with some floorboard scraping twisties and views that certainly qualify it as a “Scenic Byway.”  The good news is that to get back to the Beartooth tomorrow morning, I have to make a return visit to the Chief Joseph as well.

Tomorrow’s ride will be different, though, because I plan to ride it just for the ride.  They’ll be no stopping to take pictures this time.  After I’ve re-ridden both of those great roads, I’ll go through Yellowstone National Park, which has some pretty amazing scenery of its own.  The scenery there is easier to see because traffic usually crawls along at a “look-at-all-the-buffalo-get-a-picher-Mildred” pace led by a man wearing plaid shorts and black socks and driving a rented RV oblivious to the 25 cars backed up behind him.  I guess after running the Chief Joseph and the Beartooth, I may not mind catching my breath at a little slower pace.

Not much in the way of critters to take pictures of today, other than the always ferocious attacking ground squirrel (grizzlius chipmunkus). The one I took a picture of was clearly about to pounce and take me down but, recognizing his malevolent intent, I deftly avoided his deadly assault. I think I know why he singled me out:   I carry a little bag of salted peanuts to munch on when I’m on the road and it was clear that he had his beady eyes on my nut sack.

Tomorrow will take me to the iconic Tetons and to Dubois, a nice little town I remember from my years in Wyoming.