I’m not a very happy Adventurer right now.  I  spent an hour writing this post already and when I tried to publish it, it disappeared into the cyber netherworld.  Don’t know if it’s the Internet connection, the blog program, or the iPad, but I’ll try again.  Writing something a second time never seems to produce the same results.  Damn.

NOTE:  Pictures will not enlarge.

Rain overnight had ended by the time I left the Ripley Creek Inn a little before 7 this morning, but the sky was gray and low hanging clouds covered the surrounding mountains.  It would stay that way all day:  cool and damp but not cold and rainy.  A decent enough day to go bear hunting.

When I crossed the Canada/US border and headed toward the Fish Creek observation area, I had great anticipation for what lay in store.  So did the other half dozen bear hunters who arrived at the site before I did.  The number of observers continued to grow throughout the day and by the time I left this evening at 6:15, more than 50 had gathered in hopes of spotting bears. 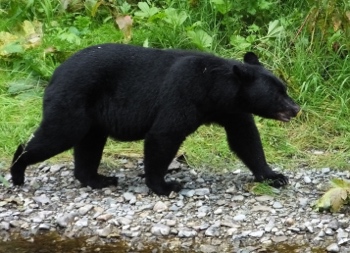 Today’s hunt was semi-successful.  I watched a half dozen black bears come, catch fish, and go; saw soaring bald eagles frequently fly over the creek looking for a fishy meal, and, equally as important, became acquainted with a handful of Canadians who continued to enhance my warm feelings for the people who live in this country.

The best bear encounter all day was a large black, probably male, that stayed around for about 15 minutes while he looked for salmon, crossed the creek a couple of times, ate berries in the bushes nearby and then slowly ambled off into the thick undergrowth to take a Sunday afternoon nap.  Normally, the black bears don’t stay around long because the grizzlies who frequent the same aquatic buffet don’t like to share their food or the space with the black bears and will rough them up if they discover them shopping for salmon at the local fish market.  The size of the black that hung around–probably more than 300 pounds made him a little less concerned about the grizzlies.  Or maybe he knew what we didn’t:  The griz were taking Sunday off.  At any rate, it was fun to watch him doing bear things for a quarter of an hour.

In addition, an immature bald eagle (probably about three years old) flew up and down the creek several times before landing and feasting on the carcasses of salmon bears had cavalierly discarded the day before.  Sometimes a bear will eat all of a fish, but other times he’ll take only the parts he wants and leave the rest.  The juvenile–recognized by his non-white head–spent a leisurely 10-15 minutes eating, drinking from the river and thinking about going after a swimming salmon before giving up the notion for the free lunch that lay around him.  At any rate, he kept the cameras clicking for as long as he was on the ground and the few seconds he was in the air and still visible. 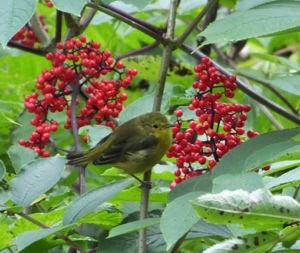 But maybe the best part of the day was spending time with newfound Canadian friends, talking about who we are, what we do, where we’re from and where we’re going.  One of our group that hung together when there was no wildlife activity was an excellent amateur wildlife photographer who plied his avocation with a $6,000 Nikon camera and a $4,000 lens that probably wouldn’t fit on my motorcycle. Gary, who was a retired Victoria fire fighter and current employee of a mining company, shared his substantial photography skills with several of us who are still challenged when it comes to the finer points of modern cameras.  His advice will no doubt make me a better photographer as I look for images to break up the text on these blog pages.  Two women friends were on a three-week quest to photograph BC wildlife in their rented Jeep and, like me, they were frustrated at not seeing a grizzly today to round out their extensive list of sightings and shootings over the past two weeks.  And an Alberta couple learned new photography tricks and, after conversations with some of us who have traveled in this area altered their itinerary to take in recommended routes.

Canada/Yukon/Alaska is a vast territory, but in some ways its like a small town with very long streets.  Because there are so few roads to travel and towns to visit, everyone, it seems, has been to the same places, hotels, and restaurants, or will be going there soon.  “Have you been to the bakery at Haines Junction?”  “Oh yeah.  Best cinnamon rolls on the road.”  Or “When you get to the Northway Inn don’t expect much, but the owners are very nice.  And get gas the night before because when the station opens its two pumps at 7 in the morning there will already be a line of RVs and trucks.”

When I get “on the road again” tomorrow, there’s a chance I’ll see some bears along the way, according to folks who traveled the same roads in the past few days.  I’ll try to stop without irritating the bears and get a few more pictures, especially if the forest wayfarers are of the grizzly variety.

I’ll try to add pictures to this tonight if I can.  If not, I’ll put them up when I find a suitable Internet connection.

Watch out for bears.  I know they’re out there somewhere.

More pictures I liked from today: