Happy Fourth of July! (Though by the time anyone reads this it will be July 5.)  This is the second time Marilyn and I spent Independence Day riding in mountains out west, the previous time being four years ago when we had a snowball fight on the Fourth of July in Glacier National Park on Going to the Sun Highway.  That was before Marilyn had taken up riding and was enjoying the sights from the passenger seat behind me. 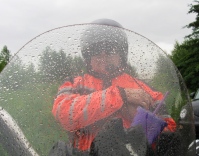 Marilyn readies for the foul-weather gauntlet.

Anchorage’s send-off this morning was fitting, given the weather conditions we had on the Kenai Peninsula for five days. A light rain and 50 degree temperatures as I packed the bikes meant a chilly start to the ride, but I took heart from the weather.com website which assured me that as we rode east toward Tok near the Canadian border the weather would improve and that the recently elusive blue skies were even possible.  But for the first 50 miles or so we rode in the drizzle and dodged the occasional errant moose who thought crossing a six-lane road was a good idea.  Not even a close call for us, but we were reminded later in the day talking to other bikers that three road brothers died in Alaska in the last week in collisions with ungainly ungulates.  You’ve got to be careful out here.

Once we left the Anchorage environs and turned east, the Glenn Highway quickly began to live up to its National Scenic Byway designation.  Once again we were surrounded on all sides by mountains, and several of today’s massifs topped 13,000 feet and were completely covered in snow (when they weren’t covered in clouds).  Absolutely gorgeous riding, especially after the rain stopped.  The temperatures stayed in the 50s most of the day, but as long as it was dry and the clouds were lifting I was a happy biker.

Hard to see, but that’s the Mantanuska Glacier behind me.

Today’s ride not only included majestic views of the Chugach Range, the Talkeetna Range, the Wrangall Range and the Alaska Range (depending on which direction you were looking) but also commanding looks at two immense glaciers, the Mantanuska Glacier first, followed by the Nelchina Glacier as we headed east.  Both, of course, are receding but they are still huge and very impressive.  One of my next trips to Alaska is going to find me ON a glacier, not just looking at them from a distance.  (I thought going to Alaska on a motorcycle would make my bucket list smaller.  The list has actually grown several fold since I discovered what I was missing in Alaska.  I’ve got so much to do.)

Back to the Glenn Highway.  This road is made for motorcycles (except for the pesky moose).  You can ride at a leisurely pace and enjoy some of the most beautiful scenery in America, or you can open the the throttle, lean into sweepers, rock and roll on the twisties and get the adrenaline coursing through an aging body.  Either way, it’s a ride you’ll remember.  Today’s ride was a little more 330 miles and 300 of that was on the Glenn Highway and the Tok Cutoff extension.  The latter half had some flatter parts as we neared the Tok terminus but even that was interesting as we rode through a narrow green canyon of towering spruce trees.

Eureka Lodge has been hosting guests since 1936.

We stopped for lunch (well, OK, I stopped for pie and Marilyn stopped for lunch) at the Eureka Resort/Lodge, which has the distinction of being the oldest roadhouse on the Glenn Highway.  Initially built as a very small cabin (preserved on the site), it’s gone through several iterations in the 1940s, 1960s and 1970s.  One of the buildings burned and the others were outpaced by the popularity of the place.  The current ediface, while not fancy, is solid and serves good home-made banana cream pie, along with about eight other varieties I didn’t have time to try.  Some years back, I’m guessing the 1960s, they sold coffee for $.25 a cup and they still do.  It’s a great stop on a great road.

When I was looking at the original cabin, which I believe is in the original location, I turned around and saw why the first owners set up shop there.  What a view of the Nelchina Glacier!  And it had to have been much better 75 years ago.  Hiking, snowmobiling and flying trips to the glacier are still hugely popular, as are the homemade pies.

What a view of the Nelchina Glacier from the front door of the roadhouse.

Even though we’re at Tok and still in Alaska and we won’t cross into Canada until about noon tomorrow, today really seemed like my last day in Alaska.  As the miles to today’s destination grew smaller, my speed declined as well.  I wanted to stretch my final Alaska ride (of this trip) as long as I could.  So I relaxed my grip on the throttle, let it fall to an embarrassing 10 mph below the speed limit and just enjoyed the final run as the sky changed from cloudy to blue and the temperatures warmed to the low 60s.  I knew Alaska had good weather somewhere.

Tomorrow we have a short ride back to Buckshot Betty’s and then nine more days touring the wilds of the Yukon and the mountains of British Columbia, before diving back into the USA at a Montana border crossing.