First, my apologies for last night’s post.  After about 10 hours of sleep, I woke this morning feeling about 95% better.  I still don’t know what brought me down yesterday, but it was a real butt-kicker.  Hated to give up even a single day on the Kenai to the quirks of human frailty.  Oh well, I didn’t miss anything that I can’t do when I come back.

The five days we were on the peninsula, the weather was at least consistent:  Overcast, chilly temperatures in the 40s and 50s, and the occasional light rain.  Today, at least, we avoided any rain, but stayed suited up the entire day just in case.  I’m not complaining about the weather, even if sometimes I wished it was sunnier and warmer.  I think Marilyn and I got a pretty good taste of what summer is like in the south-central part of the state, and the weather didn’t keep us from doing any of the things we had planned to do.

The clouds, the mountains, the trees: The Kenai

After the obligatory stop to pick up a Harley-Davidson T-shirt to prove to any doubters that I actually was in Alaska, our ride today backtracked along the Sterling Highway that we took to Soldotna.  The Sterling Highway is a beautiful ride along several lakes and the Kenai River.  And as always, the ever-present mountains kept us company all day as we rode through valleys carved by various rivers.  I knew Alaska had mountains–lots of mountains.  But until I rode in the state, I didn’t fully realize how mountainous it is.  From the time we entered Alaska on the Alaska Highway we have never been out of sight of mountains, though at times they might have been 30 or 40 miles distant.  I expect tomorrow’s final ride in Alaska to be more of the same.  I hope. 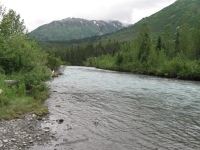 The Trail River below Summit Lake along the Seward Highway.

Because most of the roads follow river valleys, the slopes on the roads are fairly gentle and the twists and turns are not terribly challenging on a motorcycle.  But the views.  The views are spectacular, mile after mile, crag after crag.  Rocky slopes, snow-covered slopes, forested slopes, grassy slopes.  I’m not sure I would ever tire of it.  If Alaska only had summers all year long I might move here.  But I’ve heard too many stories in my short time here about winter months with temperatures below -20, dipping to the mind-numbing -60 and -70 below zero on really cold days.  Ah, but the summers.  The summers.

Since we had decided not to go through the Whittier tunnel this trip and we had already explored Hope with the help of octogenarian Bill Miller, about the only other main stopping point on the road back to Anchorage was Girdwood, home of the Aleyeska Resort and the Crow Creek gold mine.  I thought the gold mine would be an interesting diversion, but when we ran out of pavement three miles before the mine site, we turned around.  Road construction gives us all the gravel we need, thank you very much.

Marilyn thinks: “And I’m staying at the Anchorage Microtel????”

After stopping for lunch in Girdwood at the Silvertip Grill, a biker bar with a friendly owner and a less than friendly pit bull pooping on the patio, and filling up on a cheese-covered three-egg reindeer sausage-mushroom-tomato omelet,  we headed for Alaska’s biggest ski resort: The Aleyeska.  After doing 30-second tours of dozens of little towns where the newest building was the 1970s era post office, I was disconcerted to discover a four-star resort 30 miles from Anchorage.  A ski area I expected.  (Snow + mountains = ski area).  But not an over-the-top resort at home in Aspen or Vail.

We took a few minutes to wander around the grounds and the building, amazed at the semi-rugged opulence found in the Alaskan wilderness.  We decided if we hadn’t spent all our retirement money and our children’s inheritance on this two-month Great Alaska Adventure, we could have flown here for a week and stayed in the cheap suites.  But Marilyn doesn’t ski and won’t ride the tram and my old bones would probably snap the first time I renewed a sport I gave up 30 years ago, so a week at the Alyeska is not in the cards for these old motorcycle riders.

Riding toward Anchorage along Turnagain Arm that separates the Kenai Peninsula from the Alaska mainland was exhilarating because of the views, but a little melancholic because I knew our time there had been too short.  A month on the Kenai might be enough time to be satiated with it’s phenomenal forests, glassy glaciers and abundant animals.  Maybe.  But it might take two.  Or three.   The five-day taste of the Kenai has obviously whetted my appetite for a much larger feast.

Tomorrow, we ride east on the Glenn Highway to Tok, our last stop in Alaska before a ten-day jaunt through the Yukon and British Columbia.