The Alaska portion of the Great Alaska Adventure is over ten days after it began.  We  now begin  the journey home with   memories sufficient to bore our friends and family for years to come.  “Did I tell you about the time I went to Alaska and saw . . . .”   That opening phrase will be like a starter’s pistol, sending listeners speeding away from the Great Alaska Adventurers like snowshoe hares running from golden eagles. 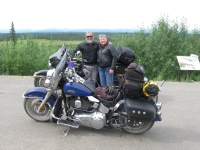 For those of you following the blog, I appreciate the opportunity every night to record scenes that will no doubt grow in grandeur over time and adventures that will become more perilous with every telling as the years pass.  But, believe me, it has been a Great Adventure for these two old motorcycle riders and will be enough adventure to last one of them a lifetime.  The other, of course, still craves more adventures and will return, I think, to the wild north seeking more exciting exploits and new riding opportunities. 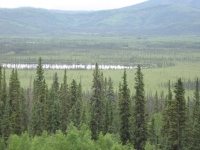 This is a very small part of the Tetlin National Wildlife Reserve.

Today, as has been the case for most of the last three weeks, we rode in and beside mountains most of the short, 110 mile ride.  We took advantage of the short ride to stop at the Tetlin National Wildlife Refuge Visitor Center for an hour or so to survey the expansive countryside and learn more about the people, animals and land of Alaska.  Tetlin is one of 15 NWR in Alaska and, while not the biggest, is certainly an important one to millions of migrating birds and land animals such as caribou.  It’s part of a major flyway that birds from six different continents use to move from one part of the globe to another, including tens of thousands of trumpeter swans that were nearly killed off by hunters 70-80 years ago.

The goal of the NWR is to study and protect crucial habitat buffeted by human and natural forces.  The exhibits were good (amazing what you can do with adequate amounts of money) and the information was current.  One of the problems faced by the Tetlin NWR is the same faced by all the others:  climate change.  Average recorded temperatures at Tetlin have increased more than six degrees Fahrenheit since 1950 and that change is having a deleterious impact on a large number of species, including one species of bird whose numbers have been reduced by 90% in recent years.

I didn’t start writing this tonight to get off on global warming, but it seems like everywhere I ride–especially out west–I see its impact.

Marilyn and I enjoyed our last few hours in Alaska, cruising slowly down the highway looking at the distant mountains, nearby lakes, ponds and rivers, and millions of spruce, cottonwood, and birch trees.

About 10 miles from the border with Canada, we were given a rude reminder of the dangers of riding in Alaska as we came on an unexpected 4 inch frost heave at about 45 miles an hour.  It rattled me and stood me up on the bike, but as I watched my rearview mirror I saw Marilyn bounce completely off her seat, despite the nanosecond warning I gave her over the CB. But a firm grip (inspired by a fear of flying) on the handlebars kept her and the Deluxe operating as a single forward-moving traveling unit.  She told me later that her purple drinking cup (the one that sent me on the best ride of the Alaska Adventure) ended up in her lap but she managed to recover it and return it to its chrome home on her handlebars.  We had just had a bathroom break or we would have had to stop and change our trousers.  We slowed a little after the close encounter of the frost-heave kind.

We also got a taste again of what is in store for us the next few days as we navigate east and south on the Canadian portion of the Alaska Highway.  Almost immediately after leaving the land of Red, White and Blue and entering Maple Leaf country the road turned to crap, some of it caused by the ravages of winter and some it caused by construction crews’ efforts to repair those ravages.  For one five mile stretch we were led by a pilot car at about 10 miles an hour through a stretch where the road had been removed.  We could see efforts to replace the missing road but it was little comfort as we bounced along on a rutted, muddy, one-lane track and watched the occasional earthmover move earth with no apparent engineering plan.  We finally cleared the worst of it and returned to the normally crappy road.  Oh well, at 40 mph there’s a greater opportunity to initiate moose-avoidance procedures should the need arise.

We’re back at Buckshot Betty’s for the night.  Today’s pie for me was pizza pie, and pretty good, too, for the Yukon wilderness.  At dinner we learned more about “Buckshot Betty” and how she got this name, which had something to do with a cinnamon roll and a bear.  Her exploits have been chronicled by Whitehorse singer/songwriter Barbara Chamberlin in “The Ballad of Buckshot Betty.”  Her real name is Carmen and she’s a character.  Would love to knock back some Jack with this lady.

Tomorrow we head for Whitehorse, YT, and will spend an extra day there sight seeing and recharging our batteries.