MHT Day 25: In the Land of the Nez Perce

On May 1, the expedition, guided by several Indians of different tribes, left their remaining canoes, the Walla Wallas, the Yakimas, and other Columbia River tribes behind and headed east on foot with pack horses.  Their land route to the Snake and Clearwater rivers, which they had canoed down five months ago, was about 80 miles along creeks and rough and rocky grasslands and took four days to complete.  From there, the route to the foot of the Bitterroot Mountains was only another 125 miles.  So why did they delay starting over those mountains until June 15?  What kept them in the land of the Nez Perce for five long weeks?

Snow.  They had left Fort Clatsop early.   They had moved as quickly as they could up the Columbia.  But they could not hurry the snow melt in the Bitterroots.  They knew they had to wait and the Nez Perce confirmed it.  On May 7, Clark recorded in his journal that

the Indians inform us that the snow is yet so deep on the mountains that we shall not be able to pass them untill the next full moon or about the first of June; others set the time at still a more distant period.    this unwelcom inteligence to men confined to a diet of horsebeef and roots, and who are as anxious as we are to return to the fat plains of the Missouri and thence to our native homes

The winter of 1805-1806 had been a hard one for the Nez Perce.  When the Corp traveled across western Washington in early May, they marched through blowing snow and sleet and slept in the cold without tents.  The salmon had not started their spring run up the Snake and Clearwater rivers, and the Nez Perce were still eating roots and tree bark to get by until the rivers filled with fish.

The first order of business when Lewis and Clark reached Nez Perce lands in Idaho was to reclaim the horses left in the Indian’s care in 1805.  Although there were difficulties involved with that effort, ultimately they added the horses left behind to the horses they brought from the Columbia for a total of 50-60 usable animals. Those that weren’t usable were often eaten because the few deer available coudn’t feed the 33-member expedition.

During the month they spent at Camp Choppunish (about 1 1/2 miles from where I am tonight in Kamiah), they traded with the Nez Perce for necessary and useful goods.  Clark used his skills and the limited medical supplies they had to treat various Indian ailments.  It’s unlikely his skills or his medicine actually cured much, but in a placebo sort of way, the Indians believed it did and many of their conditions improved.

From May 10 to May 13, 1806, the expedition camped near where I am now in Kamiah, Idaho.  On May 14 they crossed to the east side of the Clearwater River, about 1 1/2 miles upstream from here, where they stayed until June 10.  Their stay at Camp Choppunish (their name for the Nez Perce) was longer than at any other spot except Fort Mandan and Fort Clatsop.   During that time, the captains learned more about the Nez Perce and worked to advance the diplomacy necessary to incorporate them into the unfolding Indian policy of the United States.

But the men of the Corps were anxious to go home.  On June 14, having moved their camp to Weippe (pronounced wee  ipe) Prairie, where they first emerged from the mountains, famished and haggard the preceding September, Lewis wrote

we have now been detained near five weeks in consequence of the snows; a serious loss of time at this delightfull season for traveling. I am still apprehensive that the snow and the want of food for our horses will prove a serious imbarrassment to us as at least four days journey of our rout in these mountains lies over hights and along a ledge of mountains never intirely destitute of snow.    every body seems anxious to be in motion, convinced that we have not now any time to delay if the calculation is to reach the United States this season; this I am detirmined to accomplish if within the compass of human power.

And so, on June 15, 1806, they headed back into the looming, snow-covered Bitterroots.

Much of my time today was spent riding.  I stopped at the most significant sites in this area a little more than a week ago, and what I wanted today was to see the geography, to ride the hills and valleys they walked through or camped near.  I’m not sure they would recognize the land were they to be magically transported to 2019.  Where they saw rough and rocky grasslands and semi-arid desert, today I saw farms, wheat fields and giant wind turbines. 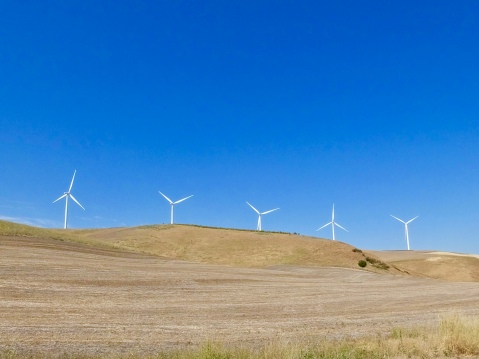 This picture was taken within a mile of where the expedition would have marched.

But the weather was good, as were the roads, and I had a pleasant ride from Walla Walla, Washington, to Orofino, Idaho.  Not challenging in a “twisty” sort of way, but a nice gentle ride with sweeping curves, long-range vistas and time to think about changes that occurred in the past 200 years.

When I rode through here on August 5, less than a week ago, I wrote about the problem I had trying to go to Weippe Prairie using my GPS-provided guidance, which apparently forgot I was on two wheels and expected me to travel down unmeasured gravel roads.  Coming from the opposite direction today, however, the GPS promised me a State Highway to Weippe that I knew would be paved.  So, as directed, I crossed the Clearwater on a bridge under construction, and began the steep climb up the towering river hills.  I had gone less than 1/2 mile when a sign announced “Loose Gravel Ahead.  Motorcycles Proceed with Extreme Caution.”   Hmmmm.  How loose?  How far?  Important, but unanswered, questions.

Seized by yet another case of raging optimism and determined to see today what I failed to see five days ago, I proceeded on.  The loose gravel was a result of the chip seal operation the state highway department was employing to resurface the road.  OK, I thought.  They’re going to work on a short stretch of road.  I can handle this.  But no.  As it turned out, they’re resurfacing the entire 5 1/2 miles of twisting mountain road with a dozen or more hairpin turns leading from the river to the prairie plateau.  On loose gravel.  Once on the gravel, there were no safe places to turn around, so, onward and upward I went.  At about 15-20 miles per hour with gravel clinking and clanking against the underside of my fenders.  I finally reached the top of the river hills and the end of the road construction, but not before one particularly tight and steep section caused the bike to lose traction with both tires at once.  It was only a momentary slide, but I have to admit that slide raised my “pucker factor” to an 8 on a 10-point scale.

Shortly I came to the town of Weippe (remember it’s  wee ipe) on the Weippe Prairie where I knew there was a Lewis and Clark exhibit and interpretive center at the local library and where I could learn more about the first and last meetings the expedition had with the Nez Perce.  I pulled up at precisely 1 o’clock only to learn that Saturday hours were 9 a.m. to 1 p.m.  I opened the unlocked door, stepped in, and pled my case to a kindly assistant librarian.  She kindly allowed me 10 minutes to look quickly through the displays, and I appreciated her timely flexibility.

She locked up the little library and I left the site to look at the small and growing smaller town.  Not much there, but they did have a local museum with hours posted outside indicating it stayed open until 4 p.m. on Saturdays.  I didn’t expect much on Lewis and Clark and got what I expected.  But the sole operator of the museum talked with me for a while about the Prairie itself and her declining town.  She also confirmed my suspicion that there was a third road that led to the prairie from the river highway.  It would be longer by as much as 20 miles, but, hopefully, it wouldn’t have any loose gravel on it.  Given the choice of going back down the “Loose-Gravel-Ahead.  Motorcycles-Proceed-With-Extreme-Caution” road and taking a chance on another, longer road, I opted for the latter.

As it turned out, that road, unnumbered but named for a town I don’t remember seeing, was a great motorcycle road.  Good surface. Nice turns with no hairpins.  Winding through an aromatic pine forest.  It was about 20 miles long and brought me out in Orofino where I started today’s journey to Weippe Prairie.  It was a good way to end the day.

Rain obscured the horizon as I pulled into the parking lot of my old-but-clean motel in Kamiah, and a few drops splattered my windshield and muddied the dust on my fenders, but I was mostly dry.  Tomorrow, however, may be another story.  Thunderstorms are forecast for western Montana.  Nevertheless, I’ll proceed on.