For the first 40 miles today, beginning at 7 a.m., I rode north on Interstate 29, which parallels the Missouri River and rarely was more than half a mile from it.  I chose the Interstate to start the day because I knew I had 350 miles to cover and several stops to make along the way.  And it was going to be HOT. 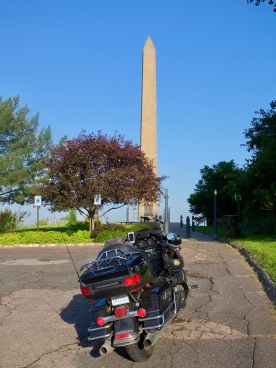 Beneath the obelisk lies Sergeant Charles Floyd, the only fatality among the expedition.

Despite all the hazards, dangers, and accidents that befell the members of the Corps from 1804 to 1806, only one member of the group died during the expedition.  Sergeant Charles Floyd, a 22-year old Kentuckian, had been picked up when Clark joined Lewis in Clarksville in 1803.  He quickly caught the captains’ attention and was promoted to sergeant while the expedition wintered at Camp River Dubois.  On August 20, 1804, after several days of incapacitating stomach pain probably related to a burst appendix, he died just south of present day Souix City, Iowa

He was buried with honors by the Corps and now lies beneath a 100 foot tall obelisk on a high bluff overlooking the Missouri River.  That site is approximately 40 yards east of the first burial because his original grave had been disturbed when the bluff began to fall away into the Missouri River  This morning, I paid my respects to the voyage’s only fatality.

At Souix City, the Missouri turns west again for 150 miles, with Nebraska to the south and South Dakota to the North.   More importantly, the area consists of extensive plains that, for the most part, stretch from the eastern borders of Kansas, Nebraska, South Dakota and North Dakota all the way to the Rocky Mountains.  There were, of course, hills that bordered the Missouri River, but beyond the river bottoms and the defining hills lies a vast, largely treeless prairie inhabited by thousands of animals that astonished the frontiersmen of the expedition, whose life east of the Mississippi had not prepared them for the country they were exploring.  One of the best early descriptions of the western plains came from Captain Lewis on September 17, 1804, following a walk through the South Dakota country through which I rode today  (don’t blame me for the spelling; that’s all on Lewis):

this plain extends back about a mile to the foot of the hills one mile distant and to which it is gradually ascending . . . . the shortness and virdue [verdure] of gass gave the plain the appearance throughout it’s whole extent of beatifull bowlinggreen in fine order.   …  found the country in every direction for about three miles intersected with deep revenes and steep irregular hills of 100 to 200 feet high; at the tops of these hills the country breakes of as usual into a fine leavel plain extending as far as the eye can reach.    from this plane I had an extensive view of the river below, …  to the West a high range of hills, strech across the country from N. to S and appeared distant about 20 Miles; they are not very extensive as I could plainly observe their rise and termination    no rock appeared on them and the sides were covered with virdue similar to that of the plains    this senery already rich pleasing and beatiful, was still farther hightened by immence herds of Buffaloe deer Elk and Antelopes which we saw in every direction feeding on the hills and plains. I do not think I exagerate when I estimate the number of Buffaloe which could be compreed at one view to amount to 3000.

From a bluff overlooking the Missouri River near where Lewis wrote his description of the endless plains.

My second historical site stop for the day was Spirit Mound, about 4 miles north of Vermillion, SD.  From the Lakota people they met along the river, members of the expedition had heard about Spirit Mound, a small hill believed to be occupied by mysterious and possibly dangerous little people.   Regarding the hill, Clark recorded on August 24, 1804, that  “by all the different Nations in this quater [it] is Supposed to be a place of Deavels or that they are in human form with remarkable large heads and about 18 inches high”  The following day, Lewis, Clark and a small party walked from the encampment about four miles each way in the blazing heat to see the hill and, perhaps, the devils.  They didn’t see them, nor did I.  What they did see was vast herds of elk and bison, countless prairie dogs, coyotes dens, and the first bat they had seen on the trip.  I didn’t see any animals except butterflies and dragon flies, but I did see on my two mile hike to the top of Spirit Mound and back a designated “National Historic Prairie” that botanists and biologists are restoring to the condition seen by Lewis and Clark, and that includes scores of native plants and flowers.

My final stop on today’s long, hot (95 degree) ride had nothing to do with Lewis and Clark, but was personally and  historically significant.  One of my Habitat for Humanity construction colleagues in North Carolina was formerly the President of Dakota Wesleyan University, a fine school, and the home of the George McGovern Library and Museum, which he played a major role in bringing to fruition.  Dr. Jack Ewing had suggested if I was in the area I should stop by.  It was only a 50 mile detour, so I headed for Mitchell, SD,

In the late 1960s and early 1970s, in the middle of the Viet Nam War and the anti-war protests, at the end of my turbulent undergraduate days I became involved in politics, protests and elections, especially that of Senator George McGovern, who in 1972 attempted to unseat Richard Nixon and bring honor, honesty, decency, integrity–all things that Nixon did not possess–back to the White House. McGovern a WWII recipient of the Distinguished Flying Cross and holder of a Ph.D in History from Northwestern University, was soundly defeated by the crook in the White House in the landslide election of 1972.  The following year, Nixon resigned in disgrace to avoid impeachment and certain removal from office; McGovern was awarded the Presidential Medal of Freedom in August 2000 and the medal is in the museum.  The first-rate museum dedicated to his amazing life and multi-faceted, humanitarian-based career brought back deep seated memories of my formative college days.  Thanks for the suggestion, Jack.

Eleanor McGovern, George, and me, in front of the McGovern Library on the Campus of Dakota Wesleyan University.

Tomorrow I’m back on the trail with Lewis, Clark and the gang as I continue moving north along the Missouri River to Bismark, ND.