When Captain Lewis left Washington, D.C., on July 5, 1803, he had a pretty good idea of the schedule he planned to keep on his way to the Pacific and expected to be hundreds of miles up the Missouri River west of St. Louis before cold and ice halted the Corps of Discovery.  In the spring of 1803, during visits to Philadelphia and Harpers Ferry, he ordered supplies to be delivered to Pittsburgh, where the Ohio River is born of the joining of the Allegheny and Monongahela Rivers and where he had contracted for a 55-foot keelboat to be built and ready by July 20.  He arrived in Pittsburgh July 15 only to discover the keelboat was nowhere near ready and the drunken shipbuilder in charge had a boatload of excuses but no boat.  Lewis had tons of supplies waiting to move downstream, he enlisted three men who would become part of the permanent party plus several more adventuresome souls to help transport his supplies down the Ohio, and then he waited.  And waited.  On August 31, a month and half after he reached Pittsburgh, he and his crew finally launched their craft on an Ohio River woefully short of water, which made moving a keelboat with a three-foot draft a frustratingly time-consuming challenge.

A month and a half later, on October 14, Lewis and his group reached Captain Clark in Clarksville, Indiana, across the river from Louisville, Kentucky.  Lewis must have been anxious to press on, but the group, now grown to more than a dozen with the addition of at least seven men chosen by Clark, delayed leaving Clarksville until October 26 and didn’t reach the confluence of the Ohio and Mississippi Rivers until November 20.  After rowing upstream for more than three weeks, on December 12 they ultimately reached their destination on the Mississippi River across from the mouth of the Missouri River and a few miles upstream from St. Louis.  There they would stay for five months, enlisting and training new recruits for the Corps of Discovery and preparing for a spring 1804 start up the Missouri on their voyage across territory that now officially belonged to the United States thanks to the recently ratified treaty confirming the Louisiana Purchase.

Despite years of preparation, Lewis’ plan to be several hundred miles further west before stopping for winter had been upset by numerous delays over which he had little or no control.  Isn’t that the way things usually work out?

I mention all of this historical background to help put in perspective today’s travels. 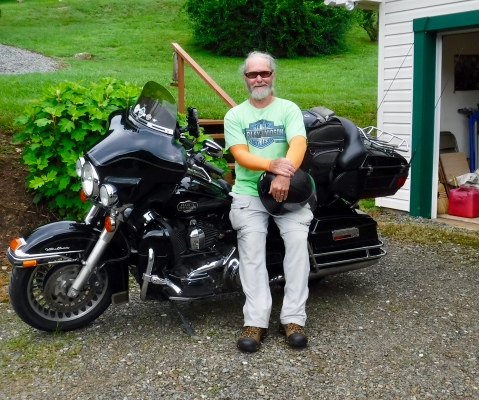 Prepared and packed for an early departure.

After years of planning and months of preparing, I rolled out of my driveway this morning a little before 8 a.m., ready for a 350-mile ride through Kentucky to Clarksville, Indiana, where Lewis and Clark had joined forces in the fall of 1803.  A little rain splattered my windshield as I passed through the northeast corner of Tennessee, but not enough to be of concern or to slow me down.  I had a schedule to keep.  I had plans.

About 10:30 a.m. and two miles from the Kentucky border, I glanced at my gauges and noticed, to my great dismay, that the check engine light and the battery light were both illuminated and the voltage gauge was reading 11 volts when it should have been reading 14.  I crossed the border at Cumberland Gap, braked to a stop a mile or two later in Middlesboro, and began assessing my sorry situation.  I suspected it was a stator (think alternator) gone bad or the voltage regulator.  In either case, I knew I couldn’t ride the bike far because the battery would eventually die and I’d be stuck on the side of the road.  The fact that today is Sunday and that Middlesboro doesn’t boast a Harley-Davidson dealership severely limited my options to get back on the road quickly.

I had noticed a Harley dealer about an hour earlier as I whizzed through Morristown, Tennessee, and a quick internet search showed that Colbochs Harley-Davidson was indeed the nearest source of help.  The dealership was open from 12 to 5 but the service department wouldn’t open until tomorrow at 9 a.m.  At noon I called the dealership to see if anyone there could help transport my bike 45 miles back to their shop.  They didn’t have anyone who fit that bill, but Ernie, the sales manager, went above and beyond and made some calls until he found a towing service that would come to Middlesboro, pick up my bike and me, and deliver us to the dealership.  Arrangements were made and a driver with a roll-back truck was promptly dispatched.

There is no sorrier sight than a Harley Davidson on a roll-back truck.

That solved part of my problem.  Now I had to figure out where I was going to spend the night.  A series of conversations with Marilyn resulted in her driving 75 miles to Morristown to pick me up and take me back to Maggie Valley, where I currently sit sipping a well-deserved glass of Jack Daniels, pondering the annoying vagaries of travel in the 19th and 21st centuries.  Tomorrow, if Ernie is true to his word–and I have no reason to think he won’t be–Colboch’s crack service department will dismantle my aged bike first thing, remove bad things and install good things, and get me on the road again ASAP.  I’m hopeful their call to me tomorrow morning will be good news and that I can pick the bike up early in the afternoon, and, like Captain Lewis two centuries before me, continue my unexpectedly delayed trip to St. Louis.  If not tomorrow, then an early Tuesday delivery will still get me to St. Louis Tuesday evening after 10 hours and 550 miles on what will probably be wet roads thanks to the rainy remnants of Hurricane Barry.

I’ve said before that these trips are adventures not vacations.  But I didn’t expect this adventure to start producing the unexpected so quickly.  Stay tuned to see what further misadventures enhance the Magical History Tour.

By the way, for those who follow the blog just to see what pie I eat, today’s pie was leftover cheesecake at home.  And yes, cheesecake is technically pie.