I don’t always get as much exercise as I would like when I’m on the road, what with pie stops and long hours in the saddle, but today was an exception.  Before the flat, windy plains of Kansas got too hot (95° this afternoon), I walked 2.5 miles with my sister-in-law, Ulla.  That wouldn’t be too remarkable except that Ulla is currently finishing six months of cancer chemotherapy.  We walked at a fairly brisk pace and chatted the whole way.  I was pleased and impressed.  So was she.  It was a great way for both of us to start the morning. 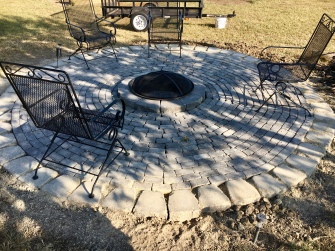 Brother Jon usually has half a dozen house repair/remodeling-related projects underway at any give time–painting, plumbing, building a room in the basement, laying paver stones for a fire pit, buying and repairing a cement mixer–you get the idea.  This morning’s task involved laying flagstones at the foot of the deck he built next to the swimming pool.  And he graciously said I could help!

My first assignment was to bring several wheelbarrows of crushed rock from the pile in the front of the house to the backyard to serve as the leveling base for the flagstones. That, of course, meant shoveling the crushed rock from the pile into the wheelbarrow; it doesn’t just get there by itself, you know.  OK.  Load the wheelbarrow, wheel it through the grass to the backyard, dump it and smooth it out. 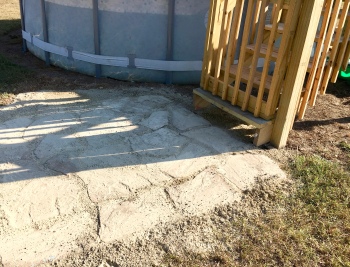 Then lay down the flagstones.  Not once, but several times, because flagstones don’t have even edges and you have to figure out the best pattern to keep the joints between the stones as small as possible.  So bend over and lay ’em down, bend over and pick ’em up, bend over and lay ’em down again.  Apparently moving stones adds to their weight because they got heavier each time we realigned them.  But finally, they were all laid.  Done?  Nope.  Then I had to get more crushed rock to fill in the cracks and even the edges.  And then it was done.  And so was I.  But, my kid brother (65) and I rocked.

I think I’m going to cut back on all this physical labor when I turn 70.  So, if anybody has any work for me to do, you better get your requests in during the next two months.

Having completed the morning’s chore, we took the afternoon off and went man-shopping at Menard’s for paint and hardware, walking reverently through aisles of tantalizing tools, alluring lumber and fabulous fixtures.  That completed, we took a mid-afternoon break for tiramisu and coffee at the Metro Cafe.  It wasn’t pie, but it was good.

Tomorrow it’s OTRA (on the road again) and kick stand up at 7 a.m. to begin a five-hour ride across eastern Kansas to Rogers, Arkansas, home of the Walmart Waltons, but more importantly home to good friends Mike and Diane from Tennessee days.  It will be great to see them again and to spend a couple hours catching up before I finish the day’s warm, windy fall ride to Russellville in the middle of the state.