After brother Kent deposited Mary Rose back at their house last night following 11 hours of adventure park fun, he joined me in the lobby of my hotel for coffee and conversation.  It’s always nice to have one-on-one time to catch up on family news.  But in addition to talking about our families, Kent and I also explored my plans for future rides, including the “Lewis and Clark Trail” ride I hope to make in 2019.  Properly done, that ride should take me from Pittsburg, Pa., to the Oregon coast.  And part of that ride would take me into Nebraska where the expedition stopped several times on their trip up the Missouri River.  Kent told me about a Lewis and Clark visitor’s center very near where I was going to be riding today, so I made a slight detour to check it out.   The modern center was not open when I stopped by early Sunday morning, but they did have one exhibit outside that was worth the short visit.  It was a replica of the keel boat built in Pittsburg under Lewis’s direction and which went up the Missouri River for several hundred miles before being sent back to St. Louis with scientific specimens.  I mention all of this because it’s chance happenings such as this that help maintain my enthusiasm for future trips.  I’m really looking forward to a six-week, 8,000 mile history trip following the route taken by the Corps of Discovery in 1804. 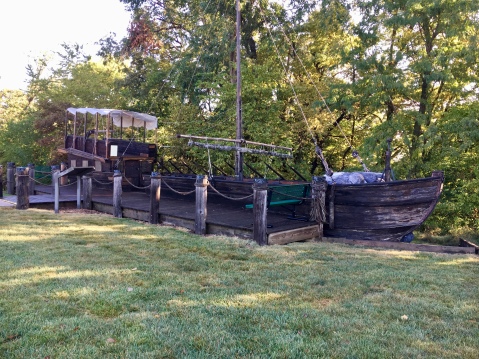 Replica of Lewis and Clark’s keelboat located in Nebraska City.

A good part of the day was spent in Topeka, the town where I grew up, with one of the people I grew up with.  Jaylene and I first met in the third grade and stayed in the same schools together until graduation from high school a decade later in 1965.   During our high school years we even worked at the same drug store.  Today we reminisced about grade school teachers, high school friends, and the trials and tribulations of growing up in Topeka.  After lunch at her favorite Italian restaurant, we toured our old neighborhood and drove by each of our respective houses, neither of which now looked very much like the houses we lived in then.  Much has changed, but, fortunately, the bonds of friendship formed in grade school stayed solid even after 60 years.  The few hours I spent with Jaylene today made for an enjoyable trip down memory lane with my one remaining link to my Topeka childhood.

After a two-hour ride southwest on the Kansas Turnpike, which my dad helped engineer in the 1950s, I rolled into brother Jon’s driveway in Andover, just east of Wichita.  Over a great steak and a beer, we began to catch up on our lives since I rode through here last year on the motorcycle ride to Alaska with Mark.   For a few days this week, the mini Kansas family reunion will continue.