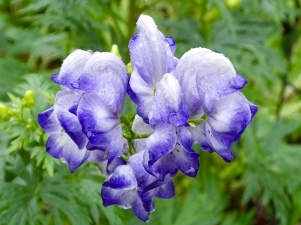 Alaskans and non-Alaskans refer to the Kenai Peninsula as Alaska’s playground, but they also refer to it as Alaska’s rainforest because of the inordinately large number of rainy days. We’ve been on the Peninsula for three days and it’s rained each of those days, though only one was hard rain.  Today produced another low-cloud, misty rain that waxed and waned, with the occasional spot of blue sky poking through, only to be covered by fast moving clouds that played whack-a-mole with the blue spots.

I fully expected rain would fall or at least float in the air while we were here since that was my experience three years ago.  There’s nothing to do but suit up in rain gear and hit the road, so that’s what we did.

Had we made a direct dash to our destination in Soldotna, we would have had only a two-hour, 95-mile ride.  But two hours and 95 miles rarely add up to adventure. 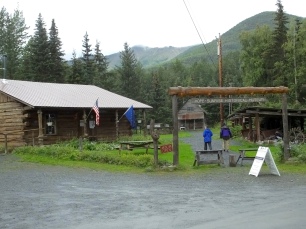 I decided to return to some of the places I saw three years ago, heading first to the hamlet of Hope, where I hoped to meet again with Bill Miller, an elderly, nearly blind gentleman who had given us a fascinating tour of the local museum and filled us with tales of life in Hope and with stories of the great earthquake of 1964. 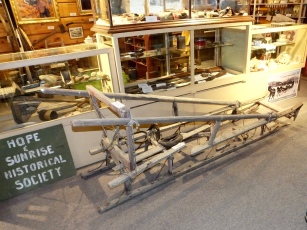 Unfortunately, I learned from Diane, the woman staffing the Hope & Sunrise Historical Museum today, that Bill died two years ago, a sad loss for the community and for those like me just passing through who learn so much about a community from passionate residents who love it. Diane, who also clearly loves the community, walked us through the small but well-stocked and well-interpreted museum, explaining in some detail about the early mining years of Hope and nearby communities. 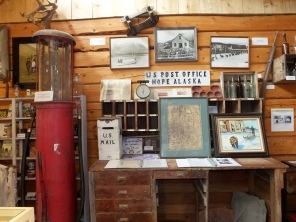 The discovery of gold in Hope, for example, preceded the famous Alaska Klondike Gold Rush and attracted several thousand miners in 1896.  She answered all our questions patiently and thoroughly, and we left the museum and toured the museum grounds with a much better understanding of this little place called Hope.

Three years ago when I drove through Hope it seemed nearly deserted, but today its muddy, rutted streets were packed with cars and people, and the RV camp was filled with trailers and RVs of various types.  When I inquired about the crowds at one campsite, the outdoorsy bearded gentlemen there informed me that (a) the salmon were running strong in the creeks and rivers and (b) there was a 100-mile mountain bike race going on.  It turns out we hit Hope on one of its busiest days of the year. 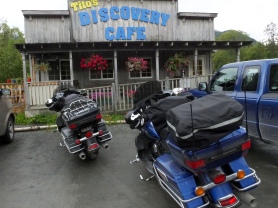 We dismounted at the Discovery Cafe in Hope for hot coffee to counter the cold rain, and I think I learned why they give it that moniker.  I discovered PIE.  Lots of PIE.  Choices.  Choices. Choices.  But I had never had Plum Pie made with fresh plums, so I snagged a big piece.  Outstanding!

Another place I wanted to take Mark was the Begich-Boggs Visitor Center in the Chugach National Forest at Portage Glacier.  The wind was howling and the horizontal rain coming out of the misty clouds obscured any view of the retreating glacier and even of the lake the glacier has left behind.  So we spent an hour or more reading the exhibits and watching a professionally produced movie about the glacier, Prince William Sound and the people who live there. 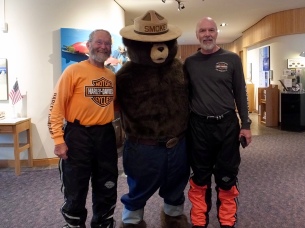 As an added bonus, we got to meet and greet Smoky Bear who, we learned, is having his (or her) 75th birthday this week.  We muscled our way to the front of the line past waiting children to get our picture taken with the furry celebrity.

Whether we were in Hope or at Portage Glacier (so named because of the relatively short 12-mile portage across the glacier between Prince William Sound and Cooke Inlet), the impact of the 1964 earthquake,  at 9.2 on the Richter Scale the largest ever recorded in North America, was palpable.  Many of the buildings in Hope, for example, had to be relocated because the land shifted downward eight feet and high tides continuously flooded the hapless buildings.  In Seward, one-fourth of the town was destroyed.  And on the small island of Chenega, the tsunami that followed the quake wiped out an entire native village.

We finally headed for Soldotna with only a small amount of rain along the way.  Located on the western side of the Peninsula, Soldotna will be our base for the next three days as we try our luck with the salmon and the halibut.  Rain is in the forecast, but it usually is on the Kenai Peninsula.