I scheduled Alaska Redux for 42 days from Maggie Valley to Maggie Valley; today marks the half-way point of this year’s adventure.  Three weeks ago Mark and I rolled down the hill at Raven Ridge and hit the road with great expectations.  It’s been an incredible three weeks.  I’ve logged nearly 6,000 miles on some great roads, some good roads and some hot and dusty roads.  I’ve seen bears, bison, moose, antelope, big horn sheep and mountain goats.  I’ve been flight seeing with Dave.  I’ve seen Denali on a clear day.  I’ve hiked the  woods and took time to stop and smell the mushrooms (there weren’t any roses). I’ve seen beautiful mountains and wide open spaces.  And I’m only halfway done. Can there be this many more high points still to come? 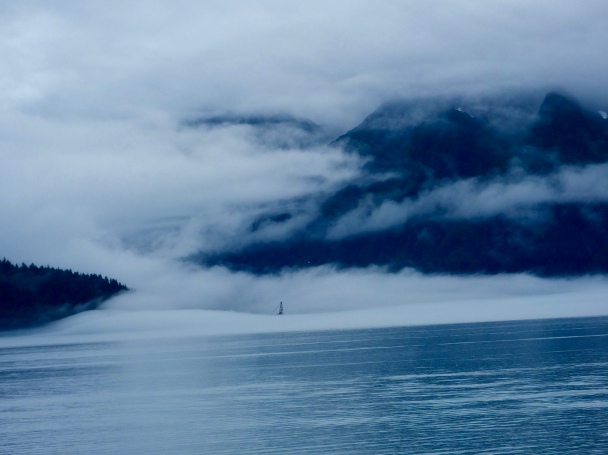 Today was another planned non-riding day, this time in the ocean-side town of Seward on the Kenai Peninsula.  Next to the town rises a 3,000 foot mountain where each Fourth of July they stage a brutal race up the mountain and down.   This crazy tradition has been going on for more than 100 years and gains popularity each year.  More than 800 runners are selected to take part in this insanity, with the winner covering the ground (which has an average slope of 34 degrees!) in a little over 41 minutes. Serious injuries are common each year as runners race pell-mell and hell-bent-for-leather sliding down rocky slopes and sluicing along muddy trails.  I had no intention of running this trail, but I had planned to hike it.   Unfortunately, the cloud cover and mist on the mountains was so bad that a trip to the top would have been rewarded with no view of Resurrection Bay or the mountains on the far side.  So we opted for less strenuous visits to the Sea Life Center in town and Exit Glacier outside of town.

Owned by the state of Alaska and dedicated to studying and conserving the incredible abundance of sea creatures (feathered, finned and furred) that call the Gulf of Alaska home,  it’s an aquarium, but it’s much more than that.  It’s a research center, a teaching facility and a hospital and rehabilitation center for sick, injured and endangered species.

We spent two hours slowly touring the facility, watching seals and sea otters cavort in their pools, learning about dozens of species of fish (including the Coho or Silver Salmon we hope to catch Sunday and the halibut we expect to land Tuesday), and enjoying the antics of a variety of colorful and raucous sea birds.

The knowledgeable volunteer interpreters detailed the creatures’ lives and explained the importance of maintaining a healthy, sustainable fisheries and conservation program.  Our two hours were well spent.

Then we headed to Exit Glacier at the eastern edge of the 1,100 square mile Harding Icefield, which spawns more than 40 other glaciers reaching out in all directions.  Exit Glacier is the only glacier accessible by car or motorcycle, and tens of thousands of tourists visit it each year.  The starting point for a visit to Exit Glacier is a National Park Service interpretive center, followed by a 1 1/2 mile hike up to the nearest point or the receding ice mass.  No one is allowed on the glacier without special permission and appropriate climbing and safety equipment.

Luckily, as we started up the trail, we found a young ranger about to take a group of six tourists up the trail, teaching along the way about glaciers in general and this one in particular.  I asked if it was a private tour and she said, “No.  Join us.”  So we did.  Good decision.  Ranger Stephanie helped everyone better understand the process of studying glaciers, pointing out, for example, that scientists measure the chronological recession of the glacier by studying the growth of lichens, weeds and grasses, willow and alder and finally cedar trees in the areas the glacier has left behind.  As a result, they’re able to document the loss of ice over the past 100+ years as the glacier shrinks and the tongue or face continues to march backwards up the mountain.  In recent years, photographic evidence shows where the glacier was but is no longer.

Ranger Stephanie kept up a good pace as we walked up the mountain, and I joked about her running the Mount Marathon race to stay in shape for her job.  The diminutive ranger then surprised me by saying she had run the race not once but nine times, including a respectable 1 hour and 13 minute finish this year.  She’s only been with the NPS for a year, but she fell in love with Exit Glacier 24 years ago when as a six-year old she visited her grandmother in Seward.  When she finished college in the lower 48, she moved to Seward.  Her passion for the outdoors and for all that Alaska has to offer, especially its glaciers, was clear. As we parted, she drove home to the band that followed her up the hill that we all have a responsibility to understand and perhaps to halt the deleterious impact of man-made climate change.

Tomorrow, rain or rain, we go to Soldotna to prepare for some long-anticipated fishing.