Day 19: A Peaceful Day in Talkeetna

Non-riding days on Adventures should, ideally, include something unique. Flight seeing, for example, or, in today’s case, hiking through the woods enjoying the profound stillness there. After weeks on a motorcycle, sometimes it’s good to listen to the soundlessness that silently fills the forests and to look around at the small things that grow there.

Before we began our hike, though, we started with a full breakfast at the Roadhouse where seating is family style. That means you’re going to be breaking bread (or cinnamon rolls) with strangers who join you at your table. While the breakfast fare was good, the breakfast company was even better. We met a young woman from Germany, a couple from Palm Coast, Florida, and a family from Texas, all of whom had stories to tell of their Alaska visit and who listened patiently to our stories and who even seemed interested in the blog. We heard about fly fishing and saw pictures of big salmon, we heard about hopes for a flight-seeing adventure to Denali, and we learned about plans for a family rafting trip minus a pregnant wife who would have to wait patiently on shore. Meeting new people, even when no lasting bonds are formed, is always one of the true joys of these adventures.

A National Park Ranger Station across from our hotel is literally the starting point for anyone who wants to scale Denali. Climbers have to check in there, register, and go through a thorough safety briefing. (The climbing season is over now, but more than 1,100 hopeful climbers registered and more than 600 actually gained the summit in 2016.) We had a much shorter hike in mind, however, and the helpful Ranger directed us to nearby Talkeetna Lakes Park, which has several hiking trails. The 1,200-acre park boasts four small lakes and about eight miles of trails that wind up and down through the hills and around the lakes. Perfect for a couple of elderly gentleman hikers out for a stroll.

With our backpacks full of cameras, granola bars, water, and beef jerky we walked five miles around two of the lakes and past the other two. Slowly working our way around the  picturesque ponds, and only occasionally encountering other day hikers, we took time to absorb the quiet, to study the small things that hide in a forest, and to enjoy the soothing peace that comes with a walk in the woods. I found myself especially interested in the small things that grew on the forest floor, adding color and diversity to the overwhelming forest greenness and spent my photographic time focusing on the hidden, the obscure, and the often missed mini-treats that flavor the forest. 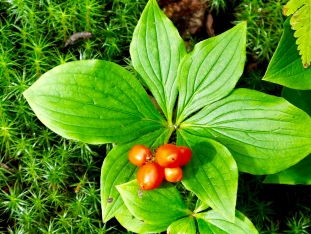 As we walked along the trail, we would sometimes stop and listen to–nothing.  No planes, cars, motorcycles, not even any birds.  The woods were still and peaceful and wonderful.

The only wildlife I saw besides an easily spooked squirrel, were some ducks on the second lake and a Golden eagle that seemed to be harassing the ducks, though when we saw him fly off his talons were empty.  So we watched the ducks dive and resurface, spread their wings as if to fly and then sit down in the water again.  Their antics were a pleasant diversion.

The three-hour walk through the woods did me good, stretching my tight muscles and massaging my soul.  An adventure doesn’t always have to be experienced with double-yellow line passes and speeds in excess of the recommended limits suggested by Law Enforcement Officers.

Following our perambulation and for the remainder of the day we took in what the burg of Talkeetna had to offer, which, frankly, isn’t a great deal.  Its historic main street, with some buildings dating back nearly a century, is a brief four-blocks long, and most of the buildings there are now occupied by gift stores, restaurants, and guide services.  It is, in short, a tourist town that can be seen in an hour or two by the travelers riding on the Alaska Railroad that stops at a small depot who disembark for a quick shopping spree to buy a stuffed moose and a coloring book for the grandkids and t-shirts for themselves.  The residents, largely artists, ancient hippies, young hippies and gentle misfits, tolerate tourists like us. 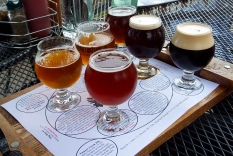 The town once had a brewery, but it was so successful it moved out of town about five miles to a bigger location. As guests in the town, the least we could do was support the local industries so we opted for a beverage-enhanced dinner at the Denali Brewing Company restaurant. We each selected three locally brewed beers for a taste test. All were good, but my favorite was a Scotch Ale while Mark gave a thumbs up to a porter, which we then ordered with dinner from Cassie who was serving us. 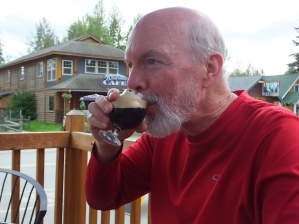 Tomorrow we pack up, say goodbye to the one-star hotel with its pitiful wifi connection that has been our home for two days, and motor south through the projected rain showers to Steward and more adventures.

7 responses to “Day 19: A Peaceful Day in Talkeetna”