For centuries before whites arrived in Alaska, Natives referred to the 20,310′ mountain in the middle of the state as deenaalee, which in Athabaskan means “The Tall One.”  Since the early part of the 20th century, Americans referred to the big mountain as Mt. McKinley, even though President McKinley never saw the mountain and didn’t seem to care much about it.  While it may still officially be called Mt. McKinley, to most folks it is simply:  Denali.  But there is nothing simple about it.

It is Grand. Gorgeous. Huge. Awesome. Magnificent. Incredible. Massive. Powerful. Impressive.  Inspiring.  It is many things.  But it is not simple. 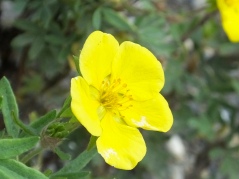 Obviously, Denali was the high point of today’s ride, even though I had bumble berry pie and met the oldest road construction flagman in Alaska.

We left Fairbanks this morning under cloudy skies with temperatures in the mid-50s but no rain falling and none on the weather radar on the road we were going to ride.  Not many miles out of Fairbanks, we climbed a ridge and rode slowly along with distant mountain views often on either side plus a brief look at Skinny Dicks Halfway Inn as we sped by. It was like flight-seeing from a motorcycle.

Two hours of easy riding brought us to Rose’s Cafe in Healy, where three years ago I ate my first bumble berry pie.  Today I ordered this delight once again and savored a mixture of fruit that probably included raspberries, blueberries, maybe strawberries and even an occasional cherry.  Bumble berry pie describes pie made with whatever leftover fruit is available.  It was as good this time as it was three years ago. 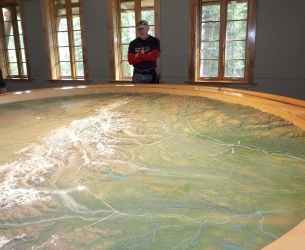 Although I hadn’t planned a trip into Denali National Park, today’s ride was only 270 miles, which shouldn’t take more than five or six hours, so we headed into the park to check out the visitors’ center.  We looked around, watched an 18-minute, nicely done video synopsis of the park, and looked around a little longer at various professionally-designed interpretive displays.  At the end of two hours, I suggested we extend our unplanned visit, so we visited the park book store and then rode 15 miles to the end of the Park road open to the public.  Little did we know, though we should have guessed, that this road, like all others in Alaska, would be under construction.  For 12 miles of its 15 mile length.  The ride into and out of the Park took twice as long as anticipated.

Most of the construction work is being done at night so we negotiated a mostly bumpy, rutted, cobbley, dusty, muddy road with no road closures or flagmen.  But it was worth the added accumulation of grime and crud on our embarrassingly dirty Harley-Davidsons because we spotted three caribou in the brush and I was able to get a shot of one. 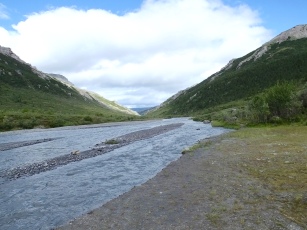 A brief sprinkle chased us into our rain gear on the way in, but at the end of the road was a nice view of a river tributary flowing down a valley as well as several nice views of the mountains in various states of cloud cover.  In short, this was the kind of three-hour detour that makes adventures adventursome.

Even with a three-hour detour, I still expected to be in Talkeetna, our day’s destination,  by 4 p.m. or 5 at the latest.  But then I hadn’t factored in the likelihood we would come upon road construction again or that the road constructors were having problems of their own that resulted in long delays and lines of cars 2 miles long behind the pilot car.  But, of course, that’s what we encountered as we slogged down Alaska Highway 3, the Parks Highway.

One dusty delay did give me a chance to meet the self-declared “oldest flagman in Alaska” who hails from the metropolis of Chicken, Alaska (pop. 35).  Although he didn’t give us his name, he did inform us he had come out of retirement to work this summer for $43 an hour, roughly $4,000 a week holding a stop sign at a dusty road-construction site.  The money, he declared, would be used on a trip south to buy new teeth, which, as he showed us, were badly needed to bring his dental needs to a suitable utilitarian state.  The discussion of his dentition deficiency came about when I offered him a piece of beef jerky and he had to decline because he couldn’t chew it.  It’s amazing what you learn when you stop on a motorcycle at the front of the line at a road construction waypoint.

Tomorrow we’ll see what Talkeetna has to offer.