No riding today, so no GPS Tracking Map. 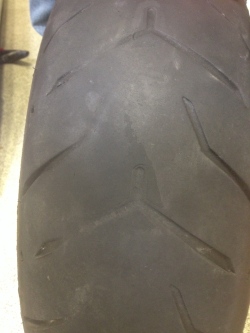 Not much tread left on the tire that carried me through the deluge in the Ozarks yesterday. That could explain why the back end seemed a little unstable at times.

I exaggerated in yesterday’s post when I said my rear tire had 1/32″ of tread left.  It was nearly bald when I brought the mud-spattered Ultra Classic to Alef’s Harley Davidson this morning in Wichita.  But now I have a new tire with 9/32″ of tread, and that should get me up and down the Rockies to northern Canada and back.  I’ll keep a watchful eye on the front tire during the rest of the trip, but I’m hopeful it’ll last until I’m back in NC.

The sharp-eyed mechanic at Alef’s found a bad rear wheel bearing (that explains the whirring sound I heard as a leaned into the mountain curves), so I had them replace both rear bearings.  It’s not a good idea to have the rear tire lock up with a siezed axel when negotiating steep and twisting mountain roads (or any roads for that matter).  The new bearings were not an expensive fix ($80) and I’m glad he discovered it before it became a serious problem. 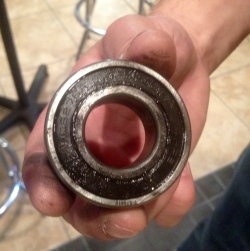 You can’t see the pitted rollers, but you could feel them. A bearing with bad seals is a bad bearing.

Waiting for the tire change and wheel bearing replacement, I had time to shop.  Friend Dan had bought a really cool shirt before visiting us in North Carolina last month, and I got one just like it.  Long-sleeved and thin, white material for sun protection and hot weather riding.  Should come in handy in Kansas, southern Colorado and New Mexico.  I also found a pair of riding gloves that I’ve replaced every two years for eight years, so I got a pair of those also. I don’t know if it matters to the way the bike handles, but my wallet’s weight dropped dramatically as I completed my motorclothes purchases at the dealership. Clearly, if I’m talking about shopping, there isn’t much to report on the GRMA motorcycle front today.  My apologies, but family stops are important, too.

This afternoon I went to see my brother Jon’s new property.  He’s moving out of a condominium complex which he believes to have an idiot infestation and onto 10 acres with two houses.  He calls it “the ranch.”  But our friend Linda has 8,000 acres in Wyoming that she also calls a ranch.  I guess it’s all relative.  He’s got some work to do to put the houses in the shape he wants them, but he enjoys that kind of thing and has time to work on them.  I offered to help complete all the repairs and various fixes tomorrow, but he’s only going to let me help put in a new window.

I think tomorrow I may write a little about what’s coming up during the next four weeks on the road while I circumnavigate the rugged Rockies.