Click here for the GPS Tracking Map (Good for 7 days)  Zoom in to see more specific locations.  Click on any of the reference points for more information.  Remember that the GPS only records where I was every 10 minutes; it may not follow roads exactly. 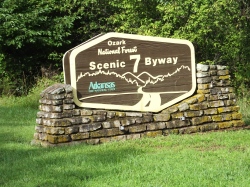 This road should be on everyone’s bucket list. Not dramatic, but very beautiful.

Knowing that today’s ride of nearly 500 miles would be longer than the first two days, I hit the road at 7 a.m. to get an early start.  Good idea.  After riding 40 miles along I-40, I turned north on Arkansas Scenic Highway 7, a road I’ve ridden several times and will ride again whenever I get the chance.  It’s a beautiful ride and I highly recommend it if you’re in the area.  The sky was overcast all morning as I wound my way through the Arkansas Mountains, but rain didn’t seem to be imminent, so I didn’t worry about it.

The early morning fog lifts off the Boston Mountains in the Ozark National Forest.

The Boston Mountains of north-central Arkansas, through which runs Arkansas 7, are part of the Ozark Plateau, which is part of the larger Ouichiita Uplift and were created about 300 million years ago.  They are part of the highest elevation between the Appalachians and the Rockies, which is also known as the interior highlands.  Enough geography.  Suffice it to say that they are beautiful and make for great motorcycle riding. 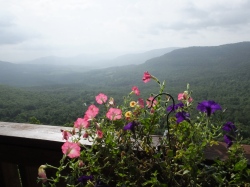 Pie, coffee and a gorgeous view at the Cliff House Restaurant.

Along the way, at about 9:30, I stopped at the Cliff House Restaurant, an establishment I’ve frequented in the past that I knew would have pie selections besides coconut cream.  And it has one hell of a view of the deepest canyon in Arkansas.  I had eaten the “Company’s Coming” pie (the state pie of Arkansas) before and knew that it would be too heavy for a 9;30 brunch, so I opted instead for Apple Pie, which, according to the menu, is so good it will make you want to slap your grandma.  Hey, I can’t make this stuff up.  That’s really what the menu says.  It was good, but I finished it with no inclination to slap either of my deceased grandmothers.

Finally, something besides coconut cream.

Following Arkansas 7 nearly to Missouri, I headed west for another 50 miles or so before darting northward to the Show Me State.  The Show Me State showed me rain.  About two miles after I crossed the Arkansas-Missouri border I had my first drops of rain and suited up before the real rains began.  Weather forecasters use colors in the radar images to show rain severity.  Green being the least rain and red being the most rain.  Missouri showed me RED rain for about an hour and orange rain for another two hours after that.

Everything was OK except for the fact that when I put on my rain suit I forgot to cover the pack sitting on the passenger seat behind me.  No real damage done.  Clothes were in plastic bags.  iPad was protected.  But my official US Passport now has a warped cover that looks like a DeLorean with the doors open.  It will still get me across the border, I think.

The rain started when I crossed into Missouri, and it stopped (at least temporarily) when I crossed into Kansas three hours later.   I had some additional green rain going west across Kansas to Wichita but not too much.  And by then I had covered my soaking wet pack with the rain cover.  Can someone say, “Yes, but the horse was already out of the barn.”?

My dear mother had a hot pot of homemade soup ready when I arrived in Wichita after 480 miles and 10 hours on the road.  So the day ended well.

Tomorrow I’ll get a new rear tire.  Oh, did I mention I was riding in Red Rain with a rear tire that only has 1/32″ tread?  Well, it wouldn’t be an adventure if there wasn’t a little butt-cheek clenching along the way.

Just because I liked the picture.

I’ll be in Wichita for two days and will head west to Colorado on Sunday.  But I’ll continue to post while I’m fulfilling filial responsibilities.