Gettysburg was cool and overcast this morning at 7:15 when the troops mustered at the bikes for our pre-ride briefing, and a heavy dew that covered the bikes overnight required some towel work.  But the 46 degree temperature had been expected and everyone was properly prepared with multiple layers of clothing and heavy leathers or heated gear.  No Civil War site visits had been scheduled for today, just a pleasant ride through the Pennsylvania, Maryland, West Virginia and Virginia countryside.

The cloudy skies stayed with us as we rode south on I-81 through the beautiful and fecund Shenandoah Valley, with 2,000 foot escarpments rising up on both sides.  The Valley had been crucial to the plans of both the North and the South during the Civil War, as it provided bountiful food stuffs for the Confederacy and served as a route for troops going both directions.  Several important battles were fought there and Stonewall Jackson gained much of his fame harassing and pummeling Union forces in the valley.  But we didn’t stop at the battlefields of the Shenandoah.  We had plans to ride the breathtaking Skyline Parkway and the Blue Ridge Parkway.

We entered the Skyline Parkway and Skyline National Park a few miles east of Harrisonburg, Virginia, and to the south, where we were headed, the sky grew slightly darker and the clouds began to hang on the mountains, obscuring the “aahhh” inspiring views of the many hollows and valleys which the Parkway would normally produce.  Soon, we found ourselves riding in a light mist on roads that glistened ominously beneath our tires.  The pace slowed and we rode cautiously to the end of the Skyline Parkway at Waynesboro, where the Blue Ridge Parkway begins.

A planned lunch stop in Waynesboro provided the opportunity to raise the question of whether to continue the ride as planned along the Blue Ridge for 70 more miles or take a lower, more direct, and, hopefully, drier road into Lynchburg.  On a ride like this, every rider has veto power over the route, and that power was exercised at lunch.  The Blue Ridge Parkway would have to wait until another ride.

After seven days and nearly 1200 miles on the road, the ride is beginning to take its toll on the aged bones of all the riders and a shortened ride today felt good to everyone. 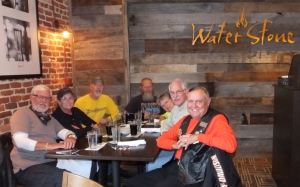 Dinner at the Waterstone.

When the trip had initially been planned, I had hoped to stay in a boutique hotel I found in Lynchburg, but the cost and availability of rooms at the Craddock-Terry Hotel precluded that option.  Still, I wanted to see what we were missing, so seven of us headed for dinner at the attached grill and brewery: Waterstone Fire Roasted Pizza.

Interior brick wall at the second floor brewery of the Waterstone.

The Waterstone and its brew room are contained in an 1888 vintage tobacco warehouse and the Craddock-Terry was formerly a shoe factory.  Both have been beautifully and carefully restored and are serving as an anchor to an impressive revitalization of historic downtown Lynchburg.

Tomorrow morning, the weather may be cool again, but rain isn’t currently in the forecast.  We’ll make a quick pilgrimage to Appomattox Courthouse where, for all intents and purposes, the great national civil strife came to anticlimactic ending, then continue our jaunt southward through Virginia and in to North Carolina as we head back to Florida.