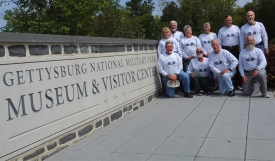 The campaign shirts drew a lot of attention at the Gettysburg Battlefield.

Today, nearly 1,000 miles into our trip, the Blue & Grey Civil War Motorcycle Campaign reached its northernmost point, just as Robert E. Lee and the Army of Northern Virginia did on July 1-3, 1863 when Union forces finally achieved a decisive victory against Confederate troops.  On those three bloody days 151 years ago, some 51,000 Americans became casualties of the Civil War that ravaged the country for four awful years..

About 1/4 of the 370 foot canvas inside the Cyclorama showing a view from Cemetery RRidge.

Dressed in our special order Blue & Grey Campaign shirts, our troop of ten spent the day at Gettysburg National Military Park trying to come to grips with the bloodiest battle in that great struggle.  Today was not a riding day, though of course we rode to the battlefield.  Today was less about motorcycles than about trying to understand how and why Americans–North and South–risked and sacrificed life and limb in an effort to shape the country’s future. 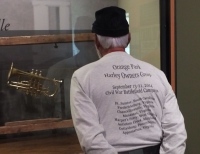 Ski looks at one of the thousands of artifacts in the museum.

This was the only battlefield on our trip that warranted a full-day at the site.  The morning was spent in the new (2008) visitor center watching a short interpretive movie, viewing the historic cyclorama of Pickett’s famous charge, and slowly working our way through the outstanding museum and the exhibits that told macro stories of the Civil War and the Battle of Gettysburg and micro stories of some of the individuals who, as President Lincoln declared in Gettysburg on November 19, 1863, gave their “last full measure of devotion.” 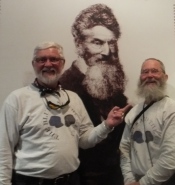 George points out my resemblance to my homie from Kansas: John Brown

The Cyclorama was both an interpretive device and a fascinating historical document in and of itself.  More than 40 feet tall and 370 feet wide, the circular Gettysburg Cyclorama was painted on canvas in 1884 by French artist Paul Phillippoteaux and has been a fixture at the Gettysburg battle site for decades.  It’s the largest painting on canvas in the United States and was painstakingly restored from 2005 to 2008. 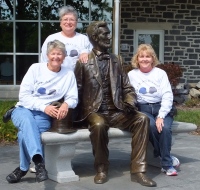 Abe was a real chick magnet.

On the first floor of the visitor’s center, the OPHOG crew wandered through the maze-like museum for several hours.  Seeing all the exhibits and reading all the text could easily take several days, but the professional presentations yielded a trove of information even during the short time we were there.  Starting with the background to the Civil War, the exhibits go through each day of the battle, then continue on to Lincoln’s Gettysburg Address, and the aftermath of the terrible scourge. 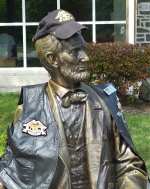 In honor of his saving the Union and securing liberty for all, we made Abe an Honorary HOG member.

Thanks to a suggestion from Lee, we took a bus tour with a knowledgable guide in the afternoon rather than ride the self-guided auto (motorcycle) tour.  It was a good suggestion, in part because we had an articulate, licensed guide who, in addition to delivering an informative narrative, also expertly fielded all the questions we could throw at him during the two-hour tour around the 4,000 acre park.  The expert guide covered the chronology of troop movements, the effort to restore the battlefield to its 1863 appearance, and the important points on the field where the most vigorous fighting occurred:  The railroad cut on Day 1; the peach orchard, wheat field, Devil’s Den, and Little Round  Top on Day 2; and the famous Pickett’s Charge across an open field and up Cemetery Ridge that marked the end of the battle and the High Water Mark for the Confederacy on Day 3.

Lee asks a question at one of the stops.

Among the stops we made during the day, two stand out as especially meaningful.  One allowed us to walk to the rocky summit of Little Round Top and survey the area below that held Devils Den, the wheat field and the peach orchard where many of the 20,000 casualties of the second day of fighting occurred.  Little Round Top, the guide indicated, may have been the key to the Union victory as General Warren rushed troops to defend the undefended hill against a Confederate attack.

A panoramic view from Little Round Top.

Terri and Ski follow the Guide in locating places on the battlefield.

The other stop allowed us an outstanding vantage point from which to see and understand why Pickett’s Charge was doomed to failure and the slaughter of many of the 12,000 troops who made that fateful march and charge across the field.  Reading books about battles is helpful to understanding the outcome, but seeing the terrain with artillery pieces in place is indispensable.

Mark and Ski walk past a “limber” on Cemetery Ridge.

At the end of the day, all the campaigners were ready to return to the hotel and dinner, but all also agreed that they would like to return to the battlefield for further exploration if they could.  It was, as expected, the most informative day of this nine-day campaign.

Tomorrow will be almost the opposite of today:  All motorcycle riding and no battlefield visits as we start our return trip south through the Shenandoah Valley and along the Blue Ridge Mountains.