I like my 2013 Ultra Classic and Marilyn’s 2007 Deluxe has been a good bike. Both have a plethora of gadgets, innovations, and enhancements that improve riding. But, as an historian, I think you sometimes have to look to the past to find classic ideas, creative thinking and lessons that offer valuable guideposts for the future.

Today I woke up in a building built in 1907 whose structure and style supply the Iron Horse Hotel with its fundamental character. Solid brick walls, wooden support beams measuring 16 inches square and rising 20 feet in the air, hardwood floors that have echoed the hurried footsteps of proletarian factory workers and upscale hotel guests for more than a century, giant fire doors that no longer serve their original function but have been turned into artistic elements in a new setting. The “new” is wonderful, but it’s impossible without the old.

Short of winning the lottery, I probably won’t stay at the Iron Horse again, though if I’m in Milwaukee I may stop by for a brew and to marvel at the strength of the building and the men and women who worked there when a nascent industrial America matured into a global economic powerhouse. But I’ll also raise a glass to the forward-thinking entrepreneurs who rescued the aging building and gave it new life. 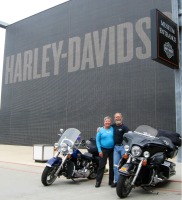 The real purpose of the side trip to Milwaukee was to visit the Harley Davidson Museum. Like the Iron Horse Hotel, Harley-Davidson also traces its history to the first decade of the 20th century when four young motorcycle enthusiasts built one motorcycle in 1903 and began a process that ultimately led to my Ultra Classic in 2013 (and about 300,000 more 2013 Harley-Davidsons as well). If you are ever near Milwaukee (and Florida is close enough) you should make it a point to visit the greatest collection of Harley-Davidsons in existence. More than 450 motorcycles line the museum spaces, including one from every year since 1906. The Motor Company had the amazing forethought in about 1915 to pull one completed bike off every production line every year, creating over the next 100 years the core of today’s museum.

But the museum is much more than a chronological display of motorcycles. It tells the story (all good museums, by the way, should tell a story) of the creation of an American icon, the value of perseverance and attention to detail, the cultural two-wheel threads woven into the American fabric and the men and women who thrive on the freedom found only on a motorcycle. If you go, don’t hurry through. Take your time. Appreciate the unfolding of the Motor Company’s past. Revel in the celebration of the building of an American company like no other.

We took about 3 hours to go through the museum today. It was my second trip to the museum, but for Marilyn it was a maiden voyage into Harley-Davidson history. She was impressed and glad to have made the visit. She, like any Harley rider who ponders the exhibits and marvels at the machines, has a greater appreciation for the motorcycle she rides.

At the urging of friends and former Milwaukeans Dan and Beth Symoniak, we took an extra hour to ride through an historic section of Milwaukee bordering Lake Michigan and lined with elegant mansions that reflected the growing wealth and power of an industrial midwest in the early years of the last century. Thanks to Dan and Beth. No doubt my slow pace on North Lake Street irritated some locals hurrying to get their Saturday chores done, but it was hard not to dawdle and dream of a different era. We thought about buying some property when we saw a “Garage Sale” sign but realized the garage wasn’t for sale and that’s about all we could have afforded so we rode on and headed for Madison.

In Madison we met our older daughter Heather and her family. Heather is a Methodist pastor who will be ordained tomorrow. She wanted us to be there for that and the timing worked out well. Then we’ll spend a few a days in Bloomer before heading west and north to Canada and Alaska.