Great Alaska Adventure: One of Those Days

I told Marilyn repeatedly before we began this journey it would be an “Adventure” not a “vacation.” Today was one of those days that proved how accurate my prediction was.

Once again, we suited up for rain before we left Murfreesboro and hit some moderately heavy rain by the time we got to Nashville. During morning rush hour. With road construction and fender benders adding additional challenges to the mix, we were still doing OK. But then our CB radios went out, sort of. Marilyn could hear me but I couldn’t hear her. But that didn’t last long and neither one of us could hear the other before we got out of Music City.

So, with trying to fix radios on the move, dodging construction barriers, and trying to see through a dirty face shield, I managed to miss my turn programmed into the GPS, staying on I-24 instead of I-65. About 30 miles later I finally made sense out of what my GPS was showing me.

Today’s important mid-ride destination was Jasper, Indiana, where we were going to have lunch with a couple guys I rode with in Colorado last summer. Not to worry. Even with adjusting the route to make up for the missed turn, I was still going to make it to Jasper by noon, which is when I said I would be there. But then my GPS started telling me my arrival time would be at 1 p.m. WHAT?!?!? In the hidden recesses of my muddled brain I vaguely remembered that Indiana had weird time zones and uncertain commitments to Daylight Savings Time. Sure enough, I had gone from Eastern Time to Central Time yesterday in Tennessee and appropriately reset various timepieces, but when I headed north and west to Indiana I was going back into Eastern Time. And the rain continued to fall. 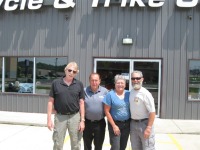 I called one of the guys I was supposed to meet and explained the situation and he sagely reminded me that “shit happens” and they would wait for us. So, promptly on time and an hour late we showed up at AJ Cycles and Trike Conversions where we thought we fixed the CB problem with a spare cord I carried but we actually didn’t solve the problem though we went to lunch thinking we had. Adventures are confusing sometimes.

Curt Trainer, one of our two lunch partners, told us about “The Dome” in French Lick, which was only 35 miles out of our way (each way) and said if we were this close we shouldn’t miss the Eighth Wonder of the World. So, after Marilyn and I gobbled a lunch of bratwurst and sauerkraut on a bagel, Scott Williams, our other Twisted Rider lunch partner led us French Lick to the see The Dome. Oh, but wait, there’s more to our adventure. 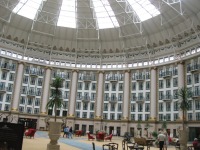 When we arrived at The Dome, we pulled up in a parking lot with tight spaces that all sloped severely right to left. Marilyn learned a moderately painful lesson in why a bike top heavy with packs and gear is hard to park on a slope which affects your ability to put your foot down on a solid surface. Yep, over she went. No serious harm done. Twisted ankle, a few bruises and relocated chrome. But we got her and the bike up and she soldiered on. I have to admit, The Dome was an interesting site and a good place to visit if you’re in the area. (For more information go to:West Baden Springs Hotel

Of course the side trip to The Dome added about two hours to an already long day, and we got to hotel this evening in Danville 12 adventured-filled hours after we left our hotel in Murfreesboro. Tired, finally dried out, still without bike-to-bike communication, and a little bruised. But it’s what Adventures are made of.

Marilyn’s enthusiasm for the trip may have temporarily waned. But I got to ride 400 miles on a motorcycle, see old friends and spend another day with my best friend. Sounds like an Adventure to me.

Tomorrow, a sweeping end run around Chicago (I’ll never ride in that city of crazies again) and on to Milwaukee and the Iron Horse Hotel.

7 responses to “Great Alaska Adventure: One of Those Days”