Typical of much of the country we rode through today.

If you’re looking for more pictures of Colorado’s geologic wonders or tourist Meccas, you can stop now.  There won’t be any in today’s blog.  Because today was not about sight-seeing.  It was about riding.  Motorcycle riding.  Of course we saw mountains.  I mean, we are in Colorado.   We saw beautiful countryside, rich farmland, national forests, the scars left by a forest fire and a llama ranch.  And we ended up in Breckenridge, which is a tourist destination of the highest order for summer hikers, winter skiers and shoppers of kitsch and “I Went to Breckenridge” t-shirts in all seasons

Typical of much of the country we rode through today.

Months ago, Kevin Rasmussen, one of the Twisted Riders, had carefully plotted today’s route, studying maps and scouring various forums for advice on which area roads would guarantee a challenging ride.  Good job, Kevin.  Without trying to re-create the route, suffice it to say that we rode a good mixture of US highways (50 and 285) State Highways (9) and several well-maintained hidden gem county roads that offered some of the best riding of the day.  From broad sweepers to 180 degree hairpins, these county roads provided just the challenge these skilled riders were looking for.

Not all the roads were twisties, of course, and when we ran on straight roads we generally cruised at the posted speed limit (well, maybe slightly above).  But once we hit the twisties all the riders knew the time had come for five or ten minutes of quick, throttle-twisting riding up, down, and around the mostly small mountains, leaning hard into the curves, straightening the bike back up, then racing along a short straight stretch before gently tapping the brakes and leaning hard again into the next curve.  To the Twisted Riders, this is “pace” riding and it’s why they ride.  When a mountain or valley had been conquered, we settled down to a more acceptable speed until the next challenge sent us careening through rock-wall-hugging curves once again.

Several of the Twisted Riders told me that today’s ride was more like their normal rides, which often occur in the mountains of West Virginia, Virginia and North Carolina.  For them, it’s generally the road and not the sights that bring them to an area to ride.  However, I must admit that they, riding almost effortlessly, found time to casually comment about the beauty of some of the mountains we passed or crystal clear streams we followed while I, on the other hand, with the pucker factor fully engaged, was focused intently on keeping the motorcycle in front of me in sight and staying in the 12 foot zone delineated by the white line to my right and the yellow line to my left.  Pace riding with the Twisted Riders is challenging, exhilarating and life affirming.  Hell, it’s just great fun.

Relying on a friend’s advice, Kevin took us to Zoka’s Restaurant and Bar in Pine, Colorado, far from the beaten path on Country Road 126 in Jefferson County. 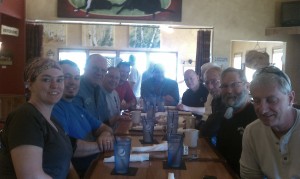 Run by a husband and wife and a professional chef, they make all their own sauces, smoke all of their own meats, and even brine their own corned beef for their outstanding Rueben sandwiches.  The service was attentive and quick and the owners gracious and helpful.  It was a perfect lunch stop on a great riding day.

The weather for the morning ride, which began at 8:30, was cloudy and cool but no rain, even though we could frequently see sheets of water shroud distant mountain peaks in sheets of gray-white mist.  After lunch, that changed, and the rain, which seemed to be all around us, kept coming closer and closer.  We thought for a while we might be able to carve a path through the isolated mountain storms to Breckenridge, but at a gas stop in Fairplay, only 25 miles from our destination, we were forced to once again climb into protective rain gear for the final ride up to and over the 11,500 foot Hoosier Pass.  The higher we climbed, the more intense the rainfall, and by the time we reached the summit, we had ridden through the hardest rain we had seen all week.  Shortly after cresting the pass, though, the rain slacked off and almost stopped and all we had to contend with was wet, slick hairpin turns as we descended 2,000 feet to the collection of t-shirt shops and sporting goods stores known as Breckenridge.

As we checked in at the old but comfortable Wayside Inn, there were smiles all round from Twisted Riders who knew they had done what they love to do best:  Ride hard with good friends.

Tomorrow:  An assault on Mt. Evans should be in the cards.