How much fun can you squeeze into 11 hours of motorcycle riding?  A lot.  Even when several of those hours include riding in the rain at 47 degrees along a mountain pass where the outside edge of the road on which a white line should be painted has crumbled into the canyon 5oo feet below.

Yes, it was 11 hours plus a few minutes from the time we pulled out of our Grand Junction motel until we rolled in to the motel parking lot in Salida, still exhilarated from our ascent and decent of Monarch Pass (elevation 11, 300 feet) on US highway 50.  I’m not sure if it was because we were anxious to get to Salida or everyone just wanted a chance to let it out after proceeding cautiously in the rain earlier, but the summit ride was done at “pace” (i.e. considerably faster than the local gendarmes would allow if they had witnessed our nefarious motoring activity).

Back to the beginning.  Of the day.  The first 60 miles was an easy ride down a relatively straight US highway 50 flanked by dun colored mesas on our right and gray mountains on our left.  This was ranching country in the valley between the two geologic uplifts and cattle, horses, and the occasional cowboy and cowgirl watched us with little interest as we motored steadily south. 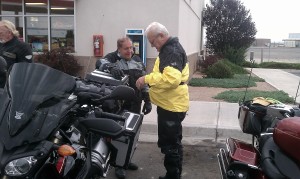 Gearing up for rain

As we passed through Delta again and on to Montrose, the gray skies under which we had been riding were turning darker and the occasional raindrop was becoming more common.  We dug into our packs and attired ourselves in rain gear as a precaution.  Good thing, because we were headed south on the “Million Dollar Highway” (aka US  Route 550) and precautions there are a must.

By the time we got to the novel town of Ourey, we had been in and out of light rain several times, so we stopped to take a look around and to prepare ourselves for the assault on the looming mountains.  Boasting 1,000 happy citizens, Ourey is an interesting little town with lots of shops, including candy stores which are open early in the morning and which sell tasty hard candy and delicious almond and pistachio chocolate covered toffee which sticks to your teeth and makes you wish you had a good cup of strong coffee to wash it down and melt it off your teeth and warm you up a little bit if its 52 degrees and sprinkling.  But I digress; this is about motorcyle riding.

Immediately on leaving Ourey on US Route 550 and climbing several hundred feet, an awesome view of the town and the surrounding colorful crags offers itself, but we could only glance for a second or two because the rapidly rising and twisting highway demanded our full attention.  Ouray sits at about 7,800 feet and we were about to climb more than 3,000 feet to the Red Mountain Pass over a road that requires constant attention from highway maintenance crews. The Million Dollar Highway has an inopportune  habit of collapsing in chunks large and small to the valley below.  The mountain on which the road was constructed responds like all things to the law of gravity and the second law of thermodynamics and has a tendency to seek a lower level, even if there is a highway in the way.  Indeed, as we rode through, two separate road crews were responding to the collapsing  road, shoring it up, even if only temporarily.

The view from the Million Dollar Highway (named for its cost per mile), for those who chose to look at something other than the road, was stupendous.   Huge, soaring, steep-sided, red and salmon-colored mountains, flush with verdant conifers, rise above and a rushing, cascading, russet-colored stream flows below.  It’s views like this that bring flatlanders like us to Colorado and that cause us to say repeatedly: “Holy crap.  Did you see that?  Wow!”

This picture of one the Red Mountains was ripped off from another website.

Red Mountain Pass is named for several red mountains (duh!) that dominate the skyline and which were and are the site of mining activity due to their high iron content.  Even in the dull light of a rainy August morning, the red mountains  make us, for a second, take our eyes off the road and wonder if we’re seeing something unnatural in nature.  They were, in short, hypnotically beautiful.  But we see them only for a second because the race down the other side of the pass toward Silverton is on and the 10 mph and 15 mph wet hairpin turns on the mountain sides once again focus our attention on the ride.  Chasing down the mountain, we emerged, finally, in Silverton, frazzled yet stimulated and ready for lunch.

Lunch is always a big part of each day’s ride. Today’s location had been visited recently by Guy Fiere of Drive-ins, Diners and Dives fame and seemed like a good bet for good food.  Thee Pitts Again BBQ joint’s bright pink exterior and it’s equally bright pink delivery truck caught our eye and the choice was not regretted by anyone.  Great food, and great service from 11-year old “Blaze” who’s probably the hardest working 11-year old in Silverton.  We didn’t ask why he wasn’t in school as he hustled to and from the kitchen bringing trays of barbecue, chili and cornbread.

With barbecue sauce dripping from our thankful lips, we dressed again in our cold-weather and rain gear for the ride back north on Route 550 in the 47 degree light rain.  The trip back was, of course, similar to the trip over.  Great views for those who cared and wet, slick roads for everyone.  This trip through Ouray resulted in only a 60-second stop for a brief costume change and then back to Montrose and Highway 50.

Fortunately, as went north the rain abated and the sun tried desperately and sometimes successfully to break through the hoovering clouds to warm us up.  I say fortunately because the next leg of our trip involved the Black Canyon of the Gunnison, which we probably would have skipped if the chilling precipitation had continued. 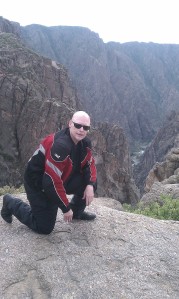 Brad Dykes, my Twisted Rider roommate, atop the Black Canyon of the Gunnison

The Black Canyon of the Gunnison, about 20 miles east and north of Montrose, is a sheer-walled canyon carved by the Gunnison River over tens of millions of years as the geology of the area went through dramatic changes.  Most significant for tourists such as us, was the chance to view the largest cliff face in Colorado at 2,300 feet.  As the National Park Service interpretive sign at the site informed us, you could stack two Empire State Buildings in the canyon and they still wouldn’t reach the top of the canyon.  We toured the top of the canyon, breathlessly taking in several breath-taking views, and then took another road (less traveled?) which led to the bottom of the canyon in a switch-back filled, three mile decent that, as the WARNING signs said, had a 16 percent grade.  Next time you’re on a road and a sign warns of a 7 or 8 or 9 percent grade, you may get a sense of how steep this road was.  All of crept down the road in first or second gear and the flash of brake lights was commonplace on the trip down.  The trip up the canyon road was a little more fun as we put our bikes through their paces on a tough course.

Safely out of the canyon, we headed for Salida. You’ve already read the highlight of that Monarch Pass leg in the second paragraph of today’s blog, so I’m done.  And tired.

Tomorrow:  Hmmm.  Let’s see.  How about more mountain roads with an ending in Breckenridge.