Kick stands up at 7:30 this morning in Rocky Mount and kick stands down at 5:15 this afternoon in Ocracoke on the Outer Banks bookended a full day. Ride leader Steve and event planner Ruth kept the Great Adventure train on the tracks and on schedule.

Although we only covered 237 miles today, the ride through North Carolina farm country in the morning and the flat coastal plains provided a stark contrast to the mountain roads of a few days earlier. Our first stop after crossing over to the barrier islands was at the Wright Brothers’ Memorial and museum at Kill Devil Hills. Interesting to note that the Wright Brothers started building flying

machines at the same the Harley-Davidson Motor Company began to produce motorcycles. We took in some of the museum exhibits, stood on the spot where the first manned flight left the ground, and played around on a full-sized sculpture of the original plane.

Riding on the Outer Banks doesn’t offer the challenges of mountain twisties, but cruising along at a leisurely pace provided a chance to enjoy the ocean scenery. The leisurely pace was sometimes too leisurely today thanks to four episodes of throttle failure on my bike that left us limping along at 20 mph until I could shut off the engine, reset the computer and regain control of the throttle. Sure hope it keeps working well enough to get me back to Orange Park. 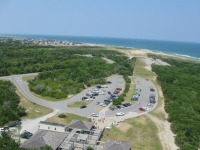 Ruth’s plan from the beginning was to visit lighthouses and we managed to get to three of them, including the Cape Hatteras lighthouse. Five of us climbed the 287 stairs to the top and waved at Marilyn who didn’t see us. Nice view from the top. We were able to see where the light house had been moved hundreds of yards in 1999 from its original position to its current location. One hell of an engineering feat.

The ride ended with a 40 minute ferry ride to Ocracoke Island. Hopefully that short ride prepared us for the two and a half hour ferry ride tomorrow back to the mainland where we begin the ride to Wilmington.