Everyone knew the stay in Maggie Valley would be brief, but the two-day stint at Saving Grace made leaving the valley that much harder. It’s easy to see why so many people have made the Valley their home away from home. The trip down the mountain from the cabin with loaded bikes was considerably easier than our first excursion going the other direction.

We retraced our route on US 276 that brought us to the Valley two days earlier through Pisgah National Forest and over the mountains. Starting any day on 30 miles of mountain roads will always bring a smile to my fuzzy face. At Jack’s suggestion we visited Looking Glass Falls. Good call Jack. We were there early enough to have the place to ourselves and enjoy the falls undisturbed. 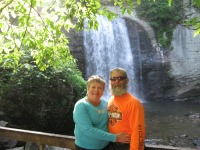 Because today’s ride was the longest of the trip (385 miles) we had to mix in some interstate riding with mountain and country roads. Despite our best efforts to avoid the quick turns and u-turns that marked yesterday’s ride, today’s adventure included the most egregious misstep of the 2012 Great Adventure. But it wasn’t the fault of the ubiquitous GPS. No, today’s screw-up rests solely on the shoulders of the ride leader. That would be me. Expecting a highway split that would send us east, I carefully positioned the group in the left hand lane of Interstate 26. But evil traffic engineers had opted for a right lane exit and a fly over spanning the Interstate. Marilyn and I managed the quick lane change to execute the flyover, but the rest of the group continued sailing southward to South Carolina. They reversed directions in another state entirely. Marilyn and I only enjoyed 20 minutes of quality alone time on the side of the highway before the missing members of the flock returned to the fold. Mea culpa. Mea culpa. Mea maxima culpa.

Group riding on interstate highways through large cities tests riding skills and one’s faith in his (or her) fellow man (or woman). Charlotte and Raleigh today tested both. For some reason, the natives seem to think the asphalt testing grounds belong exclusively to them, trying to enforce ownership by occupying the same spaces we intended to use. But we managed to get through urban battlefields and ten hours after we left Maggie Valley we reined in our steel steeds at the Hampton Inn in Rocky Mount. 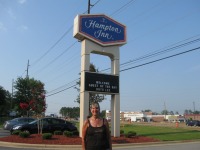 To our great delight, the good folks at the Hampton had declared on their marquee that today’s guest of the day was our own Ruth Lee. We have, as a result, treated her since our arrival as the princess that she is.