We came to Alaska to fish.  And today we fished.  No, let me try that again.

TODAY WE FISHED.  Much better.

Our GAFA itinerary called for a 5 a.m. departure from the Stewart’s Landing boat ramp in Soldotna, so we set our alarms for 3:30 to ensure a timely arrival.  Both of us were as wide awake at 3 a.m. as kids on Christmas morning, and we had plenty of time for coffee and Moose Is Loose delectable pastries to get the day started right.  We left our Stillwaters chalet in the POS Focus a little before 4:30 and arrived at the boat ramp at 4:40 a.m.  The gate  to the privately owned ramp was locked and no one else was there.  So we waited.  About 10 minutes later the owner of the property emerged from her little house next to the gate, unlocked the chain that impeded our progress to the boat ramp and parking area, and collected our $10 parking fee.  Several sets of headlights pierced the softly glowing dawn behind us as we headed down the drive to the ramp.  Fishing tourists like ourselves piled out of cars and three pickups towing boats added to the growing crowd.  We donned our chest waders (yes, my newly purchased non-felt soled Caddis waders), gathered our supplies for the day, and stood ready to fish.

The first pickup in line and the first boat in the water belonged to EZ Limit Guide Service and both were piloted by our guide for the day, Kenny.  During the non-fishing season, Kenny is a high school science teacher, and though he has fished in Alaska for many years, this is his first summer as a guide. We introduced ourselves to today’s fishing partners, Minnesotans Julie and Ryan, listened half-heartedly to the obligatory safety instructions from Kenny (life jackets, fire extinguisher, man overboard, etc.) and backed slowly into the smoothly flowing Kenai River, Alaska’s superhighway for millions of salmon swimming inland to spawn and die.

We headed upstream to a spot Kenny had picked out, but by the time we arrived boats that launched with their fishing crews from other ramps at 4:30 already lined the bank.  No problem Kenny said.   Other places on the river were just good also, so we reversed course and pointed the bow downstream for about 10 minutes until we came to a less crowded shore line.

Kenny prepared our fly rods, gave us quick but professional three-minute instructions on how to catch sockeye salmon using EZ Limits’ outstanding tackle, and we climbed out of the anchored boat into the water that had started its journey to the sea in distant glaciers.

I know that many blog followers come to hdriderblog not for the literary gems that glimmer on its pages but for the pictures.  OK.  So here’s what you really came for, at the end of which I’ll continue my narrative until my glass no longer contains Jack Daniels. 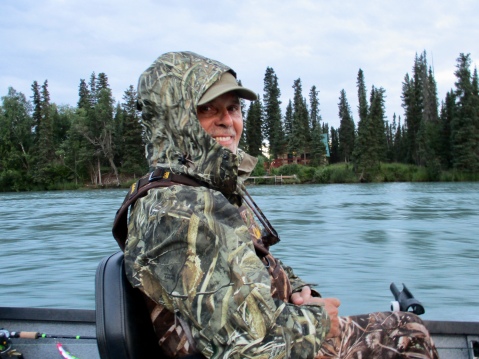 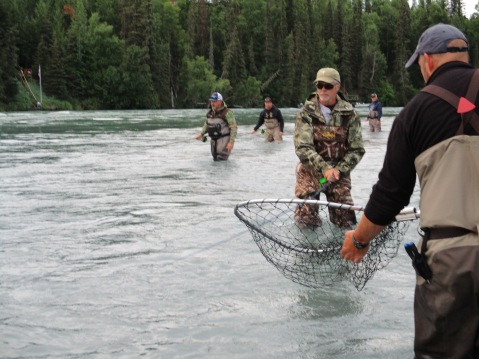 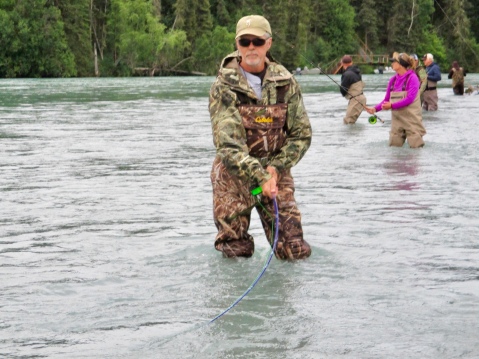 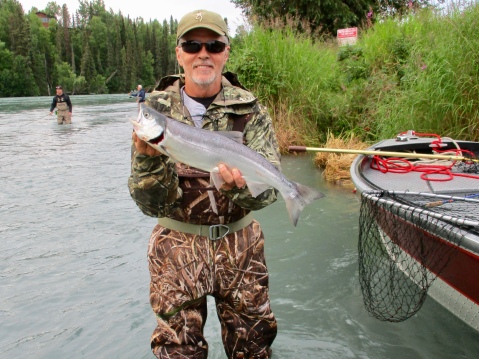 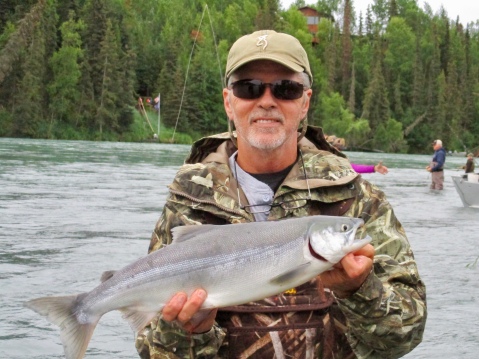 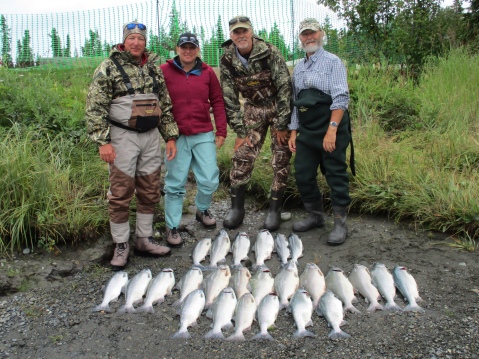 I took many more photos during today’s fishing frolic, but you get the picture.

While fishing at our first location, Kenny got a call from another guide who let him know that  a spot had opened up at his first choice, so we climbed back into the boat and motored upstream again.  That spot at a bend in the river was where we all caught our single-fish limit of Sockeye, aka Red Salmon.  A few weeks ago the limit had been three Sockeye per person per day, but the run this year is not as plentiful as in the past, so Game and Fish reduced the limit to one fish per person per day.

John and I were both surprised at the odd method used to catch Sockeye on the Kenai.  Apparently this species of salmon is so intently focused on spawning and dying that they  don’t bother to eat as they swim upstream.  Consequently, using any kind of bait would be pointless. Over the years, though, Alaska anglers figured out that Reds swim upstream with the mouths open so water can run over their gills and keep them oxygenated.  So, we learned, the best way to catch them is to drag an unbaited hook across their open mouth and snag them in the jaw.  It’s known as the “Kenai Flip.”  But if you snag one anywhere but the mouth, that’s known as “foul hook” and you have to release any fish caught that way.  All of us “foul hooked” a salmon today and all of us dutifully released said fish to continue its final journey.

So, you may be asking, if we could only keep one sockeye each, why are there so many fish laying on the beach in the picture above?  Because the Pink Salmon (aka Humpies) are in great abundance, which allows everyone with an Alaska Fishing License to catch a total of six salmon per day.  Hence, we could each catch one Sockeye and five Pinks.  Or, as John discovered, you can also catch up to two Silver (aka Coho) Salmon each day as part of your six-fish limit.  John was the only one in our group who hit the trifecta today:  Sockeye, Silver and Pink, and the strike and ensuing battle for the Silver was the highlight of his day.  “Phenomenal” I believe he said.

All of us caught our limits by 10:30 and Kenny parked the craft in the middle of the river so he could fillet all the fish in the boat’s fish well for us to take home.  While he worked diligently with his filleting knife, the rest of us continued to fish and in the hour and a half it took him to fillet the fish, we caught (and released) about 18 more Pinks using spinner baits.

Each of our two-person groups kept the fish we caught today and delivered them to a fish processor to be packaged and flash frozen and to be picked up on the final day of our Alaska Adventures.  John and I ended up with nearly 40 pounds of filleted fish which we divvied up between us.

Today’s weather was perfect.  Today’s guide service was outstanding.  Today’s fishing partners were friendly, helpful and a pleasure to fish with.  And today’s fishing was . . .well it was about as much fun as anyone had a right to expect and a great start to the GAFA.

Tomorrow, weather permitting (it’s supposed to rain all day), we’ll fly in a small plane across Cook Inlet and land in Bachatna Creek in search of a three-fish (?) limit of Silver (Coho) Salmon.  At least we get to sleep in since we don’t have to be at the Alaska West airport until 7:30 a.m.  But we’ll probably wake up at 3 a.m. again, anxious to see what the GAFA has in store for us.