The Great Alaska Fishing Adventure (aka GAFA) has officially begun.  John and I left his farm in Walterboro, South Carolina at 8:30 this morning (actually yesterday morning, but more about that later) and headed for Savannah, GA, where we caught a short flight to Atlanta where we caught a much longer flight to Anchorage.  As I sit here in Soldotna on the beautiful Kenai Peninsula sipping a sweaty glass of Jack Daniels, it is now 11 p.m.  and it’s still light outside.   But if it’s 11 p.m. here it’s 3 a.m. where John and I started this morning and I only picked up about an hour of sleep on the plane.  Consequently, you may blame any literary blunders in this first post either on the Jack or on the 21 hour day I’m working on.

Since we spent most of the day driving to airports, sitting in airports, flying in big shiny planes or driving three hours from our final airport to our current lodgings, there isn’t much to write about.  Nevertheless, the thousands (hundreds?) (tens?) of fans of hdriderblog deserve something so here’s my offering.

At the Savannah Airport I noticed a young man wearing Delta gear who reminded me a lot of Doogie Howser from the 1990s TV show featuring a teen-aged surgeon.  But then he walked down the jetway to our plane and I realized he was one of the crew.  Maybe a trainee, I thought.   But when the Captain made his introductory welcome-aboard comments, he also noted that Doogie, the first officer, was going to be flying the plane to Atlanta.  But just as TV Doogie worked through his weekly crisis, so too did flying Doogie and we landed safely, on time, at Atlanta’s Hartsfield-Jackon International Airport.

As we went from one concourse to another, John and I both commented on how big that airport is.  I looked up some statistics to pad what I expect to be a rather bland blog posting.  The Atlanta airport is the busiest in the world, serving more than 250,000 passengers a day.  More than 60,000 people work at the airport, making it the largest employer in Georgia with 12 times more employees than my current city of residence (Soldotna) has people (5,000).  It would take more than 50 cities the size of Soldotna to fill the planes that fly out of  Hartsfield-Jackson International Airport every day.

We sat nearly three hours at Gate A19 in Concourse A  waiting for our flight to Alaska since even our first-class tickets didn’t entitle us to the Sky Miles lounge reserved for the Rich and Famous.  Watching the people hurry by on their multiple ways to somewhere else was like watching the world hurriedly rushing by.  All colors.  All shapes.  All ages.  All cultures.  I wouldn’t want to do it everyday, but it was interesting to be immersed in the traveling United Nations.

Because John is taller than average, he prefers the extra leg room afforded to first-class passengers to biting on his knees in coach.  So, for only the second time in my flying life, I flew first class.  I have to admit, it does have its perks.   Hot food, lots of munchies, wider seats, and, of course, Jack Daniels on demand.  I only demanded three during the flight.  But at nearly eight hours in the air, it was a long flight.  I read a little history.  I tried with little success to nap. The Jack helped make the flight tolerable.

My previous three trips to Alaska all occurred on two wheels, so the view from 40,000 feet was a new experience.  Most of the flight we were looking down on various hues of square farm fields in Minnesota, North Dakota, Saskatchewan, and Alberta.  But as we passed over  British Columbia, the Yukon Territory and into Alaska air space, I got an entirely different view of the flowing glaciers and snow-clad mountains I had seen before at ground level.  The window on the plane wouldn’t roll down, so I had to shoot pictures through several layers of plexiglass distortion.  Still, they offer a hint of the awe-inspiring sight of the soaring mountains of the northern Rockies and the Alaska Range.  For the sheer adventure, I still prefer two wheels, but the view from on high ranks near the top of “incredible scenes.” 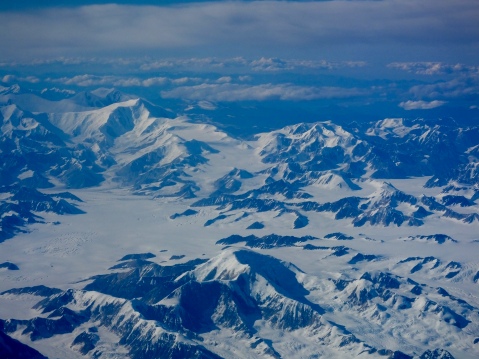 As we landed at the Anchorage Airport, we were greeted by a galloping cow moose running parallel to our runway.  If only she had been carrying a sign that said “Welcome Dennis and John.”  Another perk of first class was being first off the plane and first to watch our luggage tumble down the revolving baggage carousel which I grabbed while John saw to our rental Ford Focus POS that will transport us for the next week.  14 hours after we left John’s house, we still had a three-hour drive ahead of us as we skirted Turnagin Arm and drove across the Kenai Peninsula to our lodging at the Stillwater Chalet in Soldotna, which has a really nice view from the back deck.