Day 13: Another Day in Vienna, Another Sachertorte

After yesterday’s full day in Vienna, I needed a day with a little less activity and a little slower pace.  Consequently, after writing and posting yesterday’s blog, I relaxed a little this morning, had a (relatively) light lunch aboard ship, then jumped on the subway for a 15 minute ride to the center of Old Town again.

We visited the same area we spent part of yesterday in, but at a much more relaxed pace.  I noted a few days ago that I would drink a little less wine and a little more Viennese coffee these last two days.  At least I managed the latter. 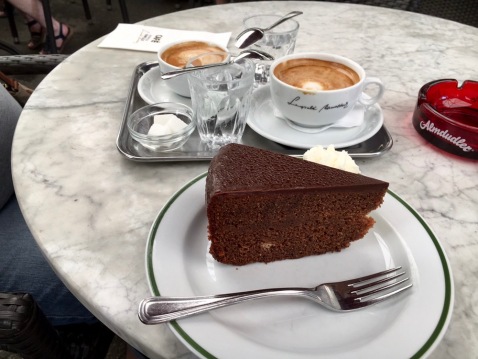 In addition to strolling leisurely through the crowded Saturday shopping district, looking again in the windows at mammon I will never have, I visited two more local landmarks that I’d read about and had put on my Vienna bucket list.  Neither one was a castle or a fortress or a palace.  Rather, they were the sites of local social interaction and relaxation.  The first was Cafe Hawelka, a traditional Viennese coffee house and one famous as the gathering place for struggling and upward bound artists, who often paid their tabs in artwork rather than coin.  Once again, I ordered Grosser Brauner and Sachertorte and once again I was not disappointed.

I had read that not only is their a closely guarded recipe for each coffee house’s liquid brew and its torte, but there is a standard and accepted way of serving it.  The photo below depicts that.  The coffee should be served on a silver platter, with a small glass of water with a spoon upside down on the top, and extra sugar.  That’s exactly the way it came.  And the Sachertorte was as good at Cafe Hawelka as it was at Deml’s.

Sandwich spreads and bier at Trzesniewski’s

The second stop on my culinary tour of the Innere Stadt was Trzeniewski’s, a unique cafe that serves open faced sandwiches on rye bread made up of more thanks 50 different spreads.  I opted for carrot and cream cheese, pureed tomato and red pepper.  With a very small beer to wash each one down, it was the perfect mid-day snack and very affordable.  While tourists visit Trzeniewski’s, most of their trade is probably conducted with locals who work in the inner city.  It was a brief visit, but a real treat.

Back at the ship, I enjoyed a 45 minute lecture on Austrian history from a professor at Vienna University.  Entertaining and informative, the talk covered more than 1000 years in less than an hour, focusing on the Hapsburg Dynasty and the dissolution of that dynasty in the 20th century following WWI and WWII.  Very nice.

We are now sailing down the Danube again on our way to a wake up call in Budapest. 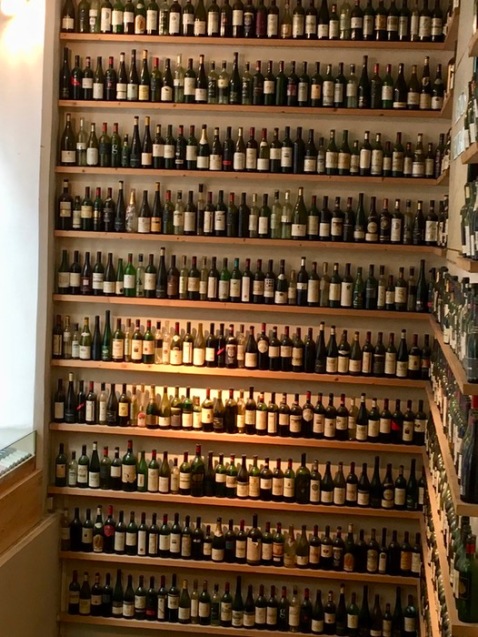 A picture of my stateroom and some of my souvenirs.

For those who tired of castles, fortresses, cathedrals and palaces.  These two lovelies were at Cafe Hawalka and had their waiter take their picture.  So I joined in.  Then they ran away from the old man with fuzzy face.

A baby church, only 150 years old.  Just across the street from our ship.

One response to “Day 13: Another Day in Vienna, Another Sachertorte”