About mid-morning today we left the 106-mile long Rhine-Main-Danube canal and entered the Danube River.  Along the way, we went through 27 locks, the highest of which was more than 82 feet, and near the middle of the canal we reached the highest point on earth where ocean-going vessels can go.  The canal took more than 30 years to build and makes it possible for barges and ships like ours to go from the Black Sea to the North Sea across central Europe.

One of 26 locks, this one on the downhill side headed to the Danube

For the next seven days we will sail on the Danube, leaving Germany tomorrow night and entering Austria.  The final two days will take us to Hungary.

The stone tower was part of the Roman fortification and built around 173 AD.  The upper room was added later and is now the honeymoon suite of a hotel inside the former Bishop’s Residence.  It represents a nice shift from making war to making love.

Regensburg, our port stop today was another reminder of the length of European history.  The area was probably settled nearly 2,000 years ago and in the first century AD it was the site of the second largest Roman settlement in Germany, hosting Castra Regina (Fortress by the River Regen) and some 6,000 Roman Legionnaires.  The city still shows reminders of Roman architecture including walls, towers and the main gate to the fortress.

The Danube River from the Bridge into Regensberg.

It was another of those fortunate German cities, unlike Nurnberg, that largely avoided destruction in World War II and still boasts buildings built in the 10th, 11th and 12th century, including the city hall, St. Peters Cathedral, the bishop’s residence and hundreds of shops and houses.  We walked into the city across a bridge over the Danube River built in 1135-1146, though after only 900 years, it’s already beginning to show its age and is undergoing some repairs.

In addition to the City Hall (and the nearby Ratskeller) and the Bishop’s residence, the primary historical focus of the town is St. Peter’s Cathedral, begun in the 13th century and finally completed in the late 19th century when two soaring spires were added and at nearly 350’ tall are among the highest in Germany.  We took a few minutes to step inside the massive cathedral and were confronted with brilliant stained glass windows dating from the 14th century and a nave which rose more than 100’ above us.  Beautiful. 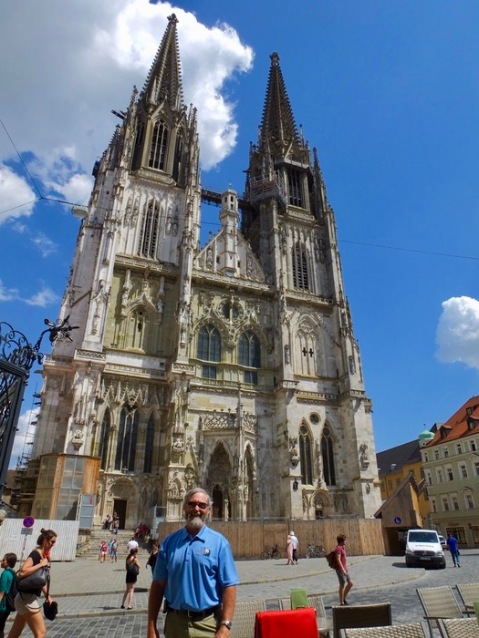 While not as impressive as the cathedral or city hall or the bishop’s residence, one of the high points of today’s walk through Regensburg was a stop for beer and sausages at the Sausage Kitchen (Historische Wurstküche zu Regensburg) which has been feeding workers and residents at the site since the bridge was built in 1135-1146.  The same family has been operating the current restaurant since 1803 and has grilled sausages over charcoal since that time.  I enjoyed a plate of sausages and sauerkraut washed down with a nice dark beer delivered by a surly waiter.

Once again, the WiFi connection is slow and sometimes fails completely.  I’m hopeful I can post this tonight, but if the midnight hour comes and it’s not up, it will have to wait until tomorrow.  All this walking, eating, drinking and other tourist activities is taking its toll and there are more castles, cathedrals and concerts ahead of me.  But I’m not complaining.  This has been a great trip so far. 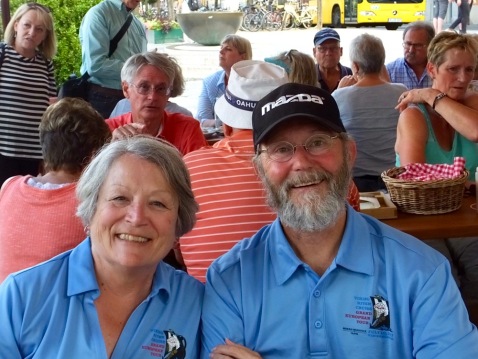 Marilyn is flanked by Carl, the ship’s Program Director, and Brigitta, today’s guide.

Flowers were everywhere, but we learned they had been banned from city windows before the 1980s.  Weird. 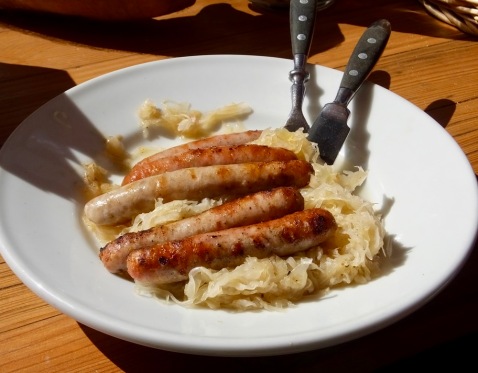