Day 7: Bamberg and a New Career 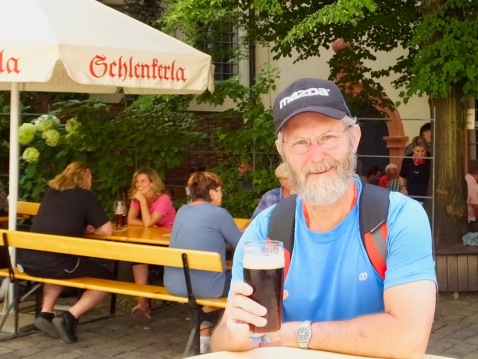 Enjoying Rauchbier or “Smoked Beer” in a classic Bamburg brauhaus.

A good day should include several new experiences.  Using that criteria, today was a good day.

While we cruised on the Main River to our next port of call–Bamberg–in Franconia/Bavaria/Germany,  Carl the Viking River Cruise Program Director thought we should have the opportunity to be entertained if we wanted to do something other than watch the river.  So he brought aboard a sixth-generation glass blower from Wertheim, a small town near Miltenberg, who happens to be one of the best glass artists in the world, to give a demonstration of his art.  In the course of his demonstration he asked for a volunteer to show how “easy” glass blowing is.  Of course, I volunteered when the others in the ship’s lounge hesitated to step forward. 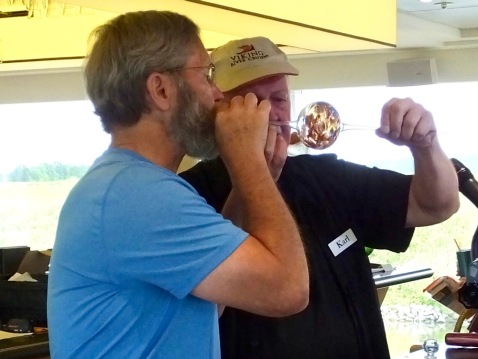 Karl turns me into a master glass blower.

Karl Ittig, a showman as well as a world-class glass blower/artist, started me off with a shot of Jaegermiester, which he said was essential for good glass blowing.  The Jaeger went down smooth.  After sharing shots, we moved on to the main course–glass blowing.  Karl heated the special, hard Pyrex glass tube and gave it to me to blow into, with the unnecessary warning not to inhale.  Working together, Karl and I produced a beautiful glass ball that he gave me when the demonstration ended.  It will be one of the best souvenirs of this trip. 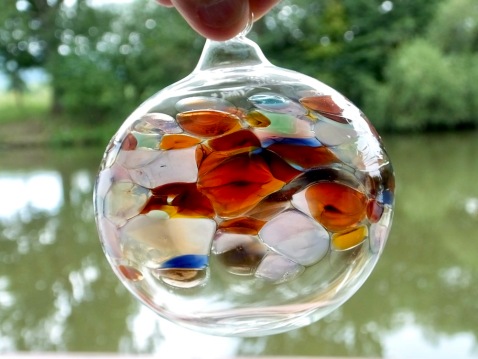 After docking in Bamberg and once again eating way too much at lunch, we headed into the city, another of the lucky towns to escape the wrath of allied bombers, leaving intact public buildings, shops and cathedrals that date back to the 11th century.  Today happened to be a festival day and the city was crowded with festival goers and various magicians and other performers.  Normally on Sunday, the city streets would have been relatively quiet and we wouldn’t have had to compete for sidewalk space with hordes of families and other celebrants.  But it was nice to see how the populace enjoys themselves on a special day. 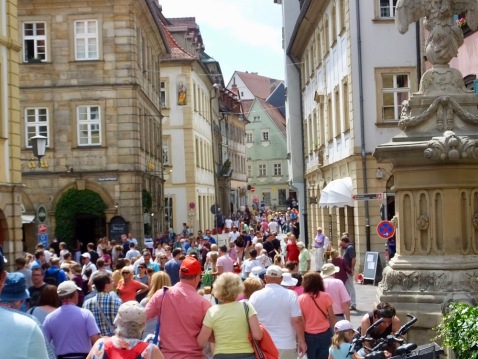 Our tour guide, Alex(andra), walked us on a one-hour tour focused mostly on old Bamburg.  The city had it’s start sometime before the 12th century and was intentionally founded with seven churches on seven hills to mimic Rome, the heart of the Holy Roman Empire.  Because it was a Sunday and the main cathedral (circa 1020) was in use, we couldn’t go inside as a group, but from the outside we knew it was an impressive structure.  We passed by the Old City Hall, decorated with colorful murals and intentionally build in the middle of a river so the town wouldn’t have to pay taxes to the local bishop.  The various cobblestone-covered plazas were enormous and even with all the crowds in town, many still seemed to be mostly empty.  Behind one of the state buildings which held the state library we enjoyed a rose garden filled with flowers and statues and providing a tremendous view of the city spread out below. 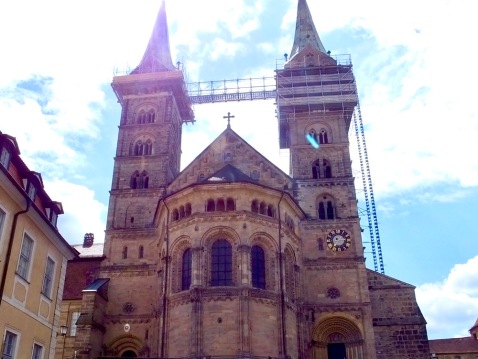 When the tour ended and we said auf weidershen to Alex, I set course for the Schlenkela brewpub to try the talk of the town:  Rauchbier or smoked beer.  By cooking malt over an open flame, Bamburg breweries impart a smoky, bacon-like flavor to their dark beer.  We had been warned it wasn’t to everyone’s taste, but it definitely suited mine.  Joining the locals, I went to the window inside the tavern, ordered ein rauchbier, put a deposit on my glass, and went outside to enjoy the sunny afternoon.  The beer garden outside was nearly full, but we found a small table at which we could stand and watch Bambergians (?) drinking their smoke beer, eating saubraten and enjoying the day. 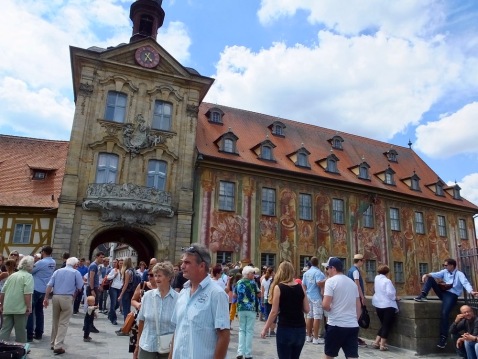 After a couple leisurely stops along the way at shops and a market place, we headed back to the ship, ending another great day with another great meal of regional specialities prepared by the ship’s executive chef.

Tomorrow we dock at Nurmburg, site of the post-WWII war crimes trials where Nazi leaders were brought to justice and go off for another tour. 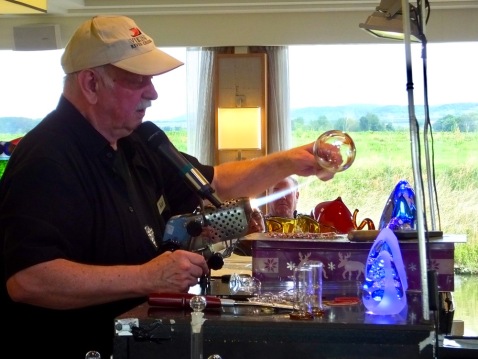 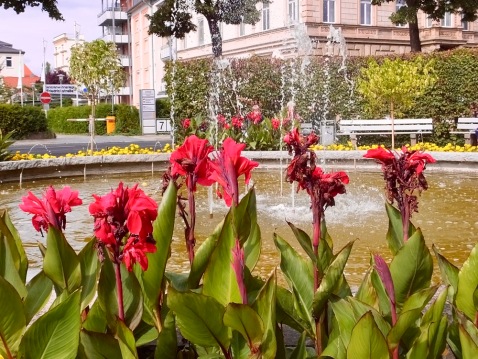 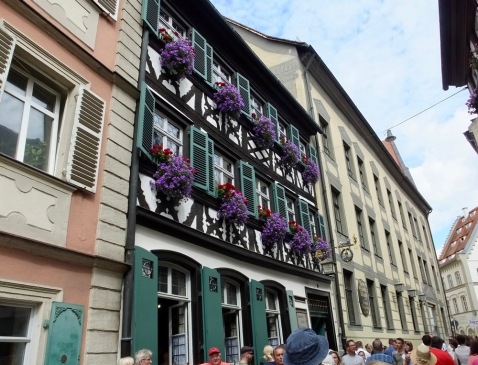 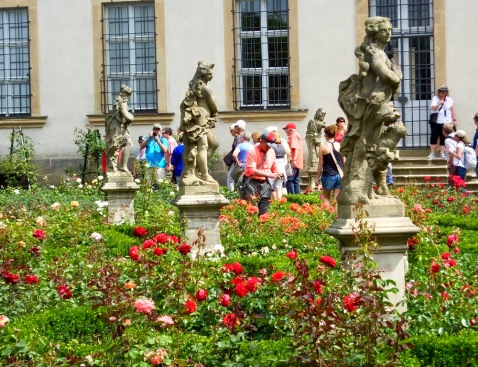 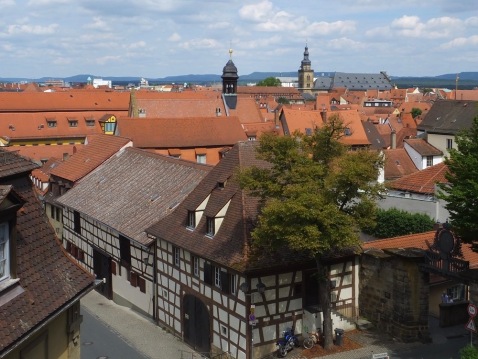 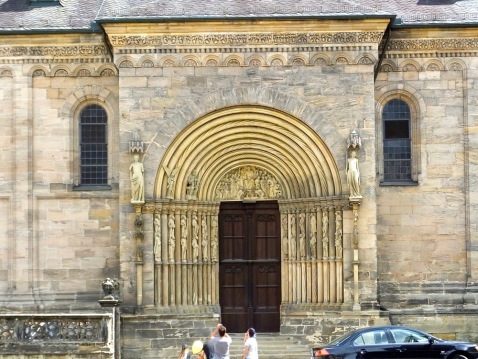 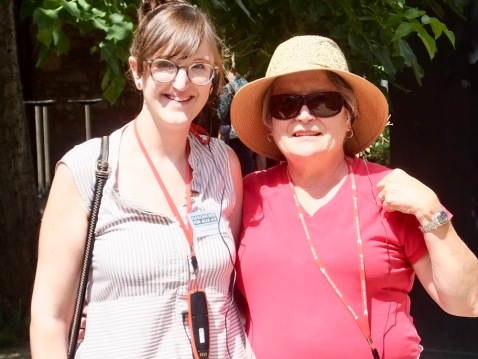 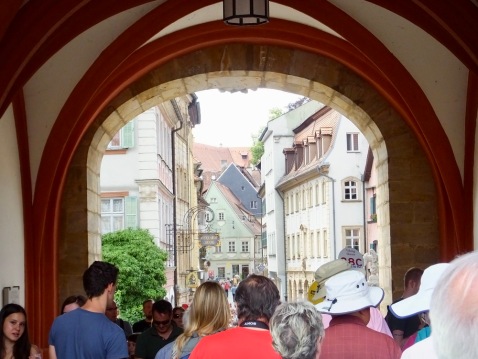 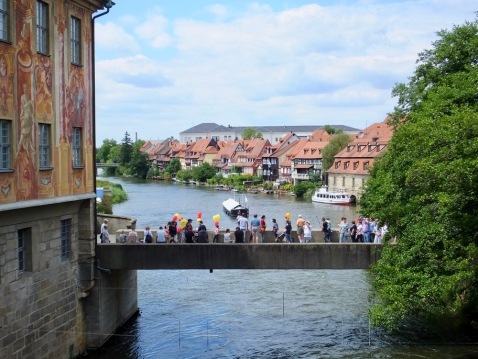 Bamberg is also known by some as “Little Venice.”

3 responses to “Day 7: Bamberg and a New Career”