Four weeks after I crossed the border into Canada, I returned again to the Lower 48 with a filthy motorcycle, a nearly empty wallet, an SD card full of digital images, a blog that will no doubt become another best selling book and memories of people, places and events that may dim but will never go away.  Alaska Redux, nearing its conclusion, has been another great adventure. 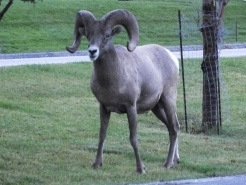 Today’s route mostly retraced roads I took last year on the Great Rocky Mountain Adventure, but I wanted to show Mark one amazing place in Alberta.  We left Radium Hot Springs after saying our goodbyes to our Big Horn Sheep friends who patrol the streets there.  Chilly temperatures at or below 50 degrees required we once again don heated gear and windbreakers until the sun rose a little higher in the bright blue sky. 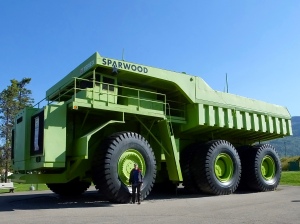 On the way to Frank Slide in Crowsnest Pass, we passed by the “The World’s Biggest Truck” I made famous on last year’s blog, so I thought I’d recreate the scene for this year’s blog with Mark standing where I stood.  It’s still a very big truck and Mark, though impressed, decided not to buy it for mud bogging in Florida.  We enjoyed the scenery through Crowsnest  Pass on Crowsnest Highway, past Crowsnest Creek, Crowsnest River, Crowsnest Mountain and various Crowsnest business establishments.  It would be our last close-up look at the mountains we’ve enjoyed so much for the past month.

Today’s only planned stop was at Frank Slide in Blairmore, Alberta, where in April 1903 the side of Turtle Mountain came crashing down on the sleeping coal mining town of Frank and a nearby railroad work camp, killing about 90 of its 600 inhabitants. I wrote about Frank Slide last year and included pictures, but I wanted to include it again because it’s so impressive.  We didn’t have time to go through the interpretive center, but we viewed the rubble from viewing platforms and listened to a brief but informative talk by one of the young docents at the center.  The mountain, before the slide, was 400 feet taller than it is today and the mountain itself is thinner by 350 million tons of rock.  The docent noted that if the rock that fell in 1903 was stacked 5 feet wide and 20 feet high it would create a wall that would stretch across all of Canada. 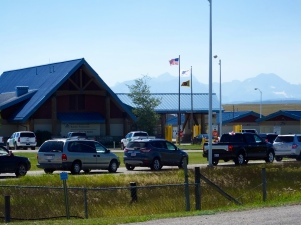 Only 30 minutes after leaving Blairmore, we were out of the mountains and onto the plains where strong winds blew across hay and alfalfa fields and turned the blades of huge wind turbines that dotted the ridge tops.  Before long we were digging out our passports at the Piegan Border Crossing near Babbs, Montana.  Only one border agent at one portal was on duty and it took 30 minutes to work through the line of  travellers waiting in their cars to get to us.

We politely answered the routine questions regarding guns, alcohol, fruits and vegetables, vanity license plate, and destination and were handed back our passports and allowed to enter the country where speed limits are higher and prices are lower.  It was good to be back.

Today’s ride was a long one.  Nearly 450 miles, so I had lots of time to think.  I thought about other rides I’ve taken.  I thought about last year’s ride through the Rocky Mountains, which twice took me through Wichita where I spent time with my mother.  It was the last time I would spend with her because she died several weeks after I passed through the second time.  Mom never did like motorcycles but she was glad I rode mine through Wichita.  Today would have been her 89th birthday.  Happy Birthday Mom.