Day 16: The End of the Alaska Highway 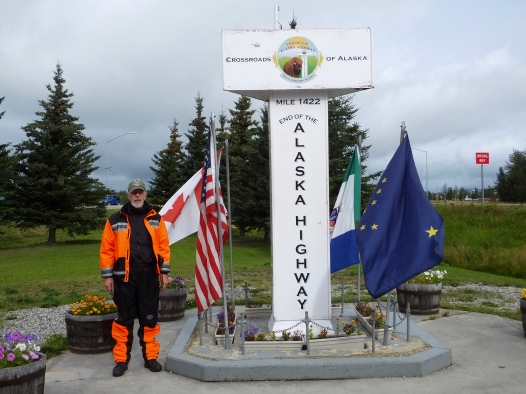 (Note:  If you went to yesterday’s blog post early yesterday, it’s been revised.  Please check out the revisions.)

(Note 2:  Don’t forget to click on the photographs to enlarge them.)

With that caveat out of the way, we reached both Fairbanks and the end of the Alaska Highway at Delta Junction today, important milestones in this year’s adventure.  I had warned Mark the Alaska Highway could be hard on motorcycles but he was determined to ride the entire route.  I was right about it being hard on motorcycles, though the only apparent damage this year was to my bike when a stone thrown by a passing RV cracked my Lexan windshield.  Mark’s bike is just filthy but will shine again with a little elbow grease and soap and water. 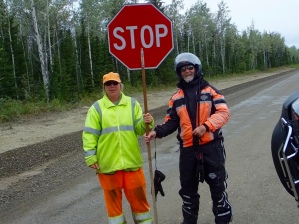 Today’s 13-mile stretch of road construction was relatively uneventful compared to yesterday’s 30+ mile public works project.  The wait for the pilot truck was only 10 minutes and the pilot in the truck maintained a steady 45-mph pace much of the time on a relatively smooth surface.  I decided that since I couldn’t beat the flaggers, I’d join them and went over to the dark side, forcing giant RVs to grovel in the gravel before me and the always-powerful STOP sign. 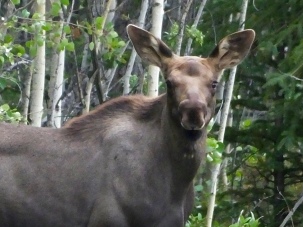 An abundance of ungulates marked today’s ride, as we were moosed on five separate occasions when five cows and five calves wandered down the sides of the roads and sometimes down the center of the road.  One cow was calfless, but another had apparently dropped twins last spring and the two young ones dutifully followed mom wherever she went.

Fortunately for us, she was content to hang around for awhile to have her picture taken with her offspring.  The other cows and calves quickly disappeared into the nearby trees and bushes.  I’m still waiting for a big bull with a record-setting rack to show up for a photo shoot.

At the visitor’s center at the end of the Alaska Highway in Delta Junction I asked the helpful attendant if a decent eatery existed nearby going north to Fairbanks.  She recommended Rika’s Roadhouse, noting they had good sandwiches, soup, pie . . . .  ‘Nuff said.  We headed up the road in a light rain to Rika’s Roadhouse. This was yet another serendipitous find adventures are made of.  Rika’s Roadhouse, it turns out, is part of a state park and historic site on the Tanana River that has been there more than 100 years. 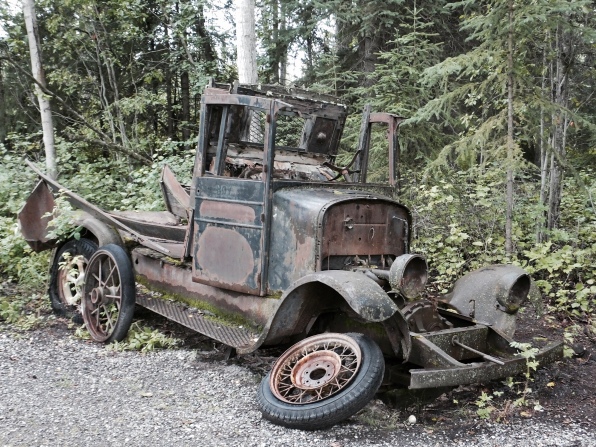 The building itself is on the National Register of Historic Places, and a dozen more buildings on the grounds constitute the historic site, including a cafe with the well-hidden name of The Smiling Moose, which served excellent soups, strong hot coffee and gratifying blueberry pie.  (I say well-hidden because we didn’t learn the name of the cafe until after we left.)

After lunch and to help my pie settle, I strolled the grounds, eager to learn a little more about this piece of preserved Alaska history.  The Tanana River Crossing with its ferry had been important during the gold rush days in the early years of the 20th century and was a station for both road crews and the military after gold fever subsided.  The Roadhouse provided rooms and dining opportunities for travelers, miners and workers and went through several hands before being bought by Swedish-born Rika Wallen in 1923, who operated it until the mid-1940s.  While I didn’t linger long, it was a productive stop both in terms of pie and history, two of my favorite things.  I left Rika’s in an increasing rain that grew worse as we neared Fairbanks and that made riding difficult the last 10-15 miles.

Tomorrow, the sun will come out and we’ll see Fairbanks and the surrounding area.  Should be an interesting day.

3 responses to “Day 16: The End of the Alaska Highway”