Day 7: A Day Adventures Are Made Of

Today unfolded with most of the ingredients motorcycle Adventures are made of.  We had 10 hours of hot and cold, wet and dry, windy and still, ubiquitous road construction, various animals, and, of course, unbelievably gorgeous scenery.  Oh yes, and pie.  In short, it was a great end to the first week of Alaska Redux.

Shortly after we left Cody at 7 a.m., we turned onto Chief Joseph Scenic Byway and shortly after we began the climb up Chief Joseph Scenic Byway we encountered road construction with severely reduced speed limits, one-lane roads and dirt bypasses that required a pilot car. While the construction didn’t last the entire 47 miles of the road, it did include some of the most scenic and exciting motorcycle sections of the Byway.  Still, on the sections unencumbered by orange cones and orange-vested flagmen, we had a good ride in perfect, early-morning weather.

The Chief Joseph Scenic Byway intersects with one of the iconic motorcycle roads in America–the Beartooth Highway (U.S. Route 212) that traverses Wyoming and Montana and peaks at 10, 977 feet at Beartooth Pass.  First opened in 1937 (but much improved since then), this road has some of the greatest switchbacks, twisties and scenic views available on a paved road.  But at nearly 11,000 feet the temperature can easily drop to below 50 on a day like today and the winds at the top make the cold even more chilling.

We no sooner reached the Beartooth Highway than both of us donned heated jackets over our thin warm-weather shirts.  Properly attired, we enjoyed the ride, stopping frequently to stand in awe at the amazing views.

At one popular viewing site we chanced upon a group of Germans touring on motorcycles and Richard-from-Stuttgart noticed that Mark wore the same HOG vest patch he did, and we struck up a conversation.  Turns out he was formerly in the German army and had been at the same base where my brother Jon had been stationed and the hometown of my sister-in-law Ulla, Wildflecken.  It’s a small world, even when you’re in Big Sky country.

After several stops in the 30-mile ride on the Beartooth Highway, we finished the morning  in Red Lodge at the Red Lodge Cafe where we each had a lunch of coffee and boysenberry pie.  It had your fruit, it had your grains–hey, it was a healthy lunch.

Arguing with an obstinate GPS that constantly wants you to  make U-turns is pointless, so despite protestations from our Garmins, we continued on the roads WE wanted to take.  Good thing, too, or we would have missed the herd of 25-30 elk mercilessly munching a rancher’s pasture.  Unfortunately, the road was shoulderless and there was no place to pull off and get a picture.  But it was fun to watch them watch us go by.

After a brief run on I-90, we returned to Montana back roads.  We watched storm clouds build to the south of us and hoped we would miss any rain.  But as we approached yet another road construction project that precluded stopping anywhere, big drops of rain pelted us and kept it up for about 15 minutes.  The drop in temperature and the wind chill of a 50 mph motorcycle made for chilly riding, but we knew (hoped) it would be short-lived.  After it stopped, we were dry in about 15 minutes, but it was a cold 30-minute interlude.

A beautiful ride through the Lewis and Clark National Forest and then a hot, flat-land finish into Great Falls completed the day’s ride.  Like I said, today had a little bit of everything, distinguishing an memorable Adventure from a mere vacation. 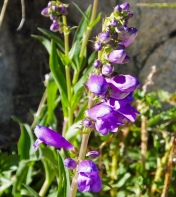 Tomorrow we end the day in Canada, eh, but not before we take on the challenging Going to the Sun Road in Glacier National Park.  I  can’t wait to get on the road again.

4 responses to “Day 7: A Day Adventures Are Made Of”