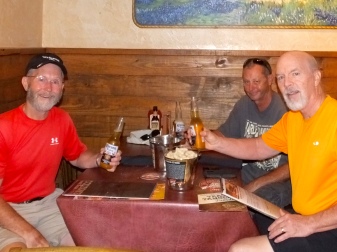 By 3:30 when we reached our Russellville, AR, destination the official temperatures had climbed into the mid 90s, but our unofficial thermometers on our Harleys were reading well over 100 degrees.  A dip in the tepid motel pool and a couple properly chilled Coronas helped bring things into a livable equilibrium and restore our failing senses.

For the first two hours this morning from 7-9 as we rolled westward on Tennessee back roads, we both remarked repeatedly on what a great ride it was.  Temps in the upper 60s and low 70s, almost completely empty roads as saints and sinners alike slept in this Sunday morning, and the occasional turkey, doe and buck by the roadside made for a memorable ride.  If we had only stopped after 100 miles, it would have been perfect.

But, alas, by 10 o’clock a blazing sun beat down and began to heat up the roads and the increasingly weary travelers thereon.  And, to make matters worse, steely-eyed and determined church people began arriving by the hundreds at the hundreds of small churches dotting the Tennessee countryside. I’m sure they’re all basically nice people, but I’m always afraid one of them might be awash in the throes of religious ecstasy, not paying attention to heathens on motorcycles, and inadvertently pull out in front of us.  Seriously, I do watch carefully as church parking lots fill up and then empty on Sunday mornings because automobiles with drivers nearing rapture pose a great hazard to two-wheel wayfarers. 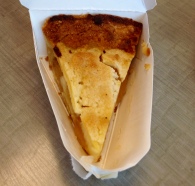 Cardboard pie in a cardboard container.

I was afraid finding pie today might be difficult since many Mom and Pop cafes close on Sundays.  Consequently, when a piece of apple pie made an unexpected appearance at a Burger King attached to the gas station where we refueled at 9 a.m., I broke down and got one.  I know, I know.  Burger King pie is to pie what a shopping catalog is to great literature, but desperate times call for desperate measures.  As it turned out, it was the only pie I would see all day.

We crossed from upper west Tennessee into the Missouri boot heel about 11 a.m. and what few rolling hills had engaged our ride in the morning were now behind us and before us were straight roads and flat, green fields of soybeans, corn and, ultimately, rice.  And heat.  By 11:30 the temperature was at 90 degrees and all the small towns we went through seemed to have gone on a shopping spree at the end of the fiscal year using left-over tax funds to buy unnecessary traffic lights that turn red at the barest hint of approaching motorcycle traffic. 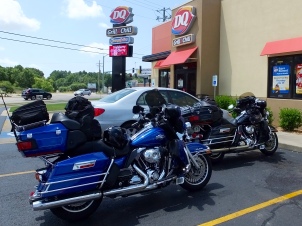 A Dairy Queen and a ride to Alaska.  Who could ask for more.

After about the 10th red light in Jonesboro, Arkansas, I’d had enough and pulled my hot bike and frazzled self into the first Dairy Queen I saw for a badly needed cool down. The frozen alabaster delicacy, which I learned was first made available at a DQ store in Joliet, Illinois, (my Dad’s hometown) in 1940, slaked my parched throat and provided sufficient energy to get me through the rest of the broiling ride to Russellville.

Mark and I left Dickson at 6:50, nearly an hour after my brother Jon left Wichita this morning.  But the timing was perfect since we pulled into our hotel within five minutes of each other.  A dip in the pool for Mark and me, Jack on ice for Jon, and then off to the steakhouse next door.  The food was adequate, the service marginally better, but the Coronas–oh, the Coronas–were just as kindly Hispanic brewmasters south of the border had created them to be.  Even without a lime (which the waitress embarrassingly admitted they were bereft of), the Coronas made the meal a satisfactory ending to a very hot day.

Tomorrow?  Probably hotter than today, but at least we’ll spend the first four hours going through the mountains and traversing the long and winding roads of northwest Arkansas before running the fiery gauntlet that will be the Kansas highways leading us to Wichita.