Welcome to hdriderblog.com 2016.  Once again the siren song (not related to the annoying wail produced by pursuing Law Enforcement Officers) of the open road  calls and in two days I’ll be “on the road again.”  The 2016 six-week, two-wheel Great Adventure will return me to Alaska, this time riding with a new accomplice in adventure–the recently retired Mark Stevens.

For readers joining in for the first time, I’m glad you’re going to follow along.  I’ll try to offer something each day to read with your A.M. java that’ll put a smile on your face and envy in your soul.  For returning readers, it’ll be more of the same– great roads, awesome pies, amazing views, new pies, interesting people, perfect pies, wondrous wildlife, and, of course, pie.  As always, please feel free to comment, to leave your mark on the blog.  It’s nice to know someone’s actually reading my digital scribbles.

Mark has been one of the most faithful followers of my blog for the past four years. Our riding history together, though, goes back 10 years when I first joined a HOG club in Jacksonville.  Mark has done long-distance riding on his own, but this 12,000-mile jaunt to the 49th State will be a new experience for him.  I suspect he’ll enjoy six weeks on the road as much as I have.  At least I hope so. 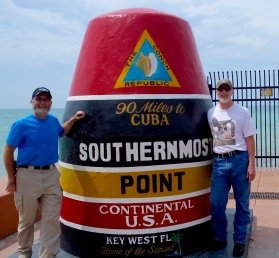 Three years ago when Marilyn and I rode to Alaska, we started by going first to Key West and then heading north.  Mark thought that would be a good way to start this trip, so at the end of March he and I made a three-day quick trip to the southernmost point in the United States and back to Orange Park.  It was a good precursor to the (much) longer leg of the ride destined for Fairbanks and back.  We had rain part of the time; we had hot sunshine part of the time; we had great ocean views; 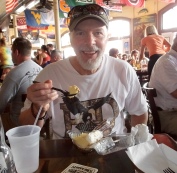 we saw some local Key West sights; we made lists of what we forgot to pack; and we had pie.  Key Lime pie, of course, at Sloppy Joe’s in Key West.  Best of all, we confirmed our compatibility as riding associates.

As I post this, Mark has begun his ride from Orange Park, stopping overnight at our mutual and envious friend John’s house in South Carolina before finishing his two-day ride to our Maggie Valley cabin tomorrow.  Saturday, we’ll load up and hit the road for 43 adventuresome days.

Adventuresome?  What’s in store?  Can’t say for certain, but we’ll be on great mountain roads in Wyoming, Montana, British Columbia and Alberta, before heading up the Alaska Highway beginning at Mile Marker 0 in Dawson Creek.  Once we get to Alaska, we’ll cover more than 2,000 miles on our Harleys, we’ll see some of that beautiful country by air and some of it by sea as we fly across Cook Inlet in search of Silver Salmon one day and try our luck with Atlantic Halibut sailing out of Soldotna another day.  I’ll return to places I’ve visited before, but I’ll also add new ones to my cruising catalog of motorcycle destinations. Not everything is or should be planned on a Great Adventure and the unplanned parts often seem to make the most memorable memories.  There’s usually something interesting around the next bend in the road–maybe a moose, maybe a museum, maybe a mountain, maybe a mystery.

Three years ago, when I blogged the Great Alaska Adventure, I said repeatedly I would return to the Land of the Midnight Sun.  I even thought it might have been the very next year.  But I’m fulfilling my pledge this year for Alaska redux.  Alaska year-round is not for everyone, including me.  But Alaska during the summer should be on everyone’s to do list, especially if natural wonders, multiple cultures, amazing wildlife, and a peak at the last frontier hold any interest.  I don’t subscribe to the idea that it was “folly” when Secretary of State William Seward purchased Alaska for 2¢ an acre in 1867.

We’ve planned and plotted, purchased and packed, and now we’re primed. One final check of our gear tomorrow, a toast or two with our good friend Jack Daniel, a few more goodbyes and the Alaska Redux Adventure that’s been a year in the making begins in earnest.  If you’re on two wheels, stay alert.  We will.

I can’t wait to get on the road again.