GRMA Day 38: Out of Kansas and into the Ozarks

My short family visit ended this morning as I left Wichita and headed into a blinding sun across eastern Kansas.  Brother Jon extended my family time a little by riding along for about an hour and a half before turning back at a coffee break in Fredonia, Kansas.  Nice to have him with me, at least for a while.  He talked about joining me for a trip in the future even if he’s not able to make it for the entire 4-6 weeks I like to be on the road. 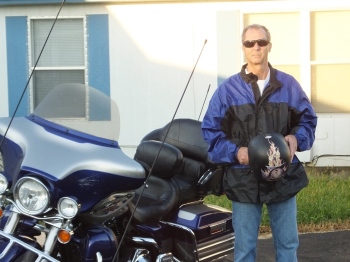 Jon, as I mentioned yesterday, is still riding my 2007 Ultra Classic, which I sold to him in 2011.  He’s not able to put a lot of miles on it, but he and his wife Ulla ride it when they can, even if its just in Kansas.

The first three hours of today’s ride was through Sunflower State, so it was pretty unremarkable, except for the early morning smells that always remind me how much we miss riding in cars with the windows up.  Huge fields of growing things have a fresh smell like nothing else that awaken the senses with every deep breath.

The real fun today began when Jon left after I rolled into Missouri and worked my way through the Ozarks’ rollercoaster hills and valleys and lakes.  This county doesn’t have the incredible scenery of the Rockies (am I spoiled?) but it has a beauty of its own.  I think I spent as much time on the sides of my tires as I did on the centers once I started working my way south and east into Arkansas. The back roads here have very road cuts; they just spread two lanes of asphalt on whatevery terrain happens to be there, a condition that makes it difficult to see what may be coming at you or, worse, parked in your lane.

Occasionally I could see the taller peaks of the Boston Mountains through the dense trees blanketing the hillsides in dark green, but most of the time, especially in the Ozark National Forest, my view extended only to the edge of the road where the trees began.  It made for a great ride, though, and I decided not to compete photographically with the Rockies and kept the camera in its bag.  Rather, I focussed on challenging the many twists and turns 10-20 mph above the speed recommended by the Missouri and Arkansas highway engineers.  Once I separated myself from the tourists in the bigger towns like Eureka Springs,  the near absence of traffic on the roads meant I could pickup the pace a notch or two and put my new front tire to good use.  The only wildlife I saw was a lone doe in the national forest who seemed confused as to which side of the road she preferred; her indecision brought me nearly to a halt before she finally moved off the road to my left and bounded into the trees.

I didn’t even mind the “road closed” detour that added about 30 miles to my ride on a road I had thought about taking and, initially, had rejected.  I think it was a better motorcycle road than the one that would have taken me to the Interstate 30 minutes faster.

With my orange “low fuel” light glaring at me from the gauge cluster, I finally ended the ride in Russellville, found a motorcycle friendly motel that charged me even less than my AARP discount would have provided, and parked the bike for the night.  I’ve decided to make an Interstate only run tomorrow that will be boring but will bring me a little closer to home for the final push.  I’ll be rewarded for tomorrow’s Interstate ride with a shorter final day that will allow me to take a celebratory spin through the Smokies before the Adventure ends at the cabin in Maggie Valley.

2 responses to “GRMA Day 38: Out of Kansas and into the Ozarks”