GRMA Day 34: The Loop is Completed

The goal for this year’s Great Adventure was to loop the Rocky Mountains–from the southern end in New Mexico to the northern in the Yukon Territory and back.  When I rolled into Pueblo, Colorado, late this evening, the loop was completed since this is where I began 28 days ago.  I haven’t seen all the many ranges and sub-ranges in the Rockies, but I’ve sure seen a lot of them.  And they were all I expected and more.  Mountains–especially the Rockies–produce in nearly everyone who sees them feelings of awe and wonder and amazement and reverence and more.

I never tired in four weeks of waking up to them, riding through them, stopping to drink them in and trying to understand them from both a scientific and an emotional perspective.  There’s an old saying that if a biker has to tell you why he (or she) rides a Harley, you wouldn’t understand anyway.  Maybe that’s the way it is with mountains.  If you can see them, be in them, hike through them, ride through them and still don’t understand why they’re special, nothing I could write or say or photograph would really help you understand.

I had initially thought about taking a quicker route today involving considerable Interstate riding.  But this morning, when I realized this was my last day in the mountains (for a while), I turned off the GPS route I had pre-loaded and just headed south from Linda’s ranch in Laramie.  I had a vague idea where I would be going, so I mainly just kept my eye on my compass and rode mostly south with some east/west roads thrown in as needed.  The result was that I rode on roads I’ve not been on before and just sat back and cruised through curves and the ups and downs enjoying the view and my additional few hours in the mountains.

The only stop I had planned for today, and the only place I took pictures was Pike’s Peak, about 50 miles from my Pueblo destination.  The road is now fully paved and doesn’t offer the challenges it once did when drivers risked life and limb on gravel and rock much of the way to the top.   But the dozens of hairpin turns with no guardrails and near vertical drops of hundreds of feet still keep your attention as you climb from about 6,000 feet to over 14,000 feet.  Unfortunately, like many other places I’ve been on this adventure, there were too many people.  And many of those people don’t understand that they shouldn’t stop on an 8% grade coming out of a hairpin turn when there’s a motorcycle behind them.  Or not to stop in the middle of the road to look at wildlife because there was no room for any shoulder.  I made it to the top with no accidents (motorcycling is safer than fishing, after all) but I did express myself bluntly to a couple drivers who should have stayed on flat ground. 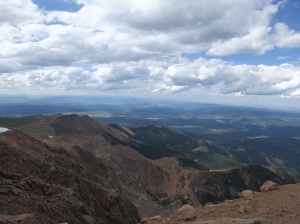 Three years ago I rode to the top of Mt. Evans in Colorado, the highest paved road in the United States.  The ride was more challenging and there were a lot fewer people at the top.  The view was pretty much the same (damned awesome) and I guess I’d recommend the Mt. Evans ride over Pike’s Peak.  In either case, be prepared for a temperature drop of about 50 degrees.  It was about 93 in Colorado Springs and about 43 at the top of Pikes Peak.

I hadn’t planned on doing any wildlife shooting today, but since a hearty band of Big Horn Sheep made the 14,000 foot climb to the top, I took a couple shots of some ewes that were nearby.  The ewes, with their shorter, slender horns don’t make for dramatic photographs the way the males do.  I heard several people refer to the “mountain goats” but I decided not to correct their errant identification.  If they want them to be goats, let them be goats.

Tomorrow I turn my back to the mountains and travel across one of the flattest states in the union on my way to another family visit in Wichita.  But, after I’ve travelled several more days, I’ll be back in the mountains of Western North Carolina, and those will do just fine.  I’m going to keep writing everyday until this Adventure ends when I roll down my driveway in Maggie Valley, so keep checking in to see where I am and what I’m up to.

3 responses to “GRMA Day 34: The Loop is Completed”