(Pictures on today’s blog can be enlarged by clicking on them.)

In many ways I really hated to watch Canada recede in my rearview mirror after I crossed the border at the Chief Mountain checkpoint about 3 p.m.  The scenery and the people there are absolutely first rate.  But I have to admit its nice to be back where I don’t have to convert everything:  money, temperature, measurements.  Uh, 77.6% of $23.78 = ???  Uh, 19 degrees centigrade is something times something plus (or minus?) 32 =  something Fahrenheit. (Heck with it, it’s cold enough for heated gear) Uh, 90 kph x 1.6 = 144 mph (Sorry officer).  I’m only 65 clicks from where I’m headed.  Wait, is a click the same as a tap?  No that’s converting Windows to iPad.  ARRRRGGGHH!  But I will miss Canada and its people and I will return again someday. 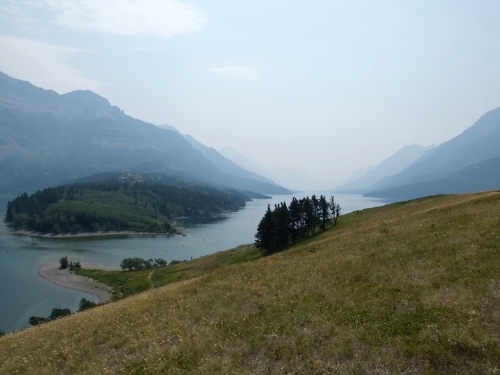 My last day in Canada on this trip found me at Waterton Lakes National Park, which is right across the border from Glacier National Park.  Glacier was my original destination for the day because I wanted a repeat run on the indescribably beautiful Going to the Sun Highway.  But a forest fire has closed that road, so I opted for the Canadian end of the international Peace Park.  Smoke from the Glacier NP fire 50 miles away obscured much of the long-range views in Waterton Lakes, but what I could see was beautiful, though not as dramatic as the higher peaks a little further south. But the smoke didn’t keep the hoardes of people away.

Like many beautiful national parks (Great Smoky Mountains, Yellowstone, Jasper and Banff), the inordinate beauty of Waterton Lakes attracts tourists like ants at a picnic.  People were everywhere:  The streets in the little town were clogged; the roads in the park teemed with SUVs and rental cars filled with familes from all over the world; even some of the trails were jammed with people to the point where I decided to blow off a hike I had planned to take to aan amazing canyon carved in some remarkable red rocks.

Fortunately, I arrived in the park by 9 a.m. and some tourists either hadn’t arrived or hadn’t woken up, so the first couple of hours weren’t too bad.  There are two spur roads in the park  They call them parkways but the condition of the roads makes that a gross overstatement. I selected the furthest south of the two to explore first and, to my delight, that road ended at a small lake.  Even more delightful, there was a concessionaire renting kayaks.  Readers who followed my Newfoundland blog may see a trend developing.  While there were no icebergs on the lake, I spent a pleasant couple hours paddling around the lake, spying a doe drinking at the shore and looking up at the hazy peaks that surrounded the lake.  A couple in a rowboat agreed to take my picture with my old (expendable) camera but there wasn’t much we could do about the smoke that hazed the mountain I wanted for my backdrop.  You take what you can get.

I also found another couple desperately trying to avoid going in circles in their canoe but usually failing who also took pictures of me. They were a nice couple, but listening to their conversation echoing across the lake was comical:  “Paddle right. No, you paddle right.  OK. Now left.  No, back up.  No the other side.  No I’ll go right you go left.  I’m not going to do anything.  You paddle. We’re still going in a circle.”  Eventually they made it back to the dock, no doubt exhausted and poorer by the amount of time they spent going in circles x $35 an hour.

I spotted a really nice black bear and a mountain goat while riding the spur roads, but the narrow roads had no shoulders and there was no place to stop, so I missed out on those photo ops.  The bear really would have been nice because he was big, dark black with a brown nose.  It was fun, though, watching him wander through the thick brush for a few seconds as I drove slowly by.

A huge hotel dominates the small town of Waterton in the park, one of the old-style resort hotels that catered to the better class of tourists when the seven-story, French-inspired hotel was built in the 1920s.  I had heard about the Prince of Whales hotel from several people I had met and wondered what the connection was to the ocean, which lies so far away from Alberta.  Turns out it was Wales, not Whales.  Big difference.

Well, another tip of the cap to visitor-center-Heather who recommended this national park as my alternative to Going-to-the-Sun Highway.

When I passed the entrance to Going to the Sun Highway an hour after re-entering the U.S. I looked up the valley where the road would go.  I couldn’t see much of anything because of all the smoke hanging in the air, choking off the beauty of one of America’s great natural resources.  It’s a shame.  Unfortunately, as the climate continues to change, these kinds of fires, as we are already seeing, will be one of the costs.

Tomorrow I’ll head for Bozeman and try to leave the smoke behind me.

More pictures I liked from today: