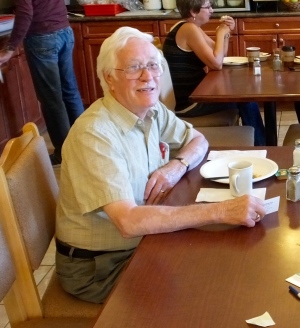 The Yukon Territory and British Columbia are big places, but it’s still a small world.  Two nights ago when I stayed in the Air Force Lodge at Watson Lake, I met an older couple named Alex and Shirley Jackson from Ontario and had a brief conversation about the Lodge, the roads, where are you going, etc.  We said goodbye and parted ways.  This morning when I was at breakfast in my hotel, there they were again, and again we engaged in small talk.  Shirley mentioned that they had a relative who worked at the museum on the edge of town.  “It isn’t Merl, is it?” I said.  Why yes, she said, Merl is Alex’s cousin.  For those who followed the blog when Marilyn and I went to Alaska two years ago, Merl was the man who started the Museum and who told me all about his antique car collection. Click here to link to the page where I discussed the Fort Nelson Museum and my encounter with Merl.  The picture to the right is Alex, Merl’s cousin.  It is, indeed, a small world.

The first part of today’s ride was unremarkable and unexciting.  In fact, I spent four straight hours in the saddle from Ft. Nelson to Fort John, a distance of about 240 miles.  My gas light was on when I got to St. Johns.  There were occasional glimpses of the mountains to the west, but most of the time it was forested hills, including one blackened stretch of several miles that had recently burned and still smoldered in places.  Oh yeah, and road construction.  Dusty, bumpy, gravelly road construction made more unpleasant by hundreds of trucks servicing the area’s oil field boom.  I was looking for something better in the final 100 miles of the ride to Chetwynd.

And I found “something better” in the form of the Peace River Valley, a beautiful farming valley probably carved by glaciers hundreds of thousands of years ago.  In the distance I could see the Rockies where I’ll be riding tomorrow.  The valley, by the way, will be buried under a reservoir in the next 10 years or so as B.C. Hydro builds a third in a series of dams on the Peace River.  It was , for today at least, a lovely one-hour ride through the valley to Hudson’s Hope, which I had singled out as my main stop for the day.  Hudson’s Hope has a connection to the old Hudson’s Bay Company and is one of three oldest European settlements in British Columbia, having been occupied by fur trader Simon Fraser in 1805.  The town has a small museum, which I visited because I like to get the feel of an area via its past.

The primary feature near Hudson’s Hope is the W.A.C Bennet dam, the largest earthen damn in British Columbia and one of the largest in the world.  Built by B.C. Hydro (a power company) in the 1960s, the generators buried deep below the dam can supply 1/3 of the power needed for the entire province.  All the fill in the dam (rocks, gravel, soil, silt) came from a nearby glacial moraine and was moved to the dam site by the world’s longest conveyor belt, nearly six miles long.  BC Hydro offer tours of the site, so following my guide Katy (on the left in the picture), I saw where the 10 huge turbines spun by water flowing through 10 huge underground pipes generate a massive amount of power.  The dam is 1 1/4 miles long across the top and half a mile wide at its base on the canyon floor and the 500′ deep lake it creates is more than 220 miles long.   It was an informative visit and worth the one-hour stop.

No pie today and only one animal, a deer munching along the side of the road.  And I was in prime moose country, I was told.  Maybe tomorrow I’ll bag a moose.