So, I’m in Canada again, eh?  This is my second favorite country, and the next 11 days or so should be great riding and better site seeing, eh?  Even though I’ve been gone from Canada for a year, I’ve picked up the language again pretty quickly, eh?  Now I just have to figure out centigrade, liters, loonies and toonies all over again, eh?

This Idaho farmer has a sense of humor as he touts his “bumper crop.”

After following tracing the winding course of the Clearwater River for the last two days, I had a few brief glimpses of it again this morning as I climbed the steep bluffs north of that beautiful, historic river.  And then I headed cross country for what I expected to be a 2-3 hour ride across mostly barren, desert-like land.  But the roads and countryside provided a pleasant surprise as I rolled through high foot hills, golden farm country and green-timbered mountainsides that provided more than enough variety and twisties to keep the ride interesting. 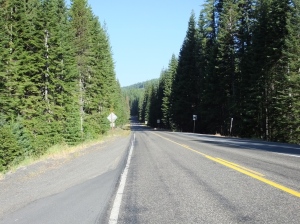 A canyon of trees lined the Idaho highway. Log trucks rolled by frequently with loads of their bretheren.

When I plotted the route several months ago, I made it a point to stay off the roads the mapping program wanted me to take.  They would have been faster but far less interesting.  Today I followed several roads designated as “Scenic Highways” including one that took me along the east coast of Lake Couer d’Alene for 30 miles with the lake almost always in sight.  If I wanted to look at the lake, though, I generally had to find a place to pull over because the twists and turns 20-40 feet above the rocky shoreline came so fast that even a two- or three-second glance could have had me launched on an unplanned downhill slide to the lake.

Lake Couer d’Alene is a natural lake that stretches more than 50 miles.

North of Couer d’Alene several more large, deep-blue, lakes created by retreating ice sheets hundreds of thousands of years ago provided great views with significant but not massive mountains always in the background.

This is the view about 20 miles from the U.S.-Canada border.

Northern Idaho is in some ways a state apart from the southern portion and always has been because of the mountains that divide the state and the considerable time it once took to drive from one section to the other.  Evidence of that separateness, I discovered to my confusion and consternation, is that the northern part of Idaho is on Pacific Time, not Mountain Time like the southern half.  That explained why I always seemed to be early everywhere I went for the first 15 hours of my recent stay in Orofino.  I thought people there were just slow getting started in the morning.  Breakfast wasn’t quite ready at the motel when I went down at 7 a.m. and the dining area was empty.  Except that it was really 6 a.m. and that’s when the staff set up the morning buffet.  And the NPS Visitors Center on the Reservation only had two other visitors besides me at 9:10.  Except that it was 8:10 and they had only been open 10 minutes.  Kevin, whom I introduced yesterday, set me straight on the correct time.  Once again the Nez Perce helped out the white visitor.

Front tire in Canada. Rear tire in US.

I crossed into Canada about 2:15 (Mountain Time) this afternoon after waiting in the sun in a line of cars for about 25 minutes before the border agents decided to open a second portal for cars to pass through.  When I drove up to my portal and promptly handed over my passport, Humphrey-the-border-agent asked all the usual questions (guns? alcohol?  where was I going?  How long?, etc.).  Then, having seen my DR DZ HD license plate, he asked if I was a medical doctor.  No, I said, Ph.D.  “So,” said Humphrey,  “Doctor Dizzy Head, eh?”  “No,” I explained, “Dr. D’s H(arley) D(avidson).”  “Well,” he said, “have a nice stay in Canada, eh?”  Humphrey isn’t the first to make the Dizzy Head reference.  Maybe I’ll just go with that.

I had never had Kaluha Cream Pie before, and when the opportunity presented itself at the View Cafe across the highway from beautiful Lake Cocolalla I jumped on it with a fork.  I’ve had better pie, but this and a hot cup of java made for a nice lunch.

I’m in sight tonight of the massive Canadian Rockies, rising high to the east of Cranbrook where I’m staying at a real mom and pop “Model A” motel.  That’s really the name of it.  The “Model A Inn” and there’s a non-running Ford Model A out front that belonged to the original owner’s wife; each of the three times the motel has been sold, Daphne-the-clerk told me, its namesake went along for the ride, as it were.  But no pictures of those majestic mountains tonight because I don’t want to include all the extraneous clutter of the city’s stripmalls and powerlines.  Tomorrow I’ll present them in their natural awesomeness.

So, tomorrow I’ll head up the Icefields Parkway for the first time this trip.  I’ll ride it again going south after I’ve looped around the northern end of the Rockies in a week. 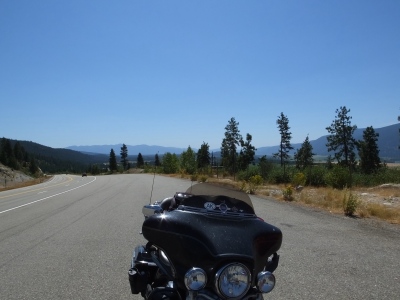